Borůvka's Algorithm is a greedy algorithm published by Otakar Borůvka, a Czech mathematician best known for his work in graph theory. Its most famous application helps us find the minimum spanning tree in a graph.

A thing worth noting about this algorithm is that it's the oldest minimum spanning tree algorithm, on record. Borůvka came up with it in 1926, before computers as we know them today even existed. It was published as a method of constructing an efficient electricity network.

In this guide, we'll take a refresher on graphs, and what minimum spanning trees are, and then jump into Borůvka's algorithm and implement it in Python:

A graph is a abstract structure that represents a group of certain objects called nodes (also known as vertices), in which certain pairs of those nodes are connected or related. Each one of these connections is called an edge.

A tree is an example of a graph: 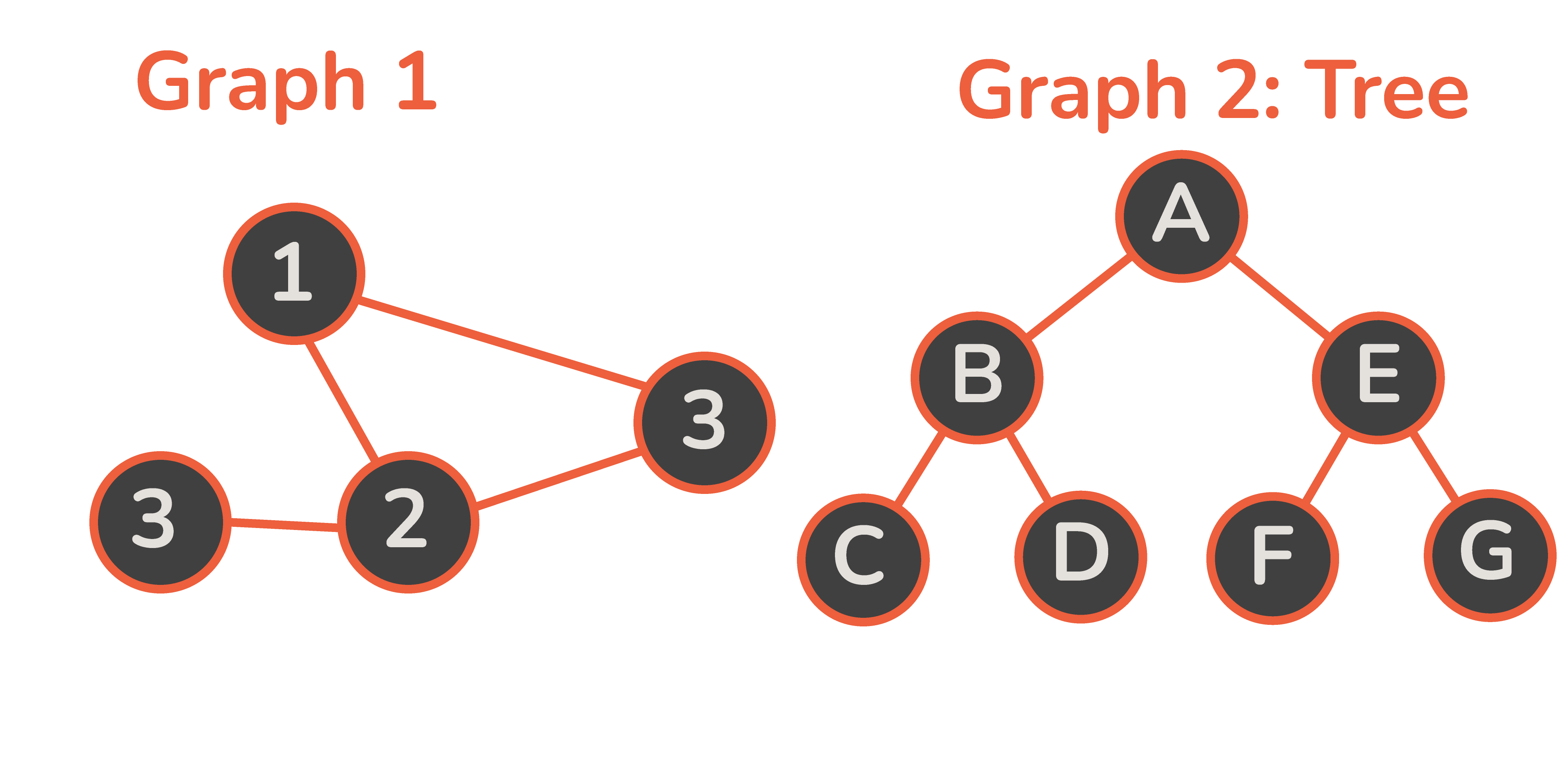 In the image above, the first graphs has 4 nodes and 4 edges, while the second graph (a binary tree) has 7 nodes and 6 edges.

Graphs can be applied to many problems, from geospatial locations to social network graphs and neural networks. Conceptually, graphs like these are all around us. For example, say we'd like to plot a family tree, or explain to someone how we met our significant other. We might introduce a large number of people and their relationships to make the story as interesting to the listener as it was to us.

Since this is really just a graph of people (nodes) and their relationships (edges) - graphs are a great way to visualize this: 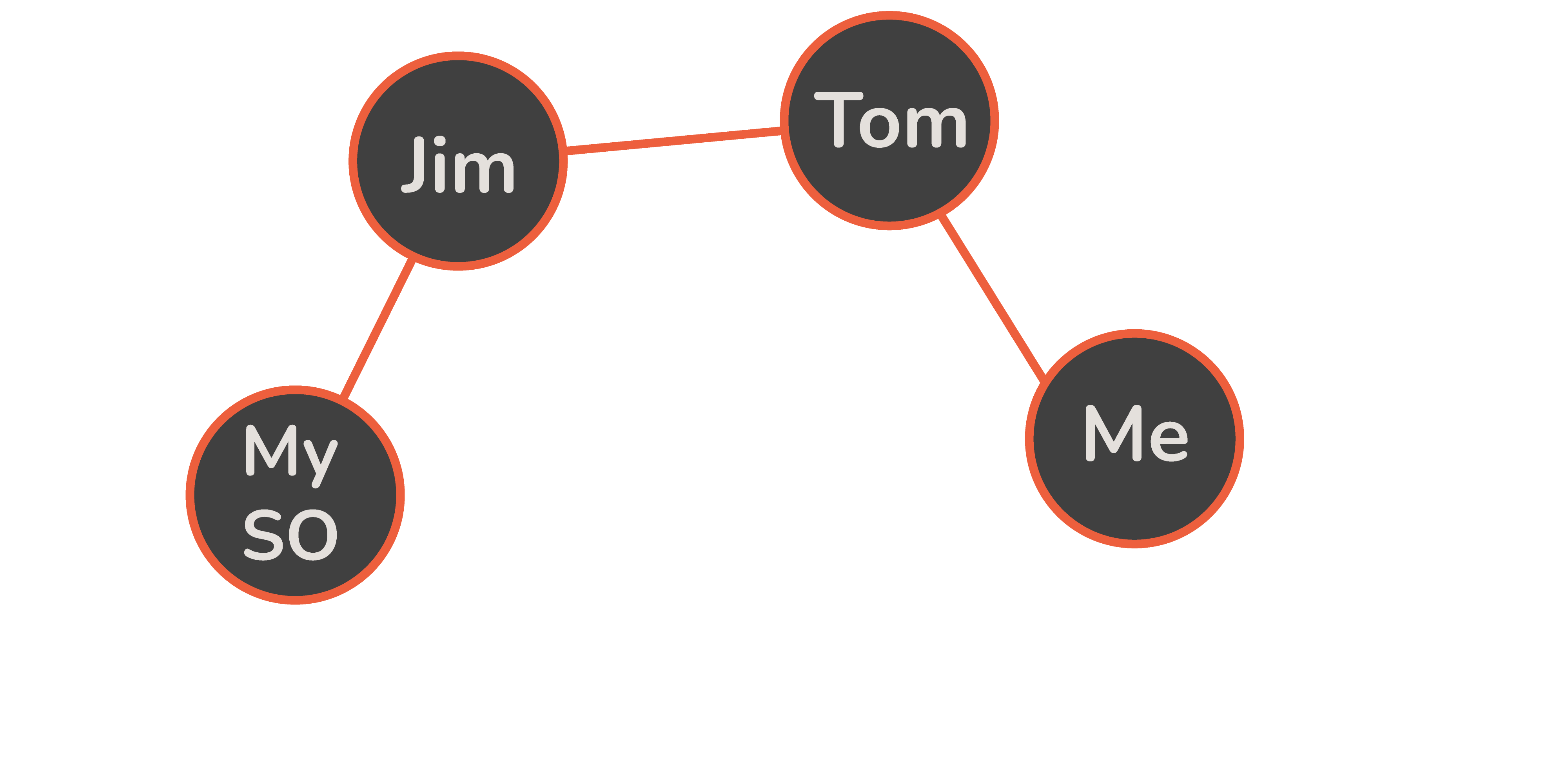 Depending on the types of edges a graph has, we have two distinct categories of graphs:

Formally, we can define an undirected graph as G = (V, E) where V is the set of all the graph's nodes, and E is a set that contains unordered pairs of elements from E, which represent edges.

A directed graph is a graph in which the edges have orientations.

Formally, we can define a directed graph as G = (V, E) where V s the set of all the graph's nodes, and E is a set that contains ordered pairs of elements from E.

The direction of an edge is denoted with an arrow. Keep in mind that two-sided relationships can be shown either by drawing two distinct arrows or just drawing two arrow points on either side of the same edge: 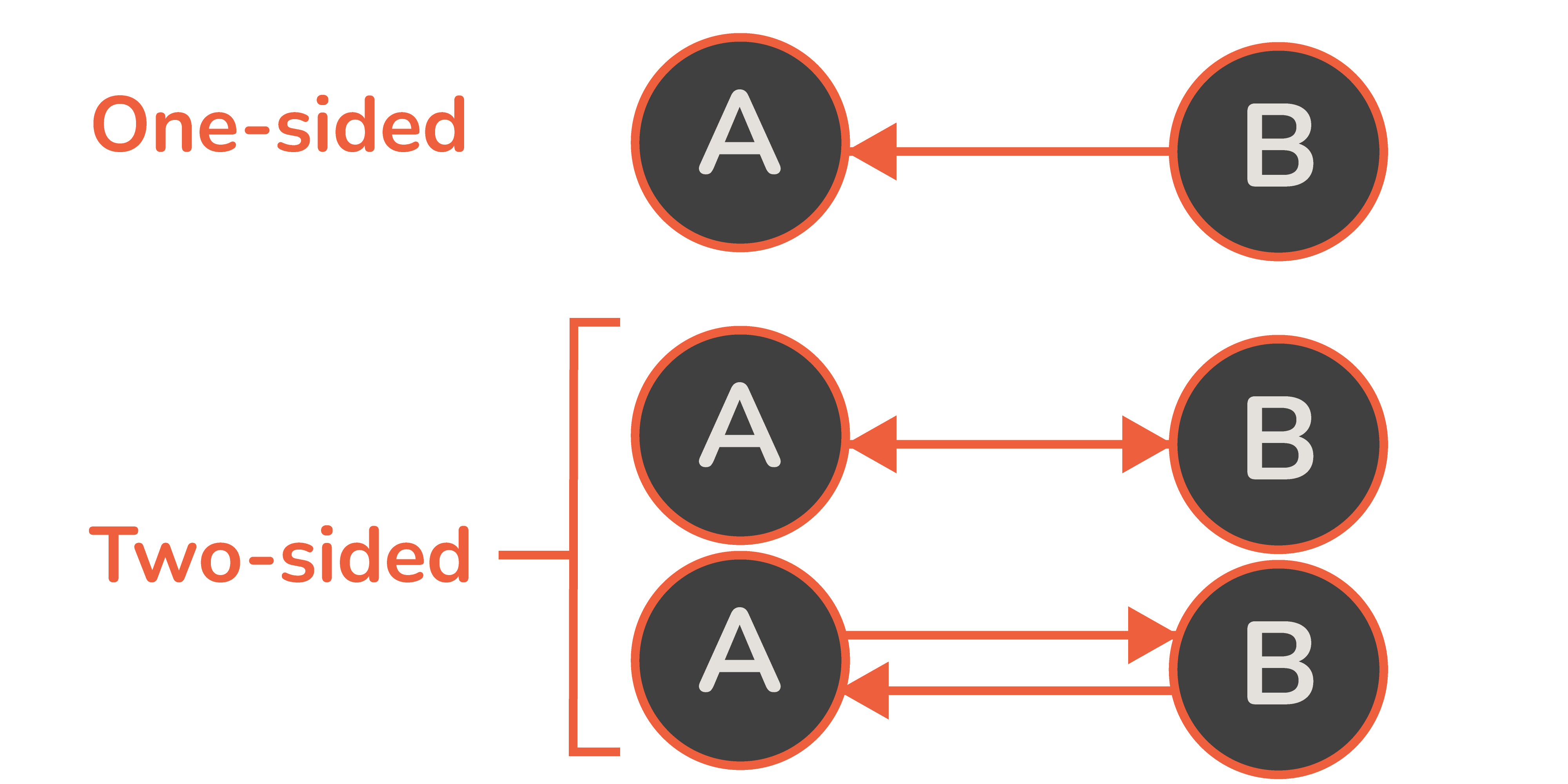 Another way to differentiate graphs based on their edges is regarding the weight of those edges. Based on that, a graph can be:

A weighted graph is a graph in which every edge is assigned a number - its weight. These weights can represent the distance between nodes, capacity, price et cetera, depending on the problem we're solving.

Weighted graphs are used pretty often, for example in problems where we need to find the shortest or, as we will soon see, in problems in which we have to find a minimum spanning tree.

An unweighted graph does not have weights on its edges.

Note: In this article, we will focus on undirected, weighted graphs.

There's a fair bit to be said about trees, subgraphs and spanning trees, though here's a really quick and concise breakdown:

Now that we're covered in terms of graph theory, we can tackle the algorithm itself.

The idea behind this algorithm is pretty simple and intuitive. We mentioned before that this was a greedy algorithm.

When an algorithm is greedy, it constructs a globally "optimal" solution using smaller, locally optimal solutions for smaller subproblems. Usually, it converges with a good-enough solution, since following local optimums doesn't guarantee a globally optimum solution.

Simply put, greedy algorithms make the optimal choice (out of currently known choices) at each step of the problem, aiming to get to the overall most optimal solution when all of the smaller steps add up.

You could think of greedy algorithms as a musician who's improvising at a concert and will in every moment play what sounds the best. On the other hand, non-greedy algorithms are more like a composer, who'll think about the piece they're about to perform, and take their time to write it out as sheet music.

Now, we will break down the algorithm in a couple of steps:

This algorithm takes a connected, weighted and undirected graph as an input, and its output is the graph's corresponding minimum spanning tree. 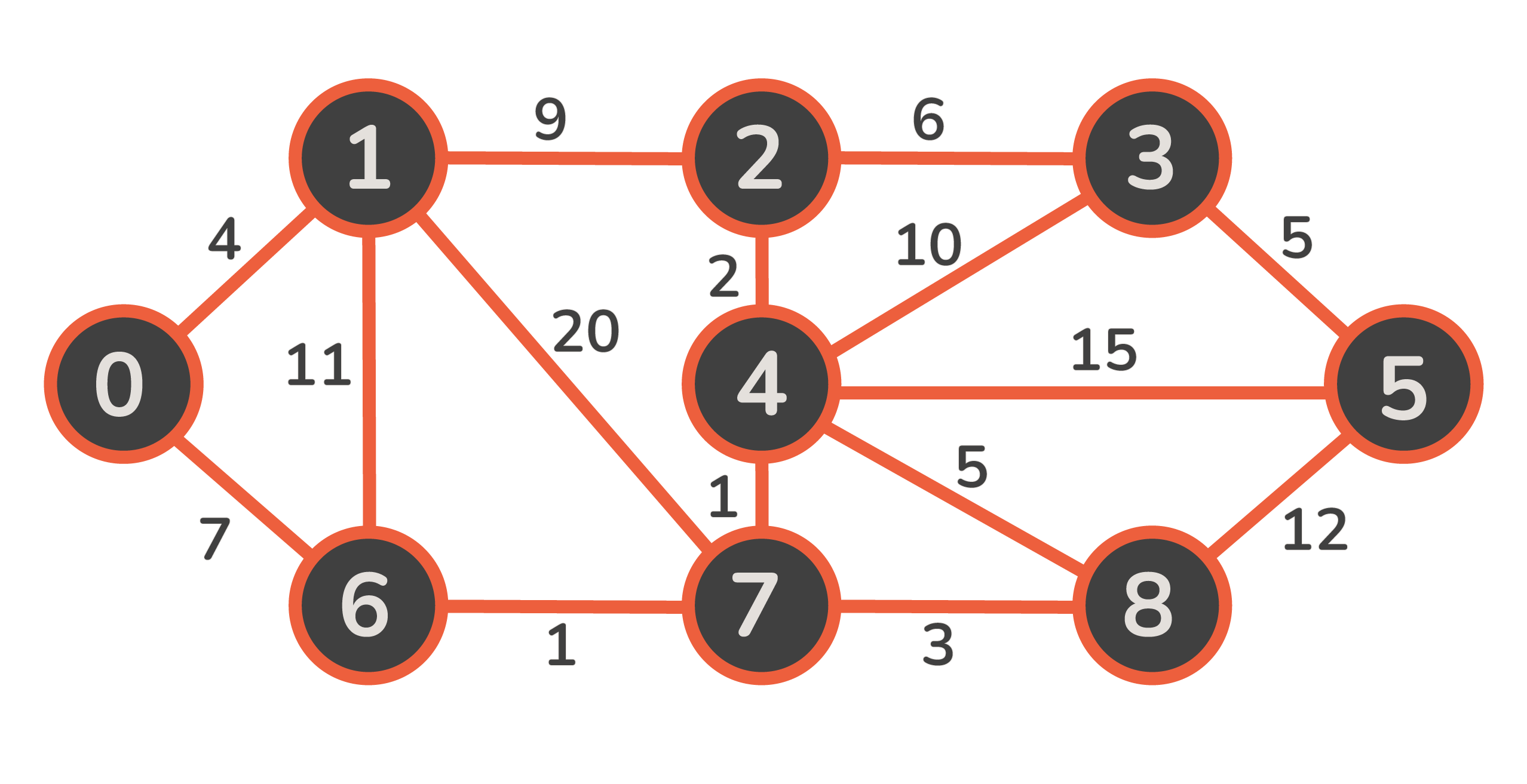 At the start, every represents an individual component. That means that we will have 9 components. Let's see what the smallest weight edges that connect these components to any other component would be:

Now, our graph is going to be in this state: 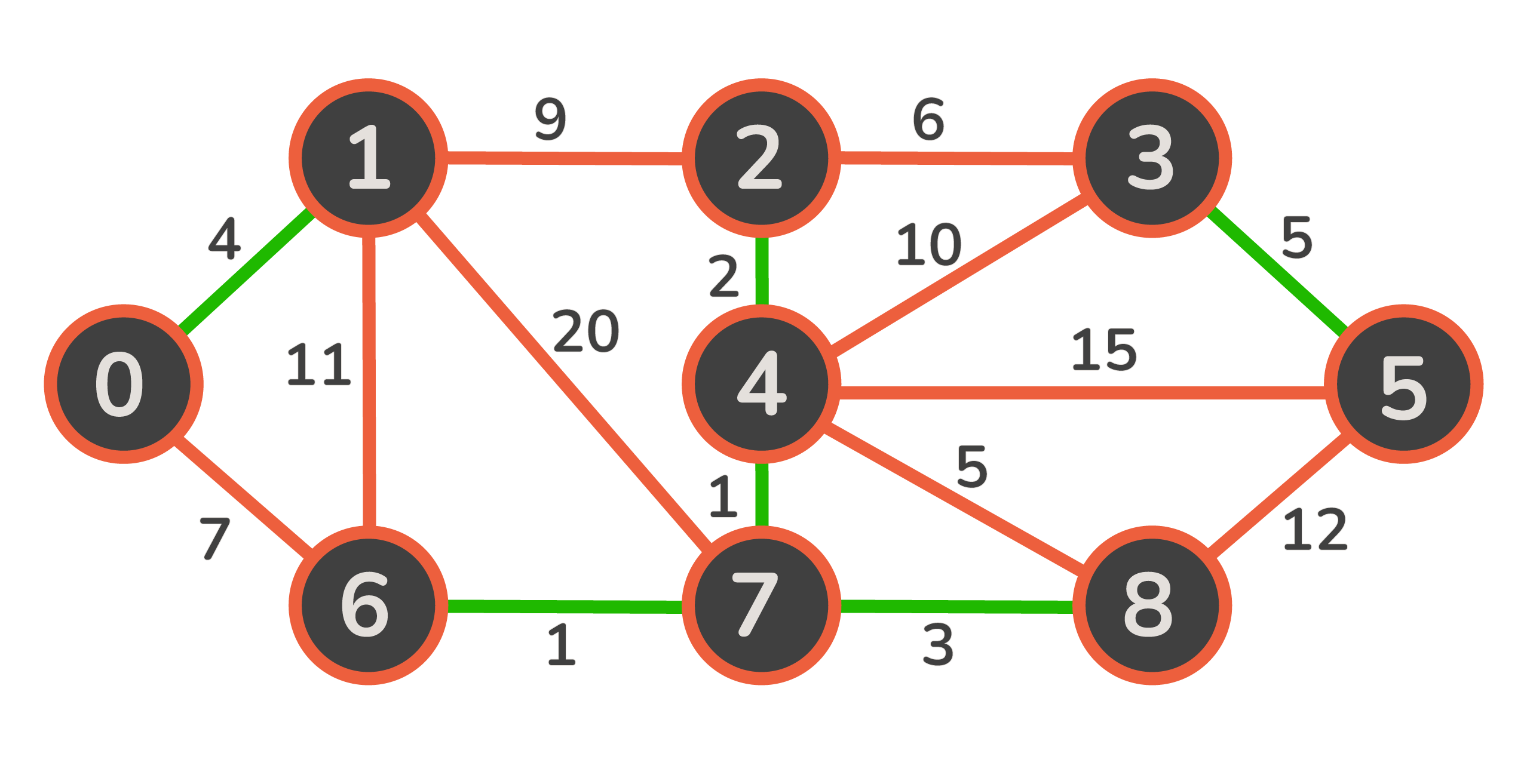 Now, our graph is going to be in this state: 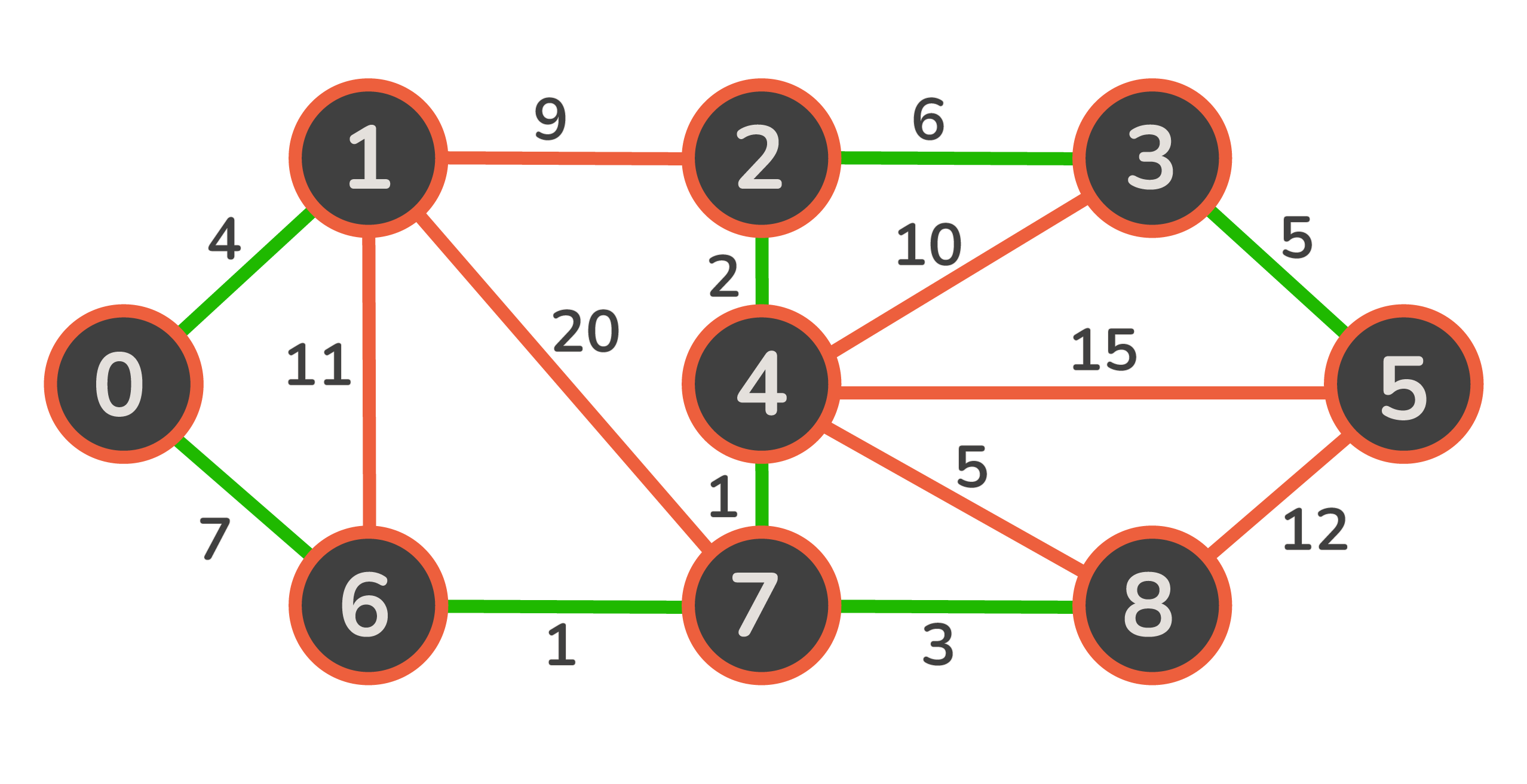 As we can see, we are left with only one component in this graph, which represents our minimum spanning tree! The weight of this tree is 29, which we got after summing all of the edges: 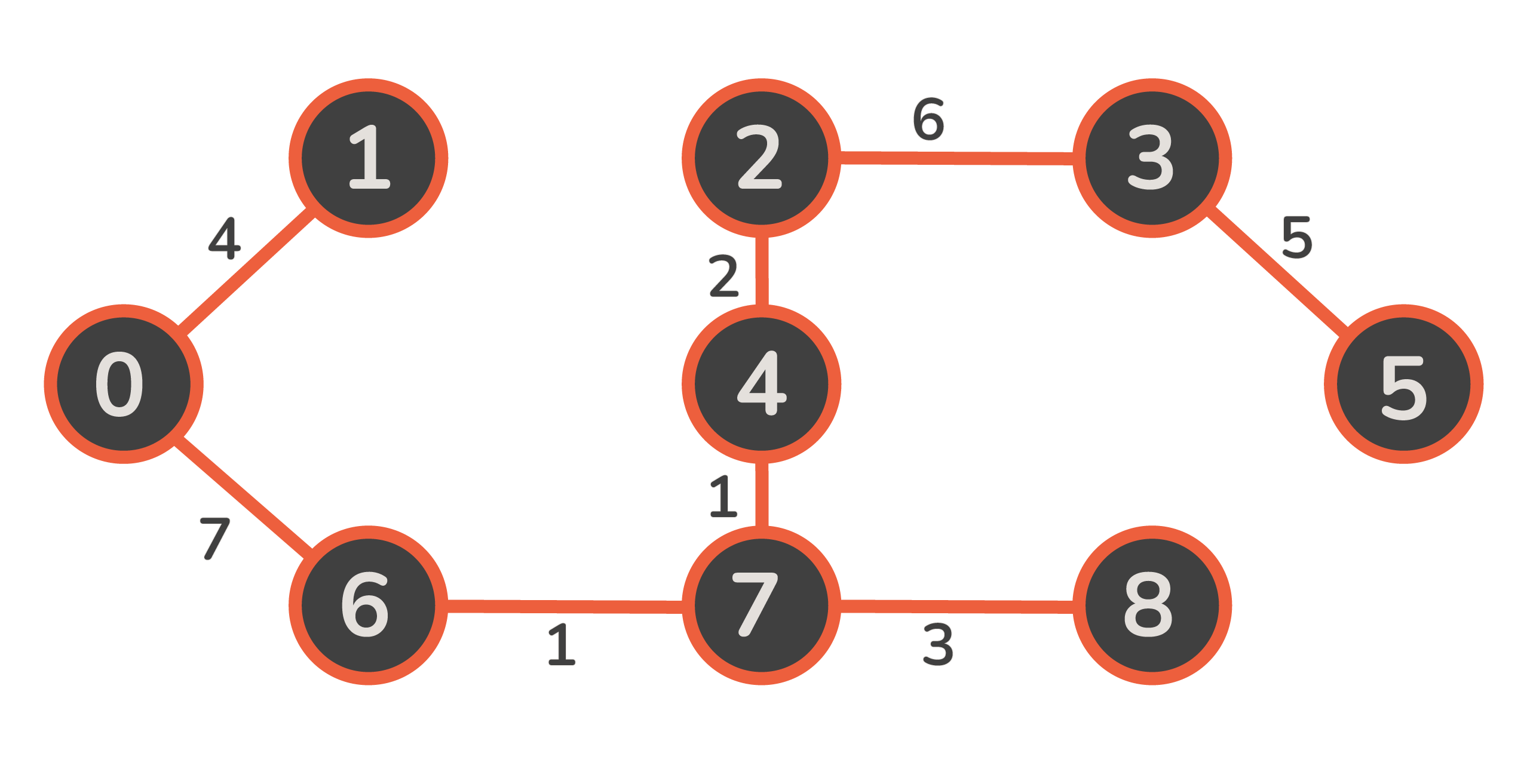 Now, the only thing left to do is implement this algorithm in Python.

We are going to implement a Graph class, which will be the main data structure we'll be working with. Let's start off with the constructor:

In this constructor, we provided the number of nodes in the graph as an argument, and we initialized three fields:

Now, let's make a helper function that we can use to add an edge to a graph's nodes:

This function is going to add an edge in the format [first, second, edge weight] to our graph.

In this method, we will artificially treat the dictionary as a tree. We ask whether or not we've found the root of our component (because only root components will always point to themselves in the m_component dictionary). If we haven't found the root node, we recursively search the current node's parent.

Note: The reason we don't assume that m_components points to the correct component is because when we start unifying components, the only thing that we know for sure won't change its component index is the root components.

For example, in our graph in the example above, in the first iteration, the dictionary is going to look like this:

We've got 9 components, and each member is the component by itself. In the second iteration, it's going to look like this:

The last method we're going to need before implementing the algorithm itself is the method that unifies two components into one, given two nodes which belong to their respective components:

Finally, if the components are of same size, we just unite them together however we want - in this particular example we did it by adding the second one to the first one.

Now that we've implemented all the utility methods we need, we can finally dive into Borůvka's algorithm:

The first thing we did in this algorithm was initialize additional lists we would need in the algorithm:

Then, we go through all of the edges in the graph, and we find the root of components on both sides of those edges.

After that, we are looking for the minimum weight edge that connects these two components using a couple of if clauses:

After we've found the cheapest edges for each component, we add them to the minimum spanning tree, and decrease the number of components accordingly.

Finally, we reset the list of minimum weight edges back to -1, so that we can do all of this again. We keep iterating as long as there are more than one component in the list of components.

Let's put the graph we used in the example above as the input of our implemented algorithm:

Chucking it in the algorithm's implementation will result in:

The space complexity of this algorithm is O(V + E), since we have to keep a couple of lists whose sizes are equal to the number of nodes, as well as keep all the edges of a graph inside of the data structure itself.

One advantage that Borůvka's algorithm has compared to the alternatives is that it doesn't need to presort the edges or maintain a priority queue in order to find the minimum spanning tree. Even though that doesn't help its complexity, since it still passes the edges logE times, it is a bit more simple to code.