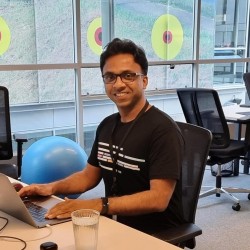 In this article, we'll cover the process of creating a Docker image of a Spring Boot application, using Dockerfile and Maven and then run the image we've created.

The source code for this tutorial can be found on Github.

If you'd like to read more about Docker, we've covered it in detail in - Docker: A High Level Introduction.

Let's start off with a simple Spring Boot Application. The best way to start with a skeleton project is to visit Spring Initializr. Select your preferred version of Spring Boot, and add the "Web" dependency. Generate it as a Maven project and you're all set!

The project includes a simple REST controller with a single mapping that just expects a name as the path variable and then generates a string to greet it:

To run the application, use the following Maven command from the project root folder:

As usual, the application will be running on port 8080. To test this endpoint, navigate your browser (or use curl, postman, etc.) to "http://localhost:8080/greet/john", you will see a response that looks something like:

Now let's dockerize our previously made Spring Boot Application. We will cover the two most commonly used approaches:

A Dockerfile is just a regular .txt file that includes native Docker commands that are used to specify the layers of an image. To do so, let's create a text file named "Dockerfile":

Let's take a look at the commands and fully understand them before proceeding:

More documentation can be found on the Dockerfile reference page.

Before moving further, we need a Spring Boot .jar file. This file will be used to create the Docker image as mentioned above.

Run the mvn clean install command to make sure that it's generated.

Let's build the image using this Dockerfile. To do so, move to the root directory of the application and run this command:

We built the image using docker build. We gave it a name with the -t flag and specified the current directory where the Dockerfile is. The image is built and stored in our local docker registry.

And finally, let's run our image:

We can run Docker images using the docker run command.

We know that each container is an isolated environment in itself and we have to map the port of the host operating system - 8090 and the port inside the container - 8080, which is specified as the -p 8090:8080 argument.

Our Spring Boot application is successfully running within a Docker container!

In the previous section we wrote a simple Dockerfile and build our application using the native docker build command. However, there are a couple of issues that we may encounter in our projects using this method:

There are many Maven plugins available that we can use in our pom.xml file that would make our life much easier. The way that this Maven plugin works is that it internally creates the Dockerfile based on the configuration in the pom.xml file and then uses the generated Dockerfile to build the image.

Using this method, there's no need for us to manually update the name, nor run the terminal.

We will be using the fabric8io/docker-maven-plugin.

The plugin should be located in our pom.xml file after the build tag. This will be an optional build plugin using Maven profiles. It's always a good idea to use this via profiles because we want the regular mvn clean install command to work on a developer's machine, which doesn't have Docker installed too:

Let's take a closer look at this:

Now check the REST endpoint (http://localhost:8090/greet/john) in the browser.

Note: You have to stop the previously running containers that are using port 8090, or else you will get an error.

You can easily check what containers are running using:

Now, if the port is already in use, you can either change the port or remove the old container using:

Another easy way is to stop all of the containers:

In this article, we covered the two most commonly used ways to containerize a Spring Boot application using Docker.

The first approach was done by using a simple Dockerfile to build the image, and the second approach is using a Maven plugin.

Once the image is created, there are many ways to run it. In this article, we relied on the native docker run command. A more approachable way is to use docker-compose if you have many images that you need to run.

For a production environment we usually go for Kubernetes or Docker-swarm so as to scale our application based on network traffic automatically.