Graphs are a convenient way to store certain types of data. The concept was "stolen" from mathematics and appropriated for the needs of computer science.

There are several ways in which we can describe what graphs are. We will approach graphs first in a highly simplified way, then through trees if the reader is familiar with the concept from earlier experience, and finally as a mathematical term.

Each graph is consisted of nodes (also called vertices) and edges. We can look at nodes as "chunks of data" and edges as "relations between those chunks of data".

If we want to point out that two chunks of data are related to each other in some way - we'd connect them with an edge. Nodes are usually represented as circles with an identifying mark on them, so that we can distinguish between nodes, and edges are represented via lines (or arrows, as we'll see later) that connect two nodes.

A form of the graph data structure is often used when making maps for a city's bus lines. You'd see a simplified map that shows which stations (nodes) the bus stops at, and the route connecting different stops is what we call an edge:

This graph shows what different bus stops we have and how they are connected. For example, we can see that, using this bus line, to get from Bus Stop A to Bus Stop C we'd have to go through Bus Stop B - we can't get there any other way.

Graphs are very versatile, and that's one of the reasons why they are so popular. Let's say we wanted to add information regarding how long it took on average (in minutes) to get from one bus stop to another. We'd add "weights" to our edges:

Now our graph shows even more information than before, we see how long it takes to get from one stop to another. We can deduce that getting from Bus Stop A to Bus Stop C would take 23 minutes since we'd need to "traverse" the edge connecting Bus Stop A and Bus Stop B that has a weight of 15 and the (Bus Stop B -> Bus Stop C) edge, which has a weight of 8.

The previous example introduced the concept of weighted graphs, i.e. that edges can have values attached to them if we so require.

Now we'll look at another graph concept - directed and undirected graphs. Let's say that our bus line didn't have the same stops in both directions.

More precisely, when our bus starts from Bus Stop A it goes through B, C, and ends at D; however, in the other direction it doesn't go through C but an altogether different bus stop E, before then going through B. We might make something like this:

As the spoiler in the picture suggests - this approach isn't correct. Just looking at this graph we can't understand which bus stops the bus goes through in which direction, since nothing's stopping us from getting from B to E even though we should only be able to get from E to B.

Now, the cycle is no longer ambiguous:

Now it's clear that we can't go from B to E or from D to C, etc. It's clear that we can make graphs as simple or as complex as we want to. We could go one step further in our example, if for some reason it took a different amount of time to travel between some bus stops depending on the direction we're going.

Here are a few examples of data that can be conveniently stored/represented using graphs: 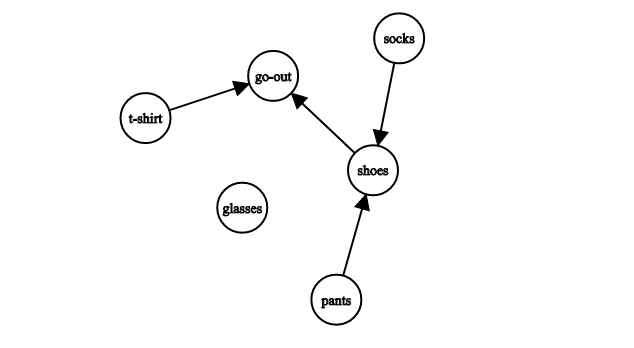 Here we can see that we can put on glasses, socks, pants and a t-shirt regardless of other clothes. But we can't put on shoes before putting on pants and socks. And we can't go-out before doing everything else, except putting on glasses, since they might not be necessary. These types of graphs are easily sorted and we can see a feasible order of task execution using Topological Sorting.

Note: A frequent misconception is that graphs need to be connected, or at least that every node needs to be connected to another in some way. This isn't true, and we've demonstrated that in the previous example. A graph can just as easily be consisted of any number of nodes without a single edge between them.

If you are familiar with trees, graphs are easy to understand - trees are a special kind of graph, i.e. graphs with certain restrictions. Every tree is a graph, but not every graph is a tree.

By definition, trees are undirected graphs that:

Or in very simplified terms - trees are connected graphs without cycles. For graphs, we just get rid of all these restrictions and keep the nodes and edges concept.

Graphs as a Mathematical Term

All of the above originated from the mathematical term of a graph. A graph is an ordered pair G = (V, E), where V is a set of vertices and E is the set of edges.

Undirected Graphs: In the case of undirected graph, E has the following definition E ⊆ {{x, y} | (x, y) ∈ V^2}. Sometimes an extra condition is added if we want to avoid edges that have the same start and end point (i.e. x ≠ y).

This all leads us to several important topics when it comes to graph traversal in Java - Representing Graphs in Code, Breadth-First Search, Depth-First Search, and Dijkstra's Algorithm.

Knowing what graphs are, we need a way to represent them in code. This is usually done via Adjacency Lists and Adjacency Matrices. In the following article we present an in-depth look at these implementations in Java:

Breadth First Search (BFS) is a graph-traversal algorithm, often used for finding the shortest path from a starting node to a goal node.

BFS visits "layer-by-layer". This means that it first visits all the children of the starting (root) node. These children are considered as the "second layer", after which their children are visited in the same manner.

Dijkstra's Algorithm is a very well-known graph traversal algorithm for finding the shortest path from a given node/vertex to another.

There are several implementations of this algorithm and some even use different data structures and have different applications.

Dijkstra works in a different fashion to the previous algorithms. Instead of starting at the root node, it starts at the goal node and backtracks its way to the starting node.

A question that most likely came to mind when you were reading about DFS and BFS was:

Let's go through some examples:

Graphs are a convenient way to store certain types of data. Each graph is consisted of nodes (also called vertices) and edges. We can look at nodes as "chunks of data" and edges as "relations between those chunks of data".

Graph traversal algorithms such as BFS, DFS, Dijkstra's Algorithm and A* are very commonly used in many branches of data science and machine learning.