A positional numeral system is, in simple terms, a number writing system, where the weight (or the value) of a digit is determined by its position. For example, in the number 123, 1 has more value than 3 because it's in position that denotes hundreds, and the 2 is in the tens.

Radix Sort can be used to lexicographically sort many types of data - integers, words, emails, but is mainly used to sort collections of integers and strings (that are mapped to appropriate integer keys).

It's a non-comparative sorting algorithm, meaning that it doesn't sort a collection by comparing its individual elements, but rather uses the inherent nature of the data its sorting to sort faster - it sorts data based on their radix.

Comparative sorting algorithms have the best case time complexity of O(nlogn), which is comparatively worse to linear execution time (O(n+k)) of non-comparative algorithms.

For example, let n be the number of elements to be sorted, and k is the range of allowed element values.

Counting Sort has the potential to be significantly faster than other popular comparative algorithms, though, only if a certain condition was fulfilled.

The idea of the Radix Sort is to upgrade Counting Sort so that it maintains the linear time complexity even if the range of elements' values drastically exceeds the number of elements.

In fact, Radix Sort inherently uses Counting Sort as the main subroutine, with a few tweaks to overcome the issues that arise with an incrased range of elements' values.

In order to get a grasp of Radix Sort, we'll have to delve into Counting Sort first, implement it and observe the downfall with an increased number of element values.

Why Use Counting Sort in the Radix Sort?

Counting sort is a stable, non-comparative sorting algorithm, and it is mainly used to sort integer arrays. All of these characteristics are important for its use in Radix Sort. You can use other algorithms as the subroutine, as long as they have these characteristics, though, Counting Sort is the most natural matchup.

Radix Sort needs to maintain a relative order of elements with the same key values in the input array while sorting the same place value digits, therefore, our main subroutine by definition needs to be some sort of stable sorting algorithm: 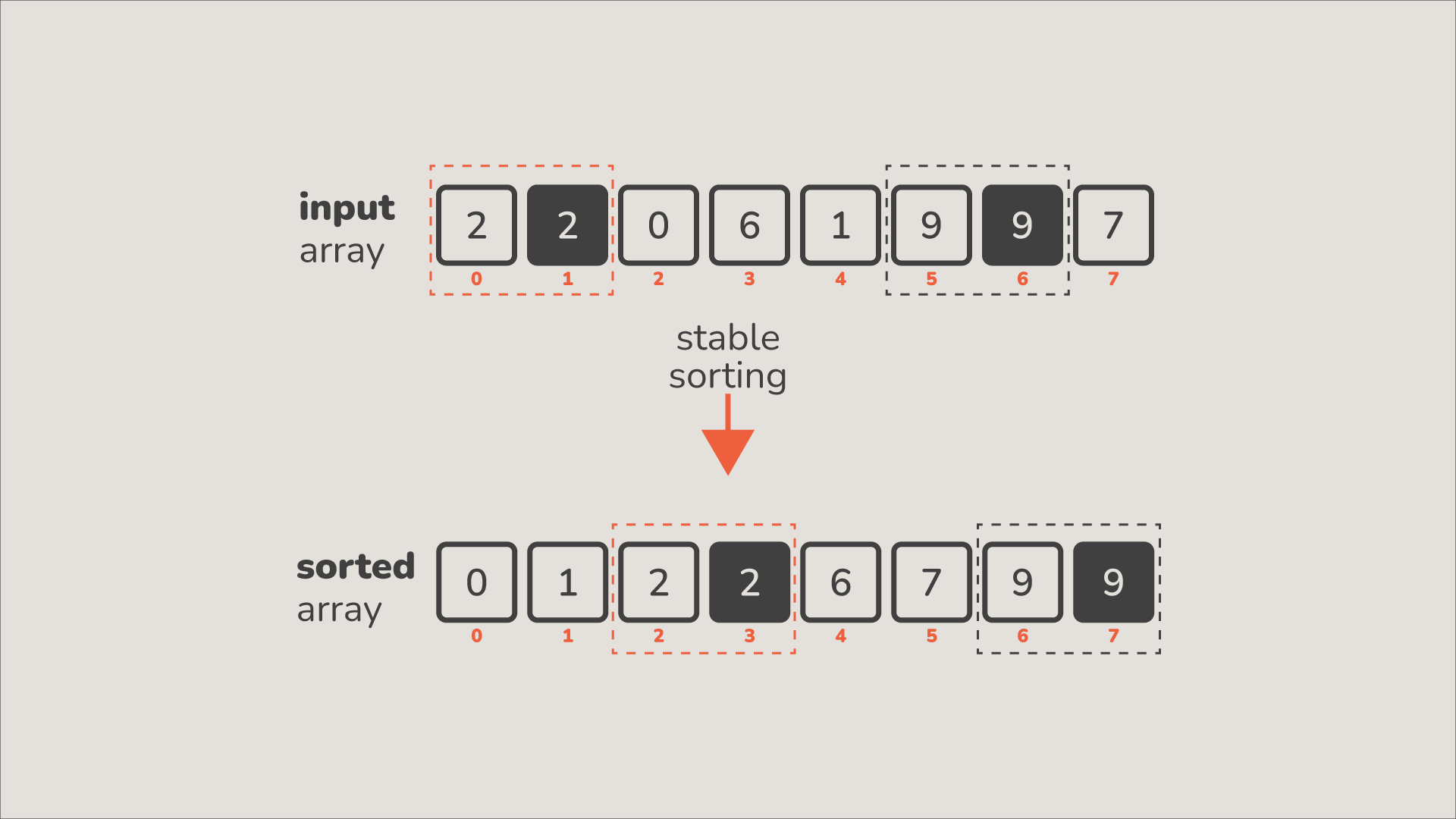 Non-comparative sorting algorithms generally have linear complexity, so they will have less impact on the complexity of the Radix Sort.

How Does the Counting Sort Work?

Counting Sort works by counting the number of elements, that fit a distinct key value, and then calculates the positions of each key.

First of all, we'll find the maximum element in the input array - max = 9.

Then, we'll create an auxiliary array with max+1 elements. This is the count array (C), which will be used to store the number of occurrences of each element in the input array.

Initially, all counts are initialized to 0:

Now, we need to go through the following steps:

1. Traverse the input array and increase the corresponding count for every element by 1

After this step, the count array will store the number of occurrences of each element in the input array:

2. For each element in the count array, sum up its value with the value of all its previous elements, and then store that value as the value of the current element:

This way, we are storing the cumulative sum of the elements of the count array, on each step.

3. Calculate element position based on the count array values

To store this sorted sequence, we'll need to create a new array. Let's call it the output array (O), and initialize it with k zeros, where k is the number of elements in the input array:

For each element I[i] (starting from the end) in the input array: 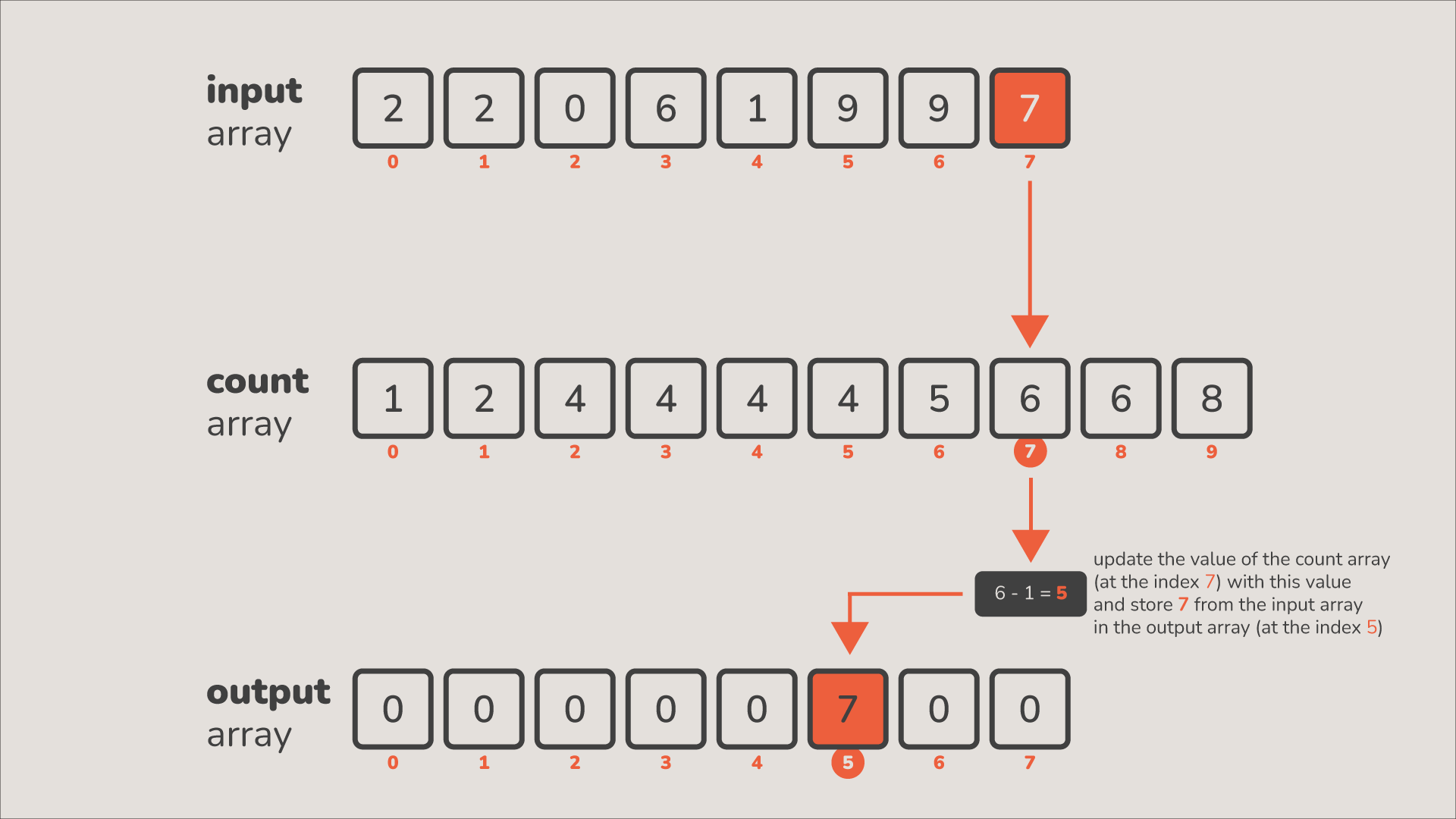 In the end, the output array contains the sorted elements of the input array!

Now, with all that out of the way - let's go ahead an implement Counting Sort in Python:

Running the code above will yield us the following output:

The time complexity of the counting sort is O(n+k), where n is the number of elements in the input array, and k is the value of the max element in the array.

The problem occurs when the value of the largest element drastically exceeds the number of elements in the array. As the k approaches n², the time complexity gets closer to O(n²), which is a horrible time complexity for a sorting algorithm.

This is where Radix Sort kicks in. 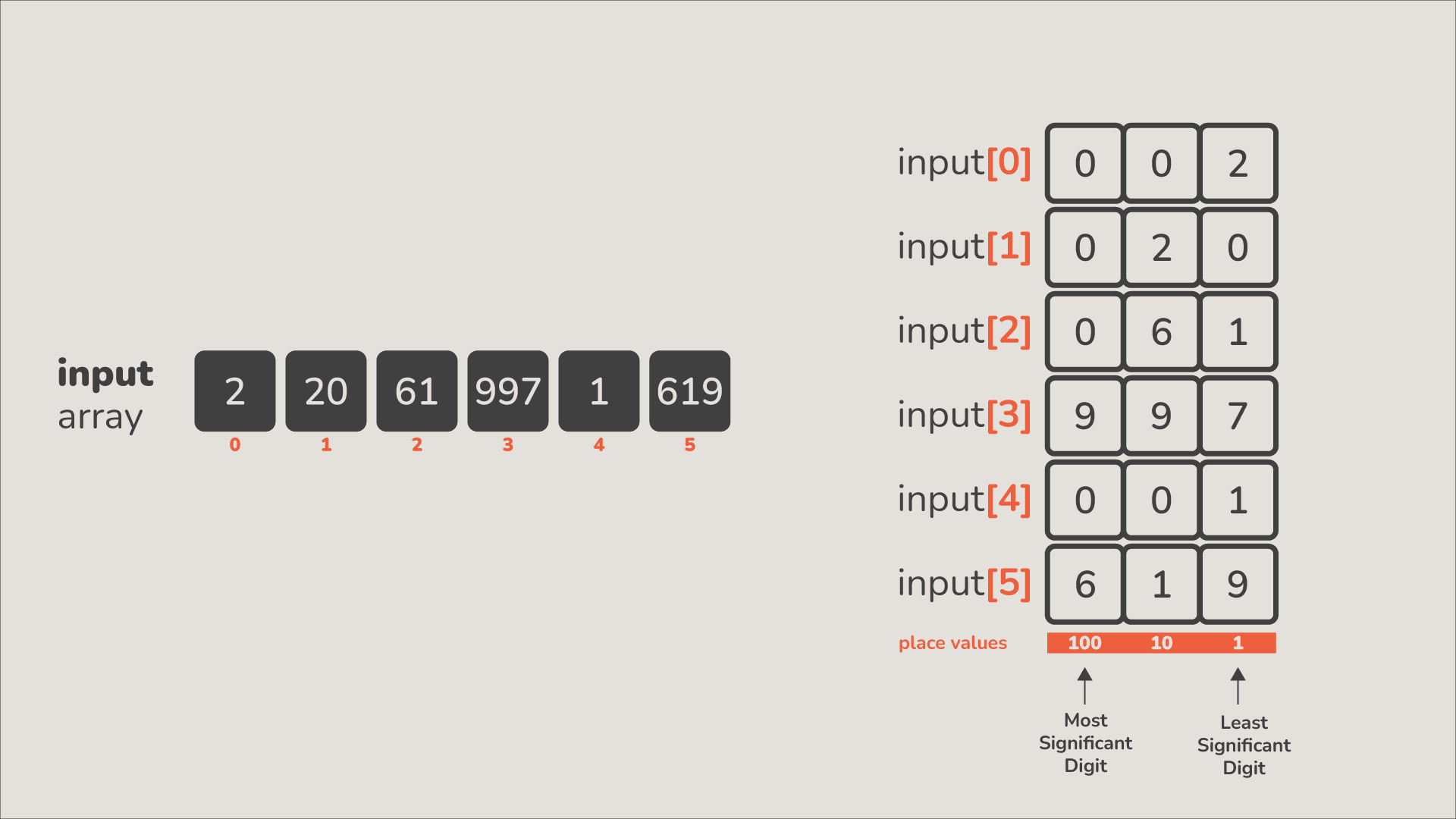 The steps taken by Radix Sort are fairly straighforward: 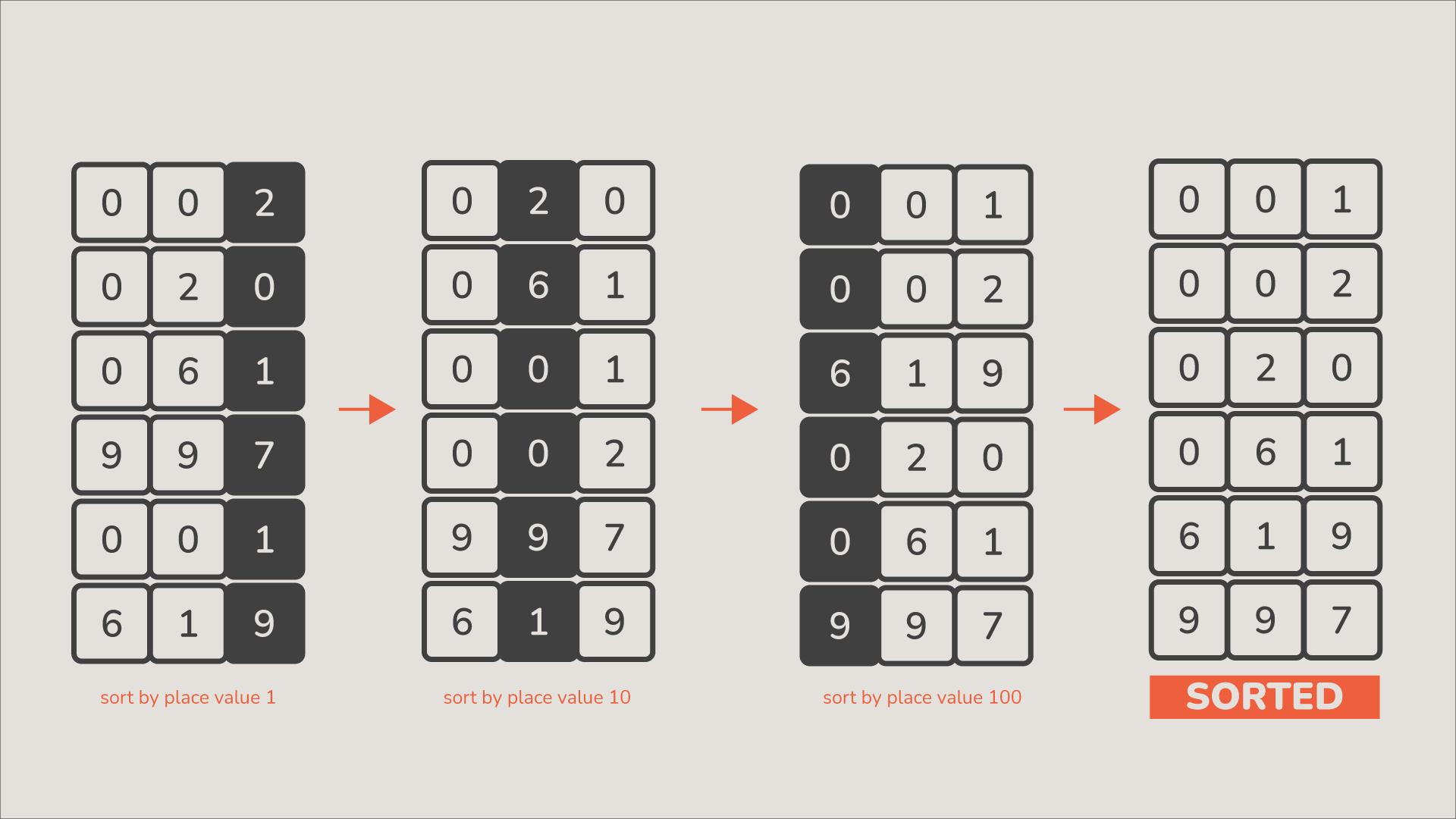 And finally, with that out of the way, let's implement Radix Sort in Python:

Running the code above will yield us the following output:

That is the main reason why the radix sort is not as widely used as some other types of sorting algorithms, even if it has linear time complexity.