TensorFlow: Save and Restore Models

Training a deep neural network model could take quite some time, depending on the complexity of your model, the amount of data you have, the hardware you're running your models on, etc. On most of the occasions you'll need to save your progress to a file, so in case of interruption (or a bug), you'll be able to continue where you left off.

Even more, after a successful training you'll surely need to re-use the model's learned parameters to make predictions on new data. This is the case for any deep learning platform, as for TensorFlow.

In this post we look at saving and restoring a TensorFlow model, which we describe some of the most useful options on the way, and provide some examples.

Quick Introduction of the TensorFlow Model

TensorFlow's main functionality is delivered through tensors - its basic data structure similar to multi-dimensional arrays in NumPy, and graphs - representing the computations on data. It's a symbolic library, meaning that defining a graph and tensors would only create a model, while tensors obtain concrete values and operations get executed within a session - a mechanism for executing the modeled operations in a graph. Any concrete values of the tensors are lost when a session is closed, which is another reason to save your models to a file after a session is run.

It's always easier to understand through examples, so let's create a simple TensorFlow model for linear regression of two-dimensional data.

Next step is to create the model. We'll generate a model that will estimate the horizontal and vertical shift of a quadratic function in the form:

where h and v are the horizontal and vertical shifts.

The following lines generate the model (see comments in the code for more details):

At this point we have the model which needs to be run in a Session, passing to it some real data. Let's generate some example quadratic data and add noise to it. 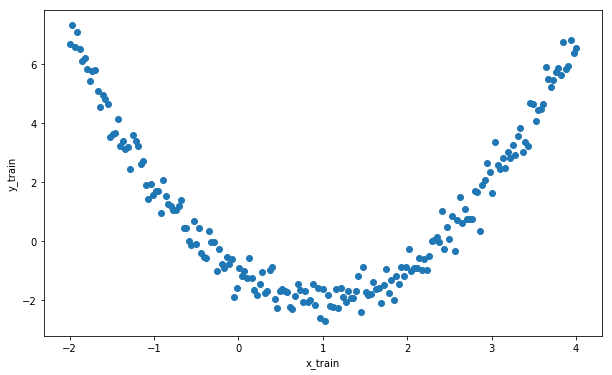 The Saver class provided by the TensorFlow library is the recommended way for saving the graph's structure and variables.

In the following few lines, we define a Saver object and within the train_graph() method we go through 100 iterations to minimize the cost function. The model is then saved to disk in each iteration, as well as after the optimization is finished. Each saving creates binary files on disk called "checkpoints".

Now let's train the model with the above function and print out the learned parameters.

Okay, the parameters were pretty accurately estimated. If we check our filesystem, there are files saved for the last 4 iterations, as well as the final model.

When saving the model, you'll notice that it takes 4 types of files to save it: 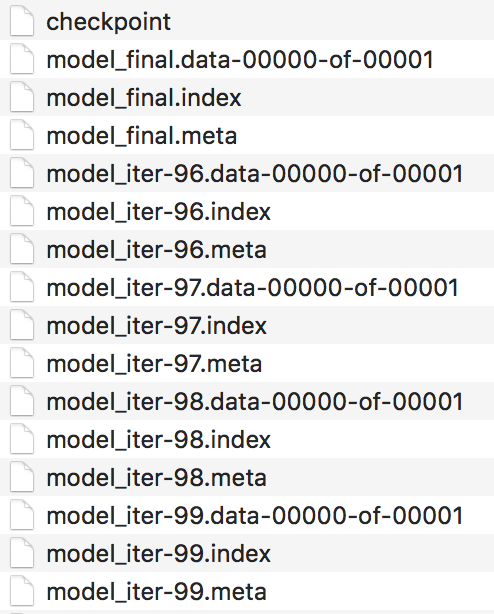 Calling the tf.train.Saver() method, as shown above, would save all variables to a file. Saving a subset of your variables is possible by passing them as an argument through a list or a dict, for example: tf.train.Saver({'hor_estimate': h_est}).

A few other useful arguments of the Saver constructor, which enable control of the whole process, are:

For more information, check out the official documentation for the Saver class, which offers other useful argumets you can explore.

The first thing to do when restoring a TensorFlow model is to load the graph structure from the ".meta" file into the current graph.

The current graph could be explored using the following command tf.get_default_graph(). Now, the second step is to load the values of variables.

A reminder: values only exist within a session.

As mentioned earlier, this approach saves only the graph structure and the variables, which means the training data that's input through our placeholders 'X' and 'Y' is not saved.

Anyway, for this example we'll use our training data defined out of tf, and visualize the model fit. 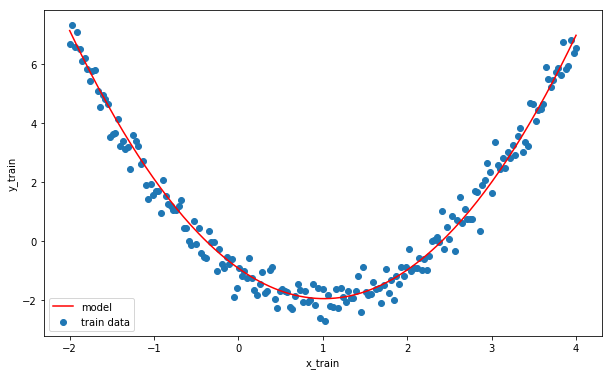 As a bottom line for this part, the Saver class allows an easy way to save and restore your TensorFlow model (graph and variables) to/from a file, and keep multiple checkpoints of your work which could be useful to try your model on new data, continue training it, and further fine-tuning.

One new approach to saving and restoring a model in TensorFlow is to use the SavedModel, builder, and loader functionality. This actually wraps the Saver class in order to provide a higher-level serialization, which is more suitable for production purposes.

While the SavedModel approach seems to not be entirely accepted by developers yet, its creators point out that it's clearly the future. Compared to the Saver class, which focuses mainly on variables, SavedModel tries to encompass many useful features into one package, such as Signatures, which allow saving of graphs that have a set of inputs and outputs, and Assets containing external files used in initialization.

The saving of a model is done using the SavedModelBuilder class. In our example we don't use any signatures or assets, but it's enough to illustrate the process.

Running this code you'll notice that our model is saved to the file located at "./SavedModel/saved_model.pb".

The model restoring is done using the tf.saved_model.loader and restores the saved variables, signatures, and assets in the scope of a session.

In the following example, we'll load the model and print out the values of our two coefficients h_est and v_est.

And again, as expected, our model was successfully restored with the correct trained parameters.

Saving and restoring a TensorFlow model is a very useful feature, knowing that training of deep networks can take a long time. The subject is too broad to be covered in details in a single blog post, so we may revisit it in a future post.

Anyway, in this post we introduced two tools: the basic Saver class which saves the model in a form of checkpoints, and the SavedModel builder/loader which builds on top of Saver and creates a file structure which is easy to use in production. A simple linear regression was used to illustrate the examples.