Unit Testing in Java with JUnit 5

JUnit is a popular testing framework for Java. Simple use is very straightforward and JUnit 5 brought some differences and conveniences compared to JUnit 4.

Installing JUnit is as simple as including the dependencies:

You can choose to simply create the testing classes in the same folder as the rest of your code, but it's recommended to have a separate directory for tests. Another thing to note is the naming conventions. If we wish to fully test our code, each class should have a corresponding test class named - [classname]Test.

Generally, a recommended project structure is: 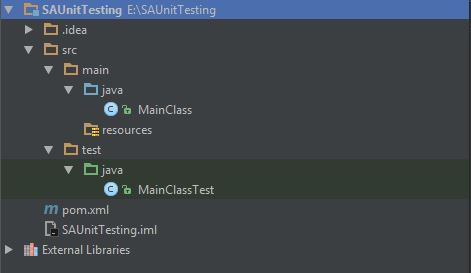 Note: It's highly recommended that you import JUnit5 using the static modifier, it will make using the methods provided a lot cleaner and more readable.

Differences Between JUnit 4 and JUnit 5

One of the main ideas behind the new JUnit version is utilizing the features Java 8 brought to the table (mainly lambdas) to make everybody's life easier. Some minor things have been changed - the optional message that an assertion would be printed if it failed is now the last, "optional" argument, instead of inconveniently being the first.

JUnit 5 consists of three projects (JUnit Platform, JUnit Jupiter, and JUnit Vintage) so there'll be several different imports - although, JUnit Jupiter will be our main focus.

Some other differences include:

It doesn't do anything special but it will let us go through the motions of testing. As per the naming conventions, the CalculatorTest class is born:

The @Test annotation tells the JVM that the following method is a test. This annotation is necessary before every testing method.

The method assertEquals() and all "assertion" methods work similarly - they assert (i.e. make sure) that whatever we're checking is true. In this case we're asserting that the two arguments we passed are equal (see the Note below), in case they aren't - the test will fail.

The first argument is generally the expected return value and the second is the actual return value of the method we're testing. If these two are equal, the assertion is pleased and the test passes.

The third argument is optional but highly recommended - it's the custom message that'll appear when a test doesn't go as it should. It might not matter with small programs but it's good practice to add these messages so whoever works with your code later (or a future you) can easily figure out what didn't work.

We run the tests by simply running the CalculatorTest class (we can do that even though it doesn't have a main method):

If we changed the assertEquals() line to something that wasn't correct, like:

Note: It's very important to understand that assertEquals() actually uses the .equals() method and not the == operator. There's a separate JUnit method called assertSame() that uses == instead of .equals().

JUnit 5 comes with many assertion methods. Some of them are just convenience methods that can be easily replaced by an assertEquals() or assertSame() method. However, it's recommended to use these convenience methods instead, for readability and ease of maintenance.

Let's take a look at the assertions at our disposal. They're generally pretty self-explanatory:

Note: You may have noticed that the String optionalMsg is excluded from the method declarations. JUnit 5 provides a small optimization to the optionalMsg. We can, of course, use a simple String as our optionalMsg - however, regardless of how the test goes (whether it fails or not) Java will still generate that String, even though it might never get printed out. This doesn't matter when we do something like:

But if we had something along the lines of:

You really don't want something like that optionalMsg loading regardless of whether Java plans to print it out.

The solution is to use a Supplier<String>. This way we get to utilize the benefits of lazy evaluation, if you've never heard of the concept, it's basically Java saying "I will not calculate anything I don't need to. Do I need this String right now? No? Then I won't create it.". Lazy evaluation shows up several times in Java.

This can be done by simply adding () -> before our optional message. So that it becomes:

This is one of the things that weren't possible before JUnit 5, because Lambdas weren't introduced to Java at the time and JUnit couldn't leverage their usefulness.

In this part we'll introduce some other annotations, besides the necessary @Test annotation. One thing we should understand is that for each test method, Java creates a new instance of the testing class.

It's a bad idea to declare global variables that are changed within different test methods, and it's an especially bad idea to expect any type of testing order, there are no guarantees in which order the test methods will be run!

Another bad idea is to have to constantly initialize the class we want to test if we don't have to. We'll see how to avoid that soon, but before that, let's take a look at the available annotations:

To illustrate when each of these methods is executed, we'll add some flavor to our CalculatorTest class, and while we're at it demonstrate the use of the assertThrows() method:

Which gives us the output of:

This also shows us that, despite the additionTest() method being declared first, it doesn't guarantee that it will be executed first.

Prior to JUnit 5, the testing methods could not have any parameters, but now they can. We'll use them while demonstrating the new annotations.

A simple and useful annotation that simply disables any test method, i.e. the test will not be run and the testing output will show that the particular test was disabled:

Gives the following output for that testing method:

Another simple annotation that changes the displayed name of the testing method.

The @Tag annotation is useful when we want to create a "test pack" with selected tests. Tags are used to filter which tests are executed:

So if we wanted to run only tests that have the "a" tag, we'd go to Run -> Edit Configurations, and change the following two fields before running the test: 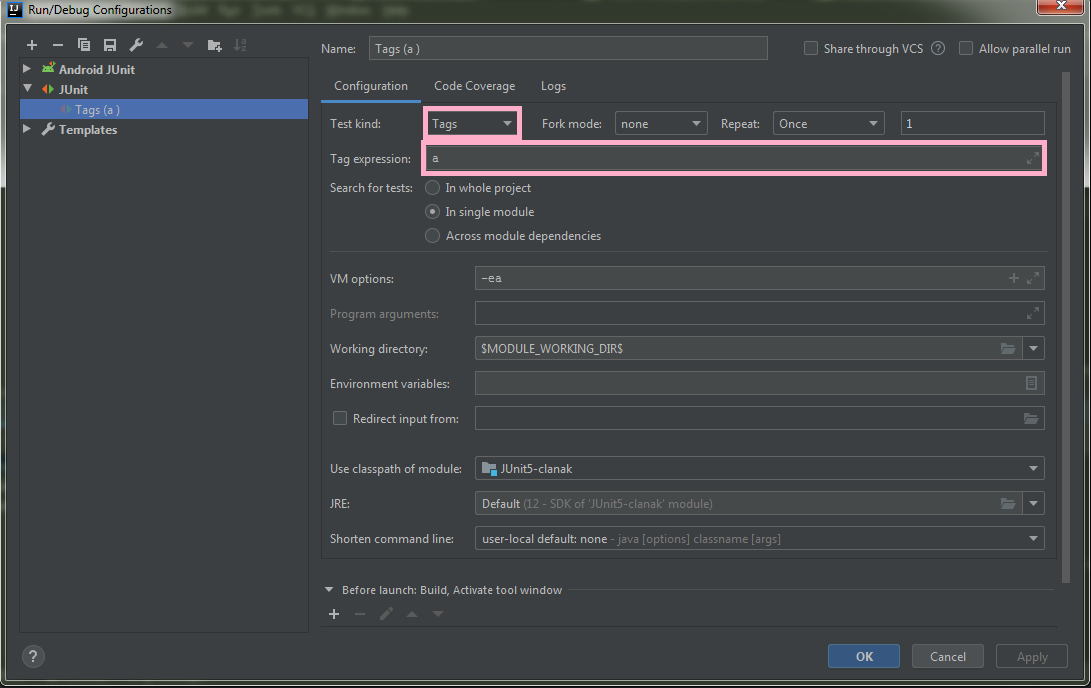 This annotation works the same as the @Test annotation but runs the testing method the specified number of times. Each test iteration can have it's own name, by using a combination of dynamic placeholders and static text. Currently available placeholders are:

The default name of each iteration is "repetition {currentRepetition} of {totalRepetitions}".

The RepetitionInfo parameter isn't necessary, but we can access it if we need that data. We get a clean display regarding each iteration when we run this: 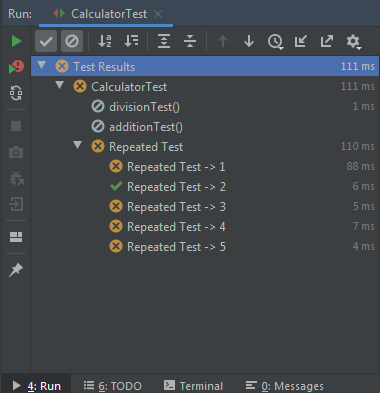 Parameterized tests make it possible to run a test multiple times as well, but with different arguments.

It works similarly to @RepeatedTest so we won't go through everything again, just the differences.

You have to add at least one source that will provide the arguments for each iteration and then add a parameter of the required type to the method.

The method will receive the array elements one by one: 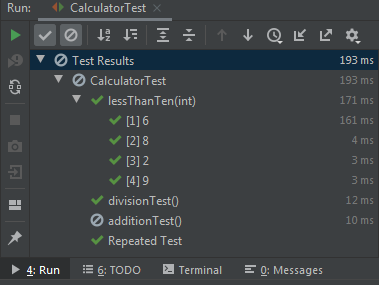 @ValueSource is just one type of annotation that goes with @ParametrizedTest. For a list of other possibilities, check the documentation.

This annotation lets us group tests where it makes sense to do so. We might want to separate tests that deal with addition from tests that deal with division, multiplication, etc; and it provides us with an easy way to @Disable certain groups entirely. It also lets us try and make full English sentences as our test output, making it extremely readable.

Most of the things we can do with @TestInstance(Lifecycle.PER_CLASS) can be done with static variables. We have to be careful to reset all the variables that needed reset to a certain value in @BeforeEach, which were usually reset by the class being re-initialized every time.

Besides the aforementioned assertions, we have assumptions. When an assumption isn't true, the test isn't executed at all. Assumptions are typically used when it doesn't make sense to continue executing a test if certain conditions aren't met, and most often the property being tested is something external, not directly related to what we're testing. There are a few overloaded assumption methods:

A BooleanSupplier can be used instead of a regular boolean.

Which would give us the output:

Most of us test code by manually running the code, entering some input or clicking some buttons and checking the output. These "tests" are usually one common case scenario and a bunch of edge cases that we can think of. This is relatively fine with small projects but it becomes completely wasteful on anything bigger. Testing a particular method is particularly bad - we either System.out.println() the output and check it, or run it through some if statements to see whether it fits the expectation, then we change the code whenever we want to check what happens when we pass other arguments to the method. We visually, manually scan for anything unusual.

JUnit gives us a clean way of managing our test cases and separates the testing of the code from the code itself. It lets us keep track of everything that needs to be tested, and shows us what doesn't work in a neat way.

Generally, you want to test the common case of everything you can. Even simple, straight-forward methods, just to make sure they're working as they should. This might even be the most important part of automated testing - since whenever you change something in your code, or add a new module, you can run the tests to see whether you've broken the code or not, to see whether everything still works as it did before the "improvement". Of course, edge-cases are also important, especially for more complex methods.

Whenever you find a bug in your code, it's a very good idea to write a test for it before fixing the issue. This will make sure that if the bug occurs again, you won't need to spend time figuring out what went wrong again. A test will simply fail and you'll know where the issue is.

About Olivera Popović
Website
Hey guys, I want to point out that I don't have any social media to avoid mistakes. If you need any help - post it in the comments :)