In this guide, we'll take a look at two of Python's most popular data structures - Dictionaries and Arrays. Each of these provide a specific way of arranging your data, with pros and cons for certain tasks, and knowing when to use which will allow you to leverage the built-in functionalities.

Note: This guide assumes Python 3.x, and most of it is oriented at versions after that. We will, however, also note some key differences for Python 2.x.

An Array is one of the fundamental data structures in computer science - a sequence of 0..n elements, where each element has an index.

Most arrays have a fixed size, so they take a chunk of memory every time a new one is created:

Here, we've got a simple array consisting of 7 elements. Indexing typically starts at 0, and each element has a positional index that we can use to access it. This makes the array's access time complexity a O(1).

Most of Python's arrays are dynamically typed, which means that the objects of an array have a type, but the array itself is not restricted to only one type - you can have an array consisting of an integer, a string and an object, or even of another array that's heterogenously mixed as well.

There are 6 important types of arrays in Python: list, tuple, str, bytes, bytearray and array.array.

When talking about each of them, there are a few key properties we'll take into account:

A list in Python is dynamic (non-fixed size), dynamically typed (elements not restricted to a single type) and mutable (elements can be changed in-place).

In Python, a list is defined by declaring its elements within squared brackets []. Let's go ahead and define a list:

It contains a few integers and a few strings, denoting names. Since lists are dynamically typed, this is allowed:

Since lists are dynamic, we can change the number of elements by adding a new one, for example:

This results in our list having 8 elements, instead of the 6 we've defined in the beginning:

Now, let's try replacing an element and adding a new one. We'll check the ID of the list (reference in memory) to confirm that it's not switched out under the hood with a new copy that contains either added elements or replaced ones:

Note: Python's lists can even store functions in a sequence:

Which will result in:

Our output consists of functions at the given addresses. Now let's try and access a function and run it:

Since the first element of this list is f1(), we'd expect its appropriate print() statement to run:

Lists are the most commonly used type of arrays in Python. They are easy to use and intuitive. Additionally, their time complexity for accessing elements is O(1).

A tuple in Python is non-dynamic (fixed size), dynamically typed (elements not restricted to a single type) and immutable (elements cannot be changed in-place).

In addition to that, we use regular brackets () when defining them:

Since tuples are dynamically typed, we can have elements of different types present within them:

Since tuples are non-dynamic, they have a fixed size, and we can't append() elements to them in-place, since this changes their size. Thus, tuples don't have an append() method.

We can, however, create a new tuple consisting of smaller tuples, which again is of fixed size:

We've assigned the same variable reference to a new object created to contain both of these tuples together - even though the reference variable is the same, it points to a totally different object in memory:

The time complexity for accessing items in a tuple is also O(1).

In Python 3, the str type (short for String) is overhauled from Python 2. In Python 2, it used to represent both text and bytes, but since Python 3 - these two are totally different data types.

A string in Python is non-dynamic (fixed size), statically typed (elements restricted to a single type) and immutable (elements cannot be changed in-place).

A sequence of bytes (in human-readable characters), enclosed within parentheses "" is used to define a string:

We can access elements via standard array indexing, but can't change them:

In fact - strings are recursive. When we declare a string using characters - a string for each character is formed, which is then added to a list of strings that constitute another string.

myStr has the length of 5, and is made up of five individual strings, of length 1:

Both our 'character' and string are of the same class - str.

Similar to tuples, we can concatenate strings - which results in a new string consisting of the two smaller ones:

And the result is:

Again, strings only support characters and we cannot mix in other types:

Which will result in:

However, int, as well as every other type can be casted (converted) into a string representation:

With this method you can get away with printing, for example, ints and strings in the same line:

A bytes object consists of multiple single bytes or integers, ranging from 0 to 255 (8-bit).

Defining a bytes object is slightly different from other arrays since we explicitly have to cast a tuple into bytes:

If the tuple contains elements of different types, a TypeError is thrown:

When working with str's, an array of bytes must be encoded with a charset, otherwise it'll be ambiguous as to what they represent:

If you're unfamiliar with how encoding bytes works - read our guide on How to Convert Bytes to String in Python.

Furthermore, a bytes array of integers can be mutable when casted to another array type called the bytearray.

A Bytearray in Python is dynamic (non-fixed size), statically typed (elements restricted to a single type) and mutable (elements can be changed in-place).

Now, we can try to add elements to this array, as well as change an element:

A bytearray can be casted back to a bytes array; though, keep in mind that it's an expensive operation which takes O(n) time.

So far, we've been working with built-in types. However, another type of array exists, in the array module.

This array is dynamic (non-fixed size), statically typed (elements restricted to a single type) and mutable (can be changed in-place). We need to explicitly note the type we'll be using in an array and these types are C-style types: 32-bit integers, floating point numbers, doubles, etc.

Each of these have a marker - i for integers, f for floats and d for doubles. Let's make an integer array via the array module:

Some of the more used C-like types: 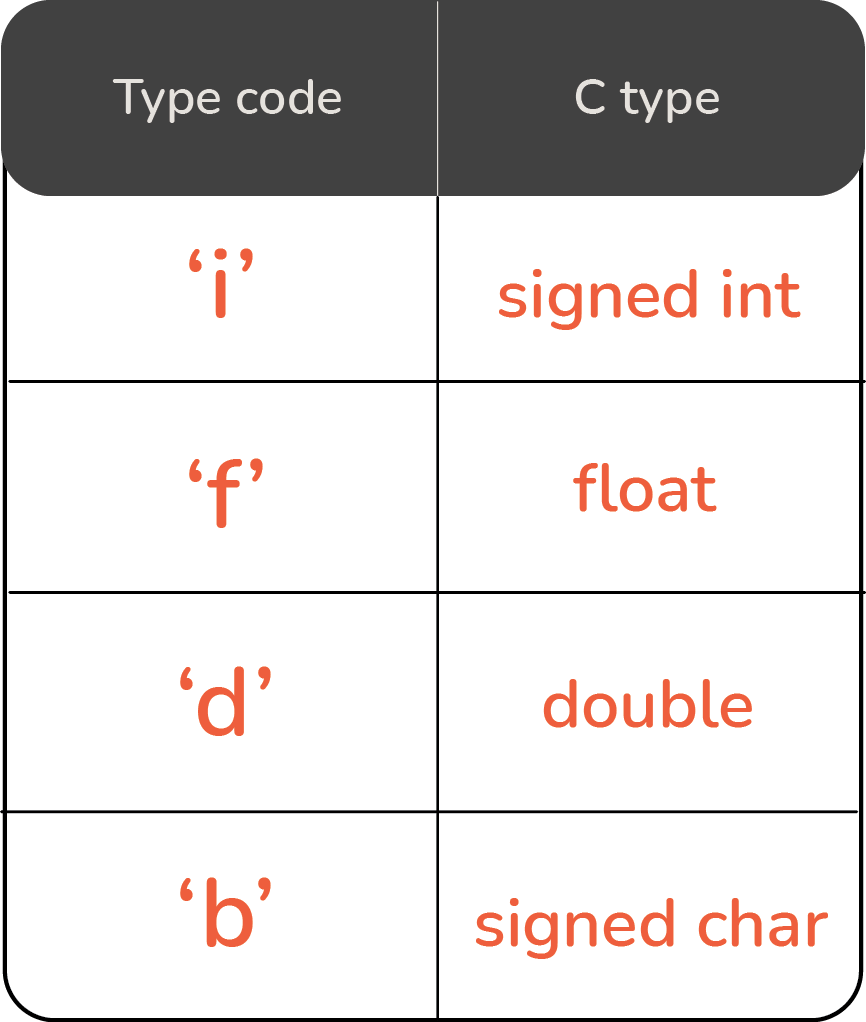 The Dictionary is a central data structure in Python. It stores data in key-value pairs.

Due to this, it can also be called a map, hash map or a lookup table.

There is a few different variants of a dictionary:

Dictionaries rely on hash values, that identify keys for the lookup operation. A hashtable contains many hash values which never change during the lifetime of a hashtable.

Every object has a hash value, and the hash() method can be used to retrieve it. This value isn't constant and is calculated at runtime, though if a == b, hash(a) will always be equal to hash(b):

This code will result in something along the lines of:

Note: Numeric values that are equal have the same hash value, regardless of their type:

This mechanism is what makes dictionaries blazingly fast in Python - unique identifiers for each element, giving them a lookup time of O(1).

The contents of a dictionary (dict type) are defined within curly braces {}. The syntax resembles JSON, given the key-value pairs:

A dictionary can have an arbitrary number of pairs and keys should be hashable without any duplicate keys (duplicate keys will result in the same hash). In such cases, the first key will be rejected and the dictionary will only actually contain the second key.

Since dictionaries are mutable, we can add a new key-value pair just by 'accessing' a non-existant key and setting its value:

Python's core dict will probably solve most of your problems, but if not, there are a few of dictionary types that can be imported from a library called collections.

A problem that you can encounter when using a dict is trying to access the value of a key that doesn't exist.

For example, in our previous demonstration if we accessed print(myDict["zip_code"]), we would get a KeyError: zip_code as zip_code doesn't exist.

This is when defaultdict comes to play, as it requests a default_factory - a function which returns the default value if a key is not present. This way, a defaultdict can never raise a KeyError:

This, as expected, results in:

Defining defaultdict values is different from the core dict class because every key-value pair must be defined 'manually' which is more tedious than the JSON-like syntax.

This type of dictionary allows us to connect multiple dictionaries into one - to chain them. When accessing data, it will look for a key one by one until it finds the first correct one:

This results in a ChainMap:

Note: We can define duplicate keys. 'name' is present in both dictionaries. Though, when we try to access the 'name' key:

It finds the first matching key:

Also keep in mind that these can still raise a KeyError, since we are now working with a core dict.

Note: As of Python 3.6, dictionaries are insertion-ordered by default.

If this isn't an important thing - you can comfortably use a dictionary. If this is important, though, such as when dealing with dates, you'll want to use an OrderedDict instead:

Now that we got in the hang of things, we should cover all the methods that these two types have implemented in them. There is four basic operations that could be done to data: access (get), update, add, delete.

Let's define an array and dictionary that we'll be experimenting on:

Dictionary: There are multiple ways to access data in a dictionary:

Array: There is only one way to get data from an array:

Dictionary: There are 2 ways to update data in a dictionary:

Array: If an array is mutable, it can be changed in a similar fashion as getting data:

Dictionary: There are 2 ways to add data to a dictionary:

Array: There are a couple of ways to add data to an array (though, an array must be mutable):

Dictionary: There are multiple ways to delete data from a dictionary:

Array: There are a few ways to delete data from an array: