Introduction to PyTorch for Classification

PyTorch and TensorFlow libraries are two of the most commonly used Python libraries for deep learning. PyTorch is developed by Facebook, while TensorFlow is a Google project. In this article, you will see how the PyTorch library can be used to solve classification problems.

In this article, given certain characteristics of a bank customer, we will predict whether or not the customer is likely to leave the bank after 6 months. The phenomena where a customer leaves an organization is also called customer churn. Therefore, our task is to predict customer churn based on various customer characteristics.

Before you proceed, it is assumed that you have intermediate level proficiency with the Python programming language and you have installed the PyTorch library. Also, know-how of basic machine learning concepts may help. If you have not installed PyTorch, you can do so with the following pip command:

The dataset that we are going to use in this article is freely available at this Kaggle link. Let's import the required libraries, and the dataset into our Python application:

We can use the read_csv() method of the pandas library to import the CSV file that contains our dataset.

Let's print the shape of our dataset:

The output shows that the dataset has 10 thousand records and 14 columns.

We can use the head() method of the pandas dataframe to print the first five rows of our dataset.

You can see the 14 columns in our dataset. Based on the first 13 columns, our task is to predict the value for the 14th column i.e. Exited. It is important to mention that the values for the first 13 columns are recorded 6 months before the value for the Exited column was obtained since the task is to predict customer churn after 6 months from the time when the customer information is recorded.

Let's perform some exploratory data analysis on our dataset. We'll first predict the ratio of the customer who actually left the bank after 6 months and will use a pie plot to visualize.

Let's first increase the default plot size for the graphs:

The following script draws the pie plot for the Exited column. 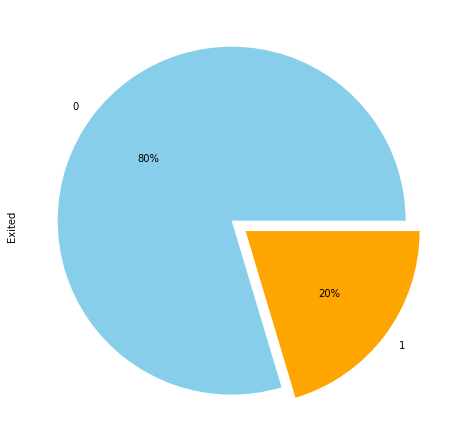 Let's plot the number of customers from all the geographical locations in the dataset: 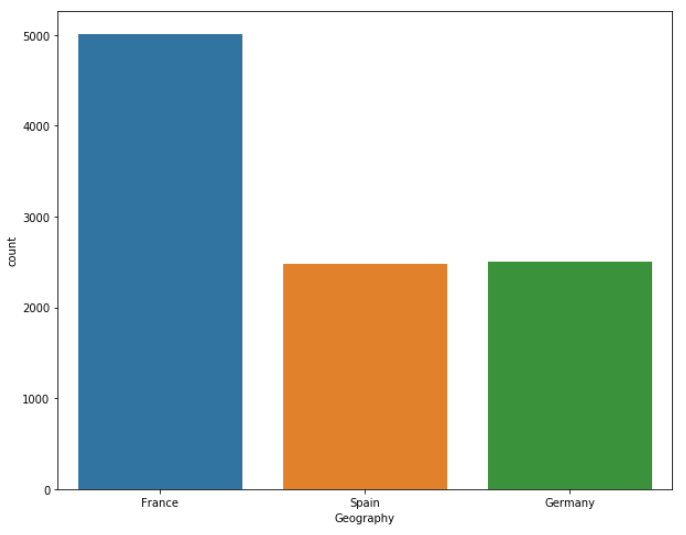 Let's now plot number of customers from each unique geographical location along with customer churn information. We can use the countplot() function from the seaborn library to do so. 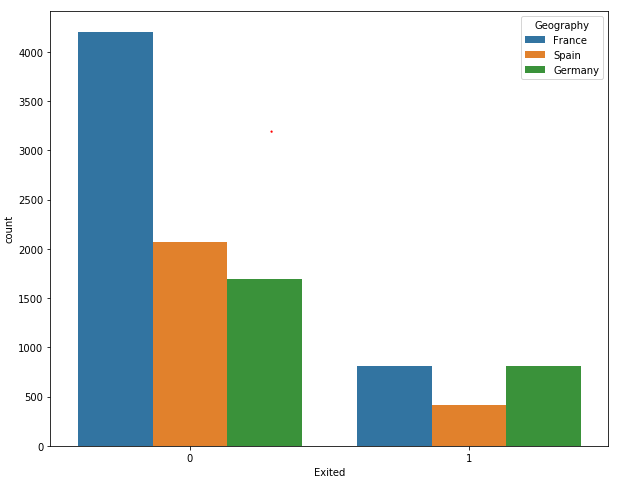 In this article, we will not visually plot the information related to the rest of the columns in our dataset, but if you want to do so, you check my article on how to perform exploratory data analysis with Python Seaborn Library.

Before we train our PyTorch model, we need to preprocess our data. If you look at the dataset, you will see that it has two types of columns: Numerical and Categorical. The numerical columns contains numerical information. CreditScore, Balance, Age, etc. Similarly, Geography and Gender are categorical columns since they contain categorical information such as the locations and genders of the customers. There are a few columns that can be treated as numeric as well as categorical. For instance, the HasCrCard column can have 1 or 0 as its values. However, the HasCrCard columns contains information about whether or not a customer has credit card. It is advised that the column that can be treated as both categorical and numerical, are treated as categorical. However, it totally depends upon the domain knowledge of the dataset.

From the columns in our dataset, we will not use the RowNumber, CustomerId, and Surname columns since the values for these columns are totally random and have no relation with the output. For instance, a customer's surname has no impact on whether or not the customer will leave the bank. Among the rest of the columns, Geography, Gender, HasCrCard, and IsActiveMember columns can be treated as categorical columns. Let's create a list of these columns:

All of the remaining columns except the Exited column can be treated as numerical columns.

Finally, the output (the values from the Exited column) are stored in the outputs variable.

We have created lists of categorical, numeric, and output columns. However, at the moment the type of the categorical columns is not categorical. You can check the type of all the columns in the dataset with the following script:

You can see that the type for Geography and Gender columns is object and the type for HasCrCard and IsActive columns is int64. We need to convert the types for categorical columns to category. We can do so using the astype() function, as shown below:

Now if you again plot the types for the columns in our dataset, you should see the following results:

Let's now see all the categories in the Geography column:

The following script plots the codes for the values in the first five rows of the Geography column:

Since we will be using PyTorch for model training, we need to convert our categorical and numerical columns to tensors.

The above script prints the first ten records from the categorical columns, stacked horizontally. The output is as follows:

Now to create a tensor from the aforementioned numpy array, you can simply pass the array to the tensor class of the torch module. Remember, for the categorical columns the data type should be torch.int64.

In the output, you can see that the numpy array of categorical data has now been converted into a tensor object.

In the same way, we can convert our numerical columns to tensors:

In the output, you can see the first five rows containing the values for the six numerical columns in our dataset.

The final step is to convert the output numpy array into a tensor object.

Let now plot the shape of our categorial data, numerical data, and the corresponding output:

The following script creates a tuple that contains the number of unique values and the dimension sizes for all the categorical columns:

A supervised deep learning model, such as the one we are developing in this article, is trained using training data and the model performance is evaluated on the test dataset. Therefore, we need to divide our dataset into training and test sets as shown in the following script:

We have 10 thousand records in our dataset, of which 80% records, i.e. 8000 records, will be used to train the model while the remaining 20% records will be used to evaluate the performance of our model. Notice, in the script above, the categorical and numerical data, as well as the outputs have been divided into the training and test sets.

Creating a Model for Prediction

We have divided the data into training and test sets, now is the time to define our model for training. To do so, we can define a class named Model, which will be used to train the model. Look at the following script:

If you have never worked with PyTorch before, the above code may look daunting, however I will try to break it down into for you.

In the first line, we declare a Model class that inherits from the Module class from PyTorch's nn module. In the constructor of the class (the __init__() method) the following parameters are passed:

Next, to find the size of the input layer, the number of categorical and numerical columns are added together and stored in the input_size variable. After that, a for loop iterates and the corresponding layers are added into the all_layers list. The layers added are:

The batch normalization of the numerical columns is applied with the following script:

Finally, the embedded categorical columns x and the numeric columns x_numerical are concatenated together and passed to the sequential layers.

To train the model, first we have to create an object of the Model class that we defined in the last section.

Let's print our model and see how it looks:

You can see that in the first linear layer the value of the in_features variable is 11 since we have 6 numerical columns and the sum of embedding dimensions for the categorical columns is 5, hence 6+5 = 11. Similarly, in the last layer, the out_features has a value of 2 since we have only 2 possible outputs.

The following script defines the loss function and the optimizer:

Now we have everything that is needed to train the model. The following script trains the model:

The number of epochs is set to 300, which means that to train the model, the complete dataset will be used 300 times. A for loop executes for 300 times and during each iteration, the loss is calculated using the loss function. The loss during each iteration is appended to the aggregated_loss list. To update the weights, the backward() function of the single_loss object is called. Finally, the step() method of the optimizer function updates the gradient. The loss is printed after every 25 epochs.

The output of the script above is as follows:

The following script plots the losses against epochs: 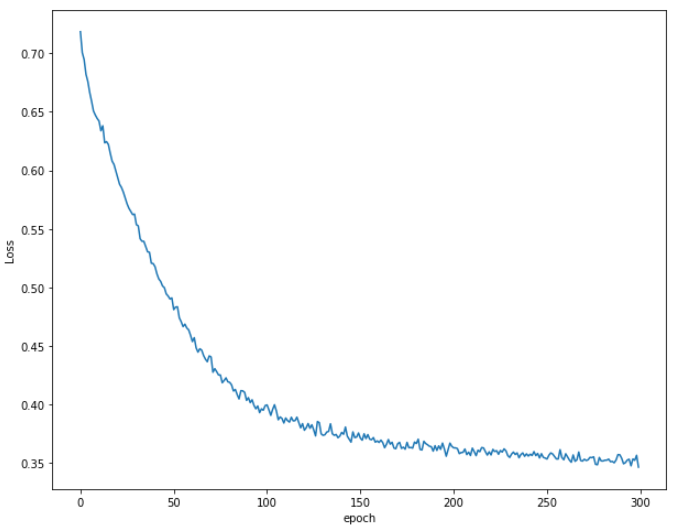 The output shows that initially the loss decreases rapidly. After around the 250th epoch, there is a very little decrease in the loss.

The loss on the test set is 0.3685, which is slightly more than 0.3465 achieved on the training set which shows that our model is slightly overfitting.

It is important to note that since we specified that our output layer will contain 2 neurons, each prediction will contain 2 values. For instance, the first 5 predicted values look like this:

The idea behind such predictions is that if the actual output is 0, the value at the index 0 should be higher than the value at index 1, and vice versa. We can retrieve the index of the largest value in the list with the following script:

Finally, we can use the confusion_matrix, accuracy_score, and classification_report classes from the sklearn.metrics module to find the accuracy, precision, and recall values for the test set, along with the confusion matrix.

The output shows that our model achieves an accuracy of 84.65% which is pretty impressive given the fact that we randomly selected all the parameters for our neural network model. I would suggest that you try to change the model parameters i.e. train/test splits, number and size of hidden layers, etc. to see if you can get better results.

PyTorch is a commonly used deep learning library developed by Facebook which can be used for a variety of tasks such as classification, regression, and clustering. This article explains how to use PyTorch library for the classification of tabular data.