Linked Lists are a data structure that represents a linear collection of nodes. A characteristic specific to linked lists is that the order of the nodes isn't dictated by their presence in memory, but rather the pointers that each node has to the next node in the sequence.

As the linked list is one of the most basic, and important, data structures in computer science, we've compiled a list of common interview questions regarding linked lists for this article. Need help studying for your interview? We recommend trying a service like Daily Coding Problem, which will email you practice questions daily.

Insert an element (6) on the 2nd position in the following list:

Let's start off with a simple task - inserting a node into a list. There are a few ways someone can ask you to do this:

Let's cover them one by one first, before diving into the process of removing a node.

To insert a node at the start of a linked list, we simply need to change the current head of the linked list to the new node we're inserting, and also point the inserted node to the old head:

To insert a node at the end of a linked list, we simply need to change the last pointer from null to the new node:

We do this by assigning the newNode as the head, if the list is empty, and iterating to the end of the list if it isn't, adding our node.

What we have to do here is traverse the list, keeping track of the node previous from the node we want to remove.

Write a function that can compare two Strings, represented as Linked Lists such as:

The function can return three values:

Note: "Lexicographically greater" means that a String would appear after the other String based on the dictionary position.

If implemented correctly, using that function on this particular example should produce the following result:

The while loop traverses both lists with two conditions attached:

This means that it will traverse both of the lists, node by node, as long as they don't reach the end of the list, and each character matches between them. If any of these two conditions return false, the loop breaks.

The if statement check whether both of the nodes aren't null:

And the final two if statements simply returns 1 and -1 accordingly if the list sizes don't match.

Ultimately, if it passes all the checks, it means that the lists match and represent the same String, returning 0.

There are two ways to approach this problem: iterative and recursive.

To accomplish this, we instantiate three nodes - prevNode, nextNode and currNode. Both prevNode and nextNode are pointed to null, and currNode is set to be the current head of the linked list.

A while loop is begun with a termination condition of the currNode pointing to null, and the switching process begins:

With that out of the way, let's take a look at the recursive pseudo-code behind the implementation:

Return a random node from a given linked list ensuring that the probability to fetch that specific node is 1/n where n is the size of the list:

There are two ways to approach this problem and come up with a solution:

This approach has a major setback - we need to traverse the list twice. Once to count it and another time to select a random node. In most cases, this approach isn't wanted, so we turn to the other one:

Note: This is in fact a simplified version of Reservoir Sampling, which is often used for selecting k elements from a list containing n items where n is unknown or very large. In this case, we're also selecting k elements, which happens to be a single element.

Even Number of Elements

Find the middle node in the given linked list:

Find the middle node in the given linked list:

This question can have two versions:

Additionally, we also have two approaches:

Let's start off with the pseudo code behind the first approach:

With that out of the way, let's explore the pseudo code behind the second approach:

Find the 5th element from the end of the linked list:

In the case above, we're looking for the node with the value 6, since it's the 5th node looking back from the end of the list.

There are two ways to get to this node:

Let's look at the pseudo code if we're relying on the length of the list:

Let's look at the pseudo code if we're relying on the pointers:

Frequency of a Given Number

Count the number of times a number has occurred in a given linked list:

This is both a common and a simple problem to encounter and tackle, and there's only a couple of steps needed to take in order to come up with a solution:

Implementing the pseudo-code in any language and running it with this list would yield:

Given two linked lists, where a node in the first one points to a node in the second one, in a random place, find the intersection place of these two lists. 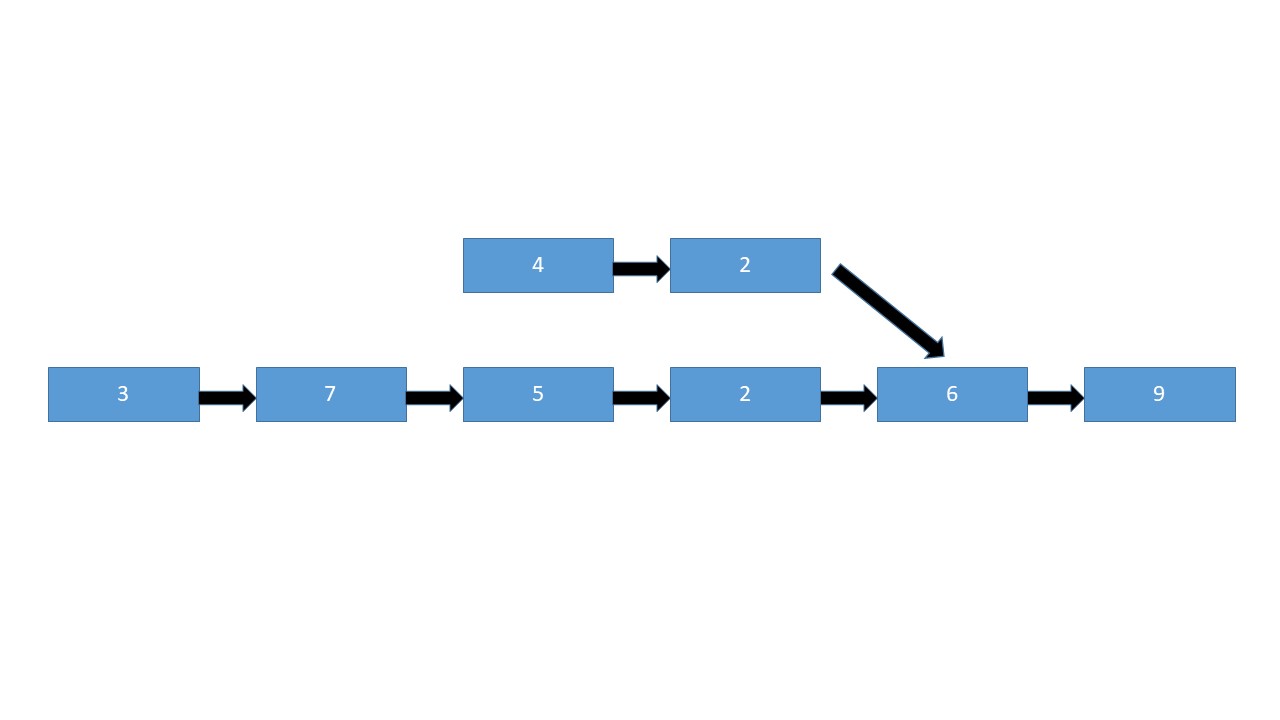 There are several approaches you could take here:

Let's first take a look at the pseudo-code behind the brute force approach:

Now, let's take a look at the pseudo-code behind the hash table approach:

This one is quite simple as well:

Finally, let's take a look at the two pointers approach:

In this article, we've covered the common interview questions related to linked lists.