In this guide, we'll take a look at how to plot a Bar Plot with Plotly.

Bar charts are most commonly used to visualize categorical data, where the height of each bar represents the number of occurrences in that category.

Plot a Bar Plot with Plotly

To plot a Bar Plot in Plotly, you simply call the bar() function of the Plotly Express (px) instance, providing the x and y arguments with valid data: 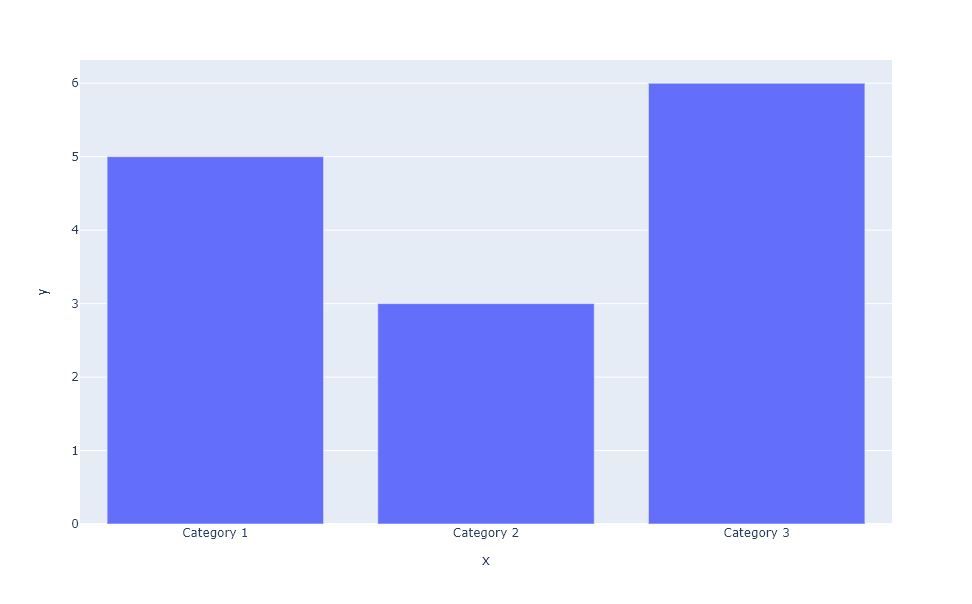 However, we rarely work with lists when doing Data Visualization. Let's import the Telecom Users Dataset and visualize the InternetService and tenure features through a Bar Plot.

The InternetService feature is a categorical feature, that specifies which type of service the customer is using, while the tenure is a numerical feature that represents how long a customer has been with the company, in months:

Now, let's go ahead and plot this data as a Bar Plot:

To plot data from a dataset, we've provided the data source (df) as the first argument, and the column names we'd like to visualize to the x and y arguments. Plotly maps these, fetches the data and generates a plot: 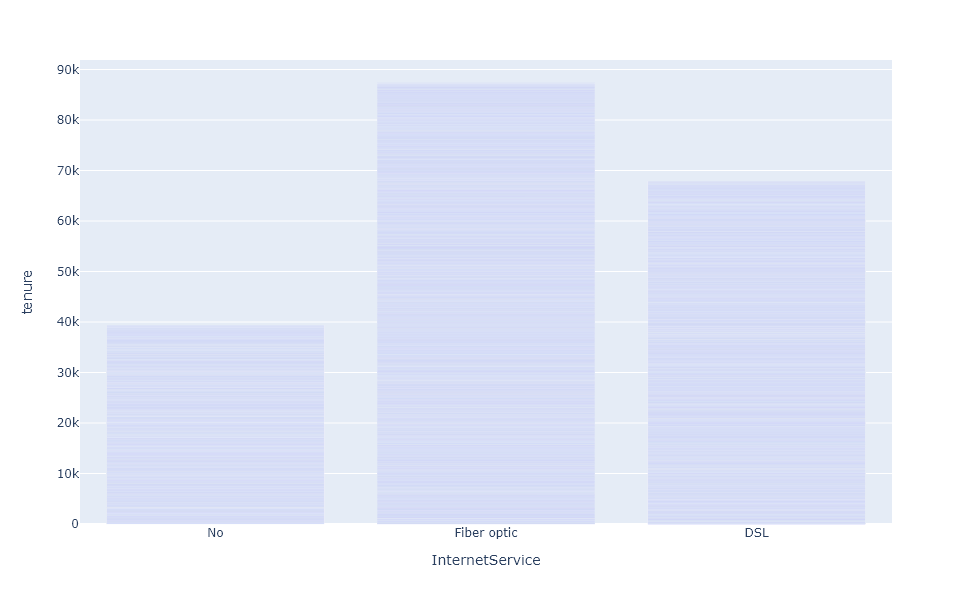 Now, the plot generated by Plotly actually separates each instance into a small stacked bar of its own on this plot, since several rows share the same x value, unlike the simple 1-to-1 mapping like we had in the first example.

It's easy to change the colors of each of the aforementioned instances, based on any other variable present in the dataset. These are most often other categorical features, such as gender or SeniorCitizen.

Let's take a look at the Bar Plot once again, once we color each plot depending on the gender feature:

Now, the default Plotly color-scheme will apply, and the instances will be sorted by color so they're not mish-mashed throughout the plot: 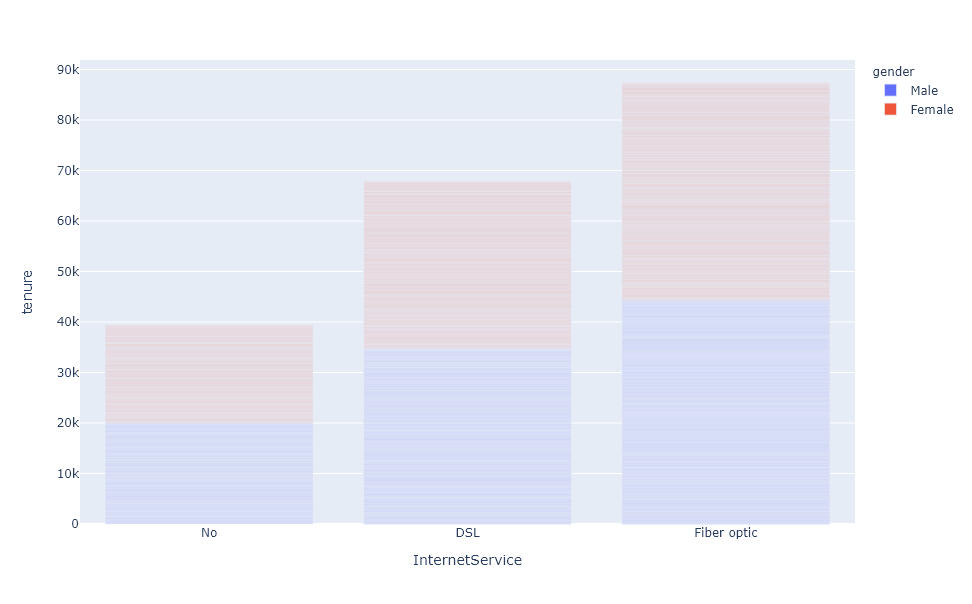 Since we've got multiple rows sharing the same x values - these are plotted, essentially, as stacked grouped bars.

If we were to plot a different feature, that doesn't stack (isn't a binary choice of another feature), the plot would look fairly differently: 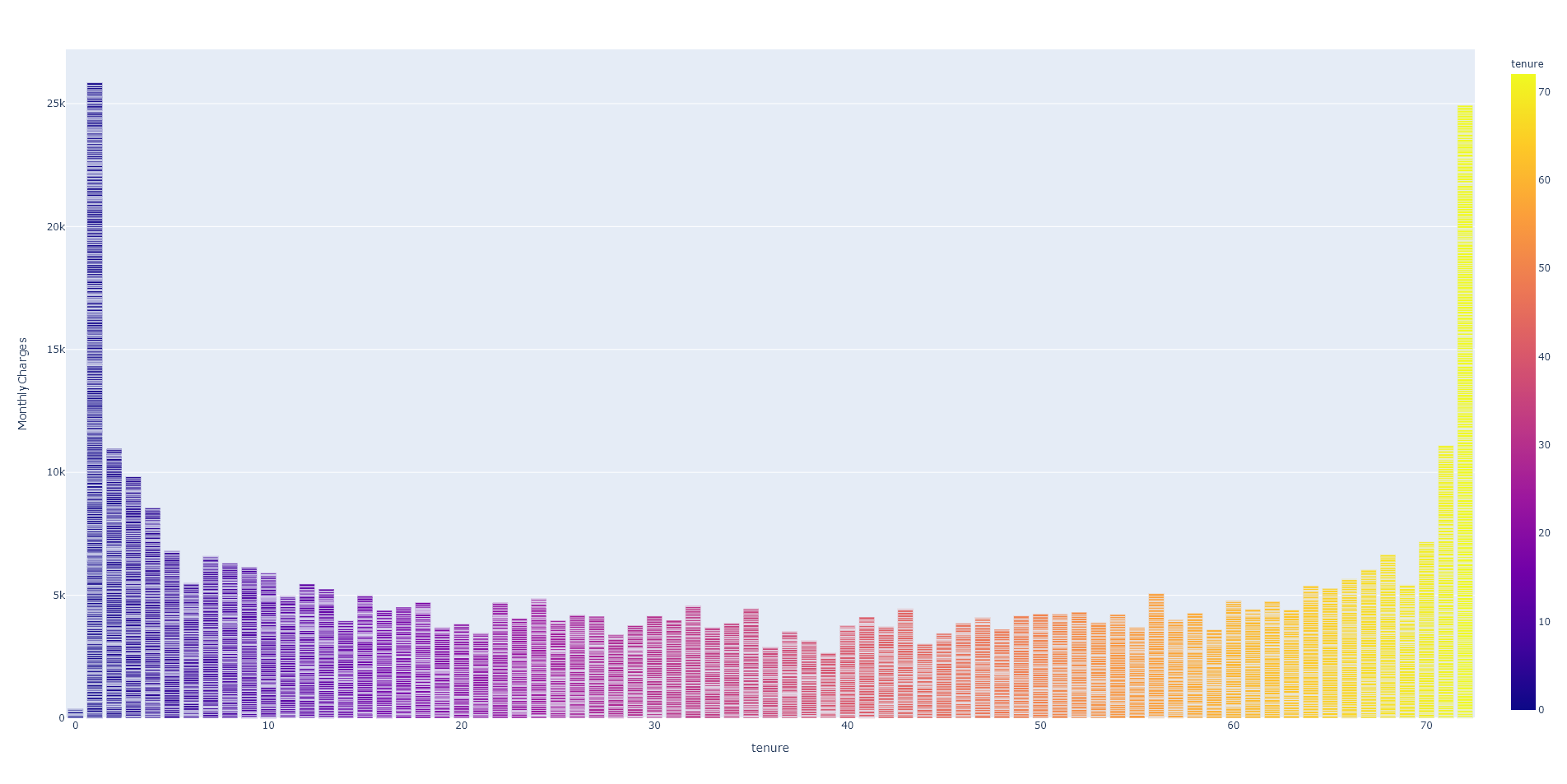 When providing many color values, such as 0..70 via the tenure feature - you'll see beautiful gradients formed in your plots.

Sometimes, it's easier to differentiate if we plot the bars one next to the other, instead of stacking them on top of each other. This is particularly useful when we have binary features, such as SeniorCitizen that only has two values. You can really have n values in features you group by, though, most groups don't really benefit us much if they're too large.

To do this, we can simply update the layout of the Figure, and set the barmode to 'group':

Now, it's much easier to compare the number of instances: 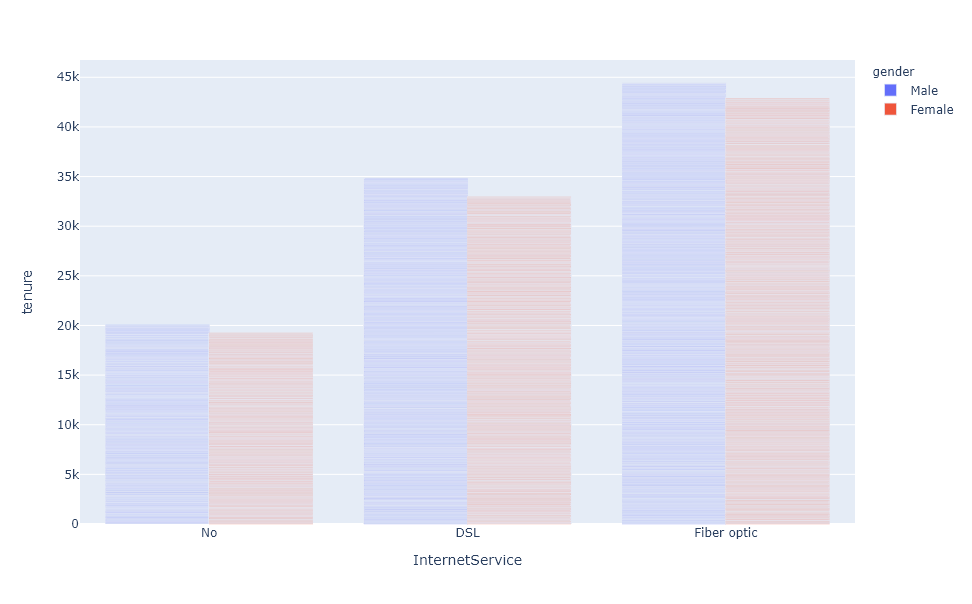 To plot a Bar Plot horizontally using Plotly, we can set the orientation argument to h (as opposed to the default v) while plotting the Bar Plot:

Keep in mind that if you'd like to keep the X-Y relationship as it was before, you'll switch the x and y arguments. Running this code results in: 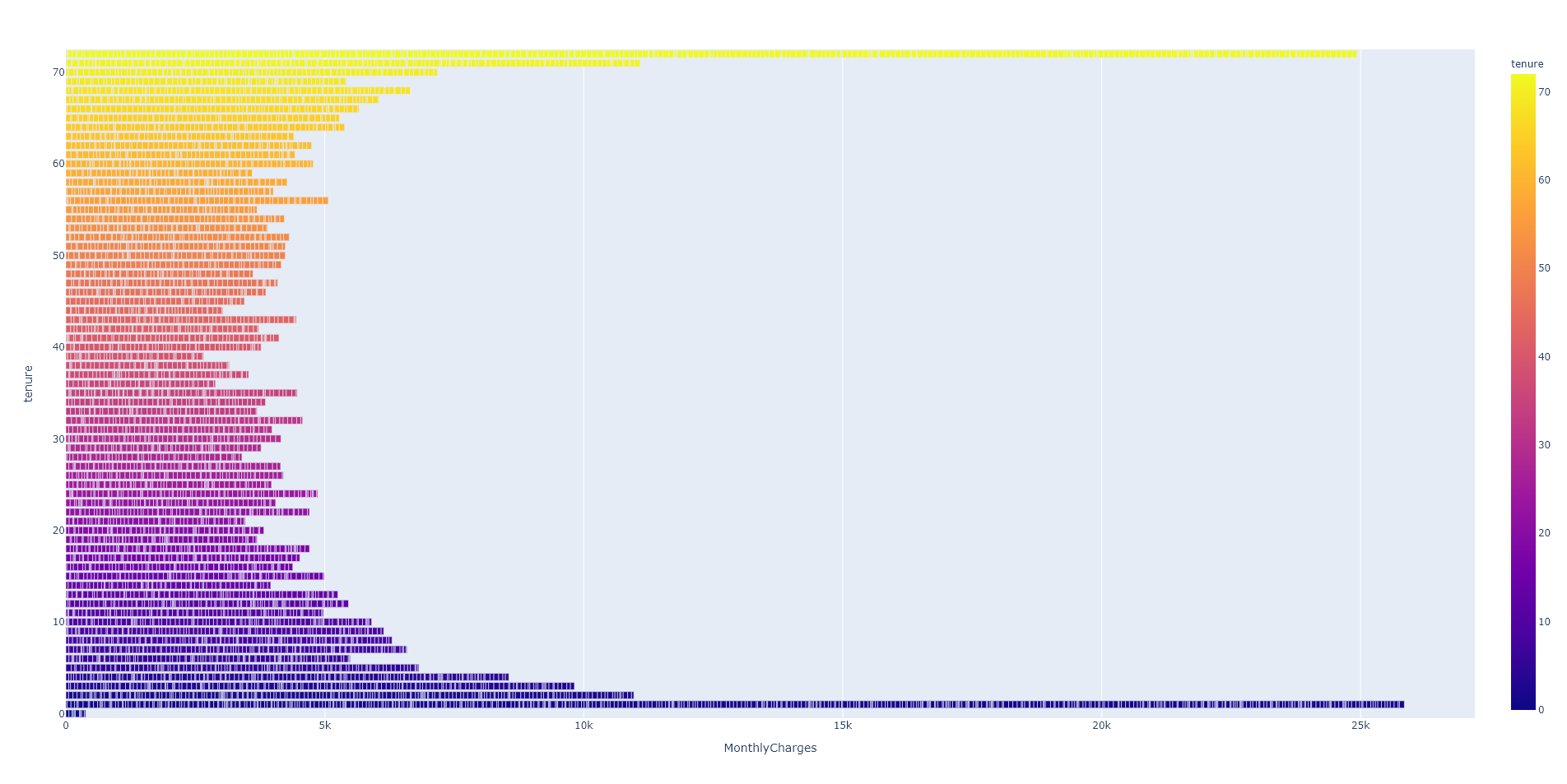 Plotly automatically orders the bars. You can directly modify this setting by updating the Figure parameters.

You can opt for manual ordering, or automatic ordering. For manual ordering, you can pass in a dictionary that contains the names of the features and their order, which will result in a fixed order, to the category_orders argument:

Here, we've ordered the InternetService feature in a specific order, that we've manually set, as well as the gender feature.

Plotting the Bar Plot now will result in: 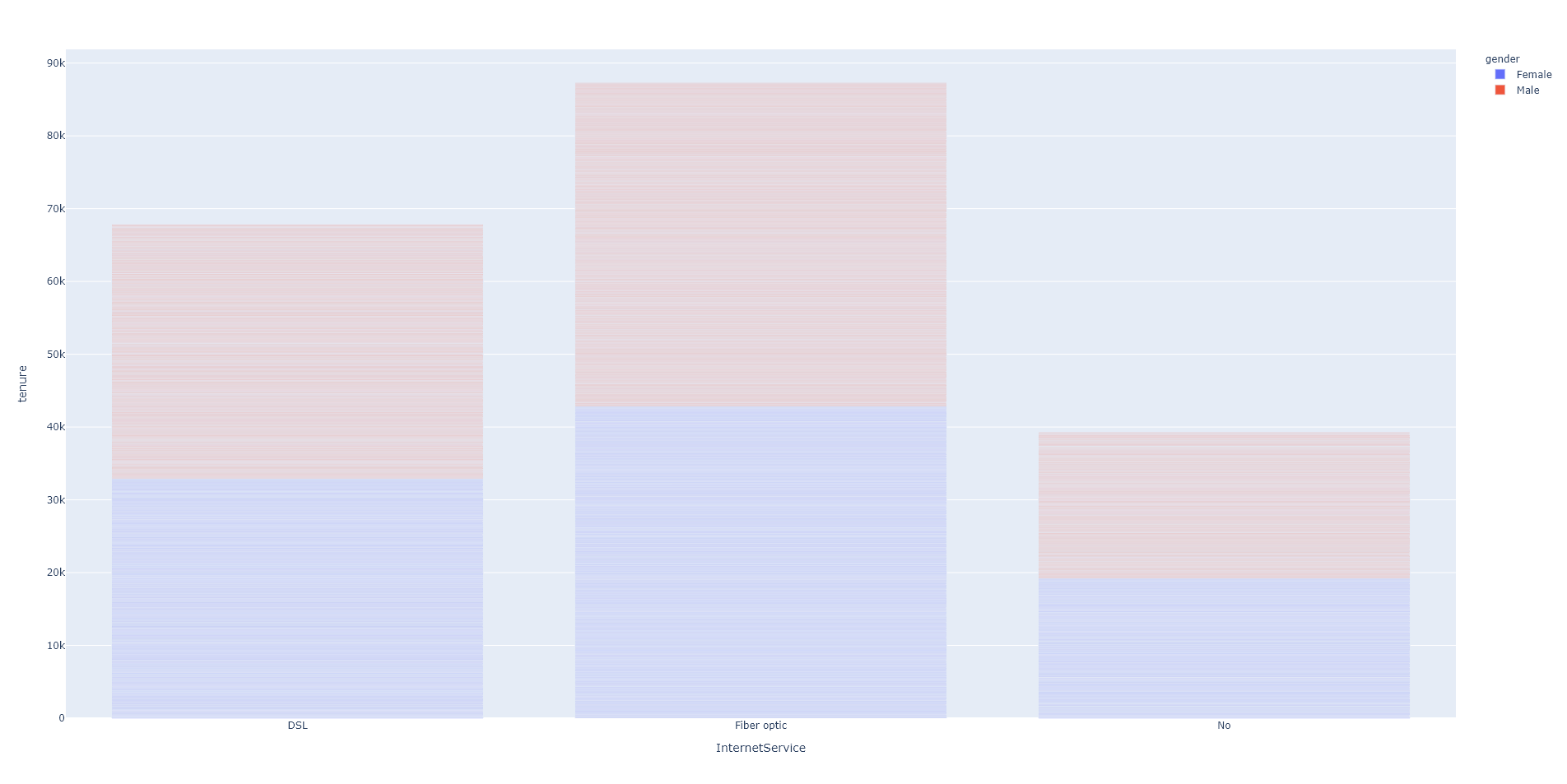 Alternatively, especially if there's a large number of possible values - we might want to let Plotly automatically sort and order values of features. We can either sort them categorically or numerically.

And both of these can further be ordered in ascending or descending order. To order numerically, we invoke the total keyword, while we invoke the category keyword for categorical ordering.

By default, Plotly adjusts the ordering based on the provided data - in our case, it ordered it as total ascending. Let's change that around to total descending: 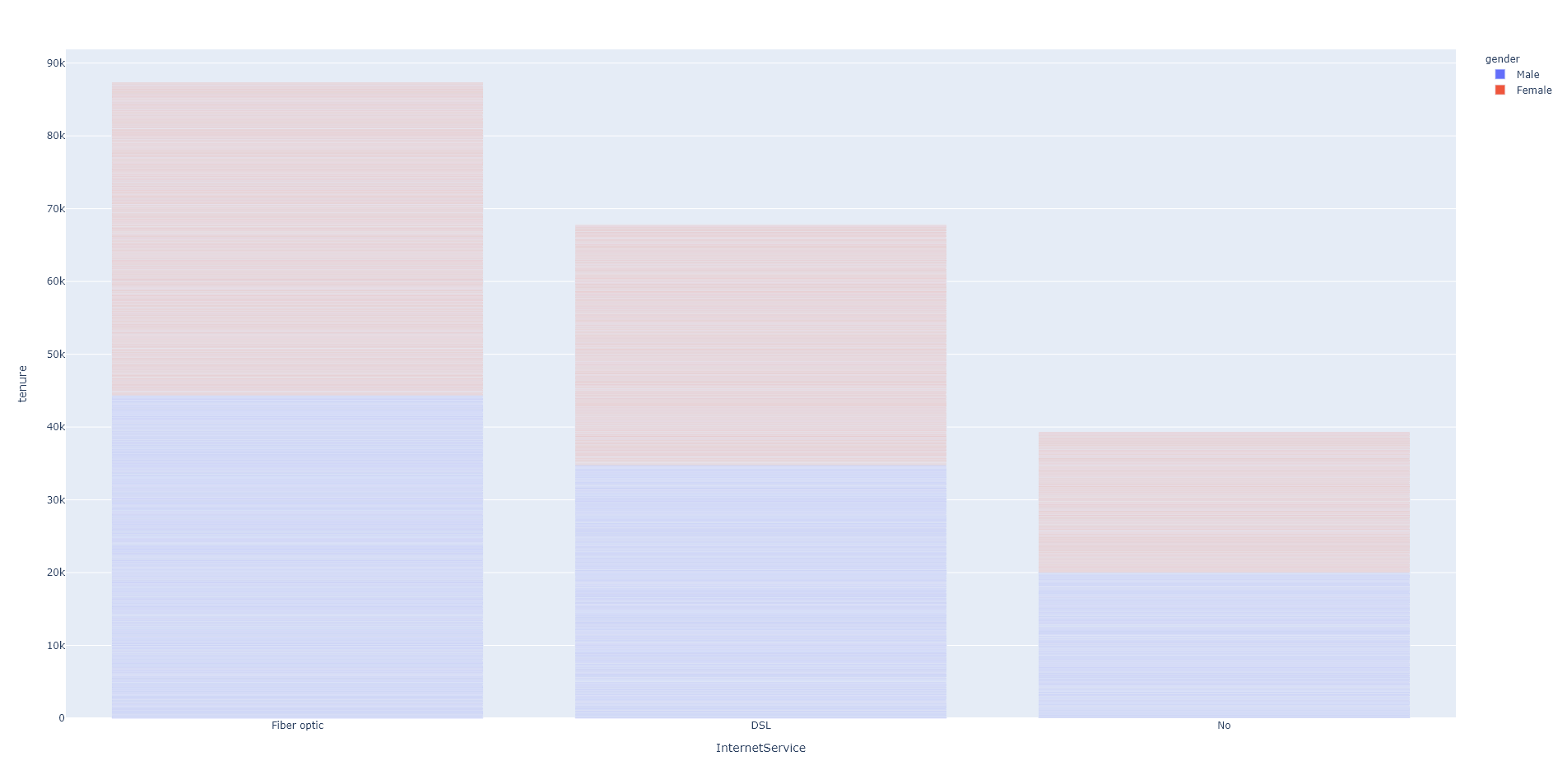 When ordering categorically, it sorts lexicographically: 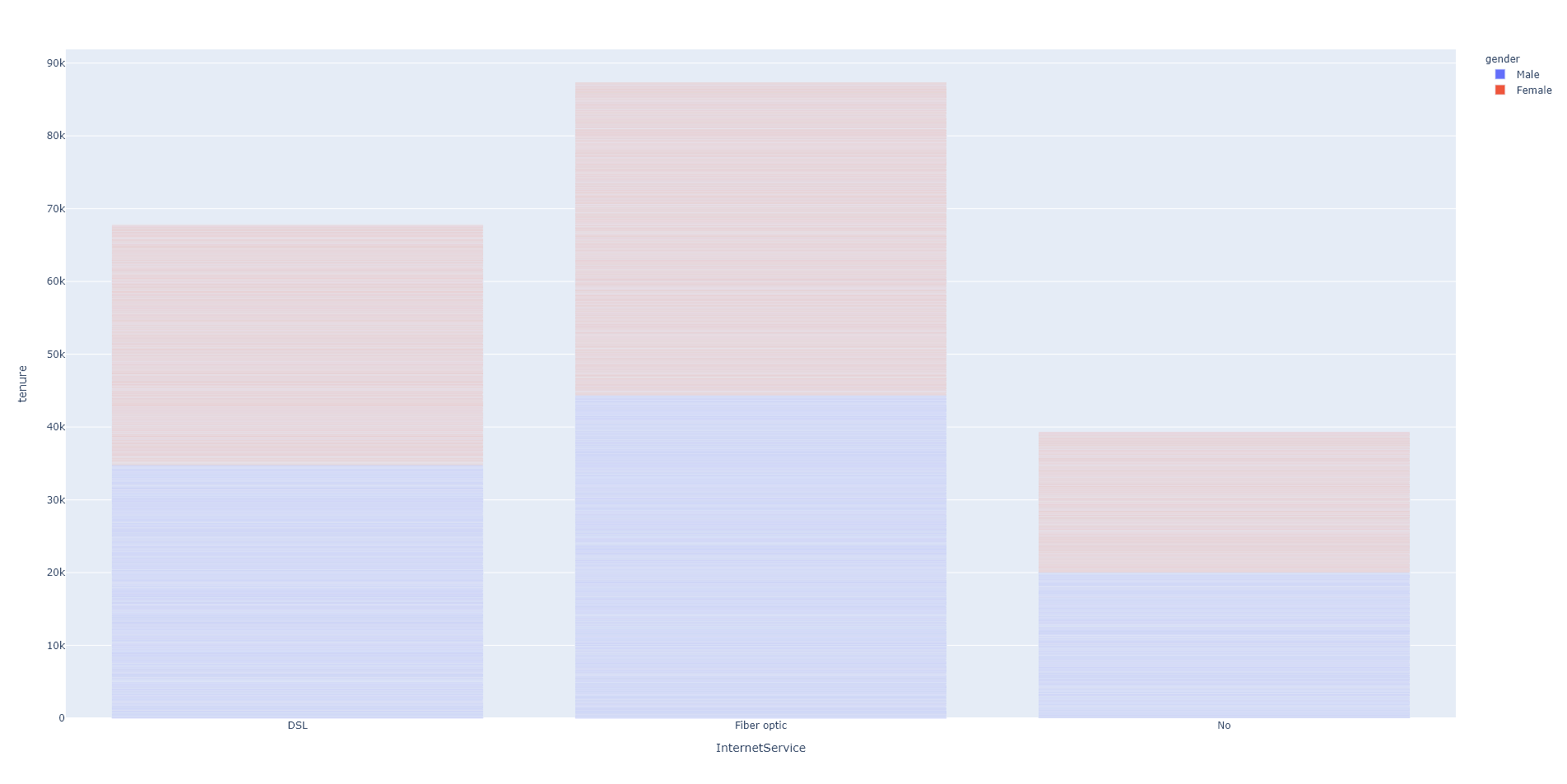 In this tutorial, we've taken a quick look at how to plot and customize Bar Plots with Plotly.