In this guide, we'll take a look at how to plot a Scatter Plot with Plotly.

Scatter Plots explore the relationship between two numerical variables (features) of a dataset.

We'll be working with the Heart Attack Dataset from Kaggle, which contains data on various bodily metrics that we could use as indicators of a heart attack possibility.

Let's import the dataset and print the head() to take a peek:

Let's explore the relationships between features such as the thalachh (maximum recorded heart rate), trtbps (resting blood pressure), chol (amount of cholesterol) and output (0 or 1, representing lower or higher chances of experiencing a heart attack respectively).

First, let's go ahead and save our features separately for brevity's sake:

Plot a Scatter Plot with Plotly

The only required arguments are the x and y features, which will plot a Scatter Plot (without axis labels) in a spun-up server on your browser of choice: 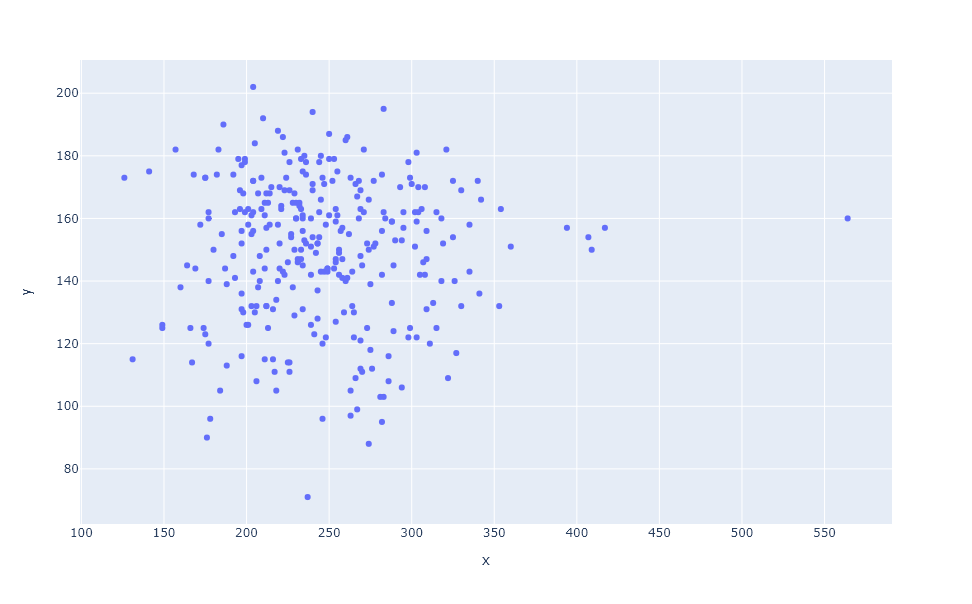 Alternatively, if you don't want to define your variables beforehand, Plotly offers the exact same syntax as Seaborn - you specify the data source, and the names of the features you'd like to visualize. This will map the features to labels, and plot them directly without having to specify the features like we did before: 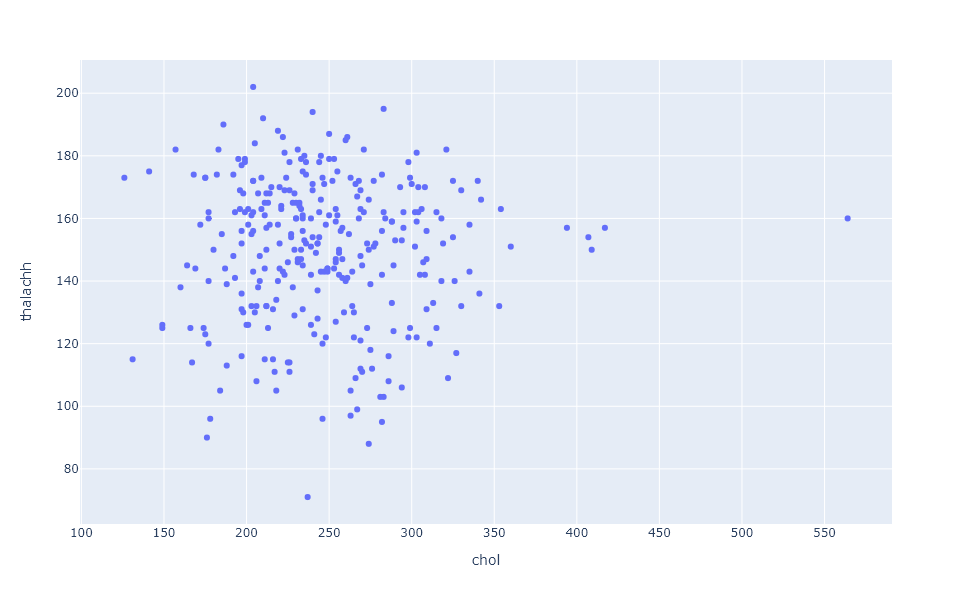 Note: You can also do a mish-mash of these approaches, where you supply your DataFrame as the source, but also use pre-defined variables instead of referencing the feature column-names in the scatter() call:

This results in a labeled Scatter Plot as well:

There doesn't seem to be much of a correlation between the cholesterol level and maximum heart rate of individuals in this dataset.

Now, we rarely visualize plain plots. The point is to visualize certain characteristics of data, intuitively.

In our case, this might include coloring the markers depending on the output feature, or adding hover_data, which specifies what's shown on the markers when someone hovers over them.

Currently, the hover_data isn't very helpful, only showing us the x and y values, which can already be reasonably inferred from observing the resulting plot.

Let's go ahead and change a few of the parameters to make this plot a bit more intuitive:

We've set the color of each marker to be mapped to the output feature, coloring higher and lower chances of experiencing a heart attack in different colors. We've also included the sex and age of each individual on their markers. 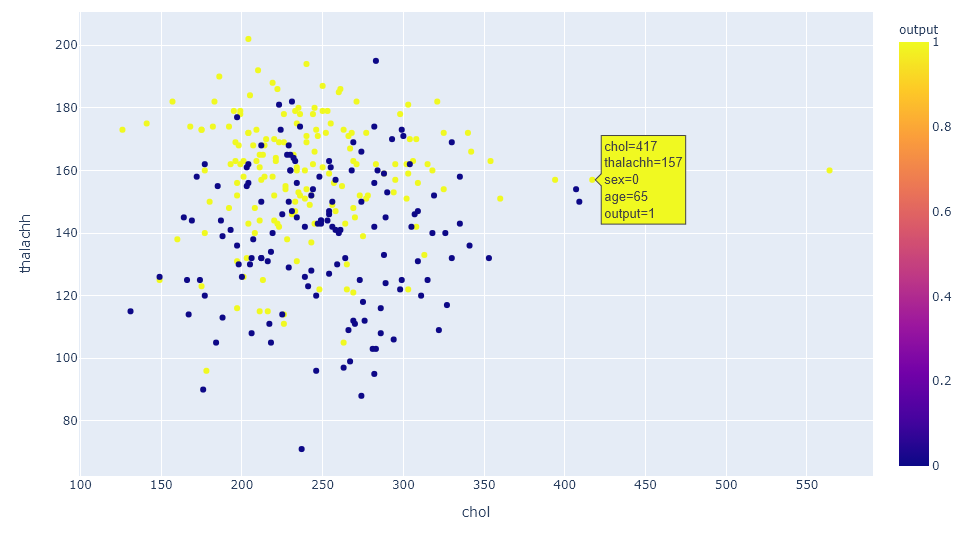 Finally, you can also change the size of the marker, either passing it a scalar value (such as 5) to the fig.update_traces() method, or by passing in a vector value (such as mapping the size to a feature) to the size argument.

Let's map the oldpeak feature with the size of each marker:

Now, each marker will have a variable size, depending on the values of the oldpeak feature: 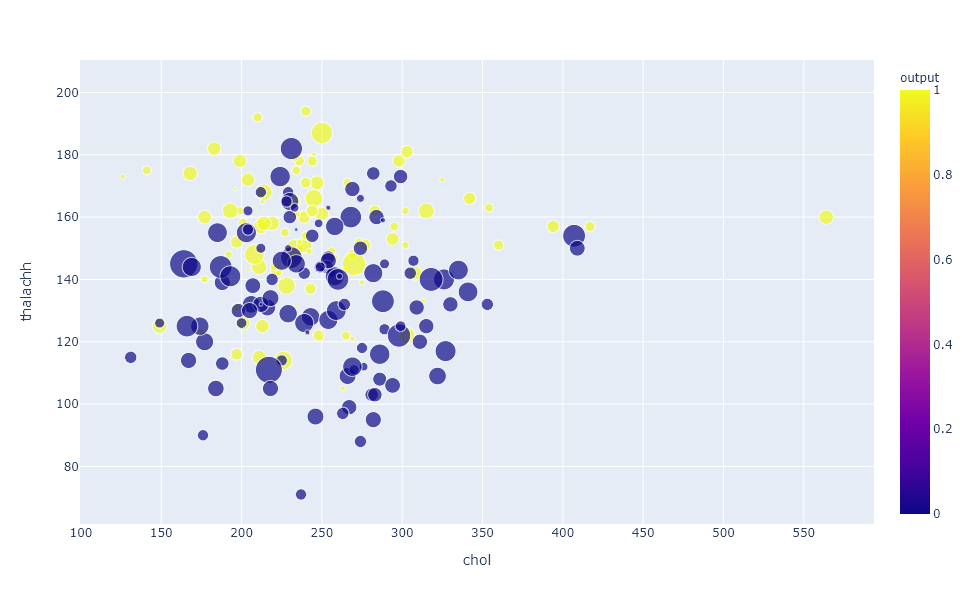 Or, if you want to specifically make all markers of the same, fixed size, you can update the Figure's traces: 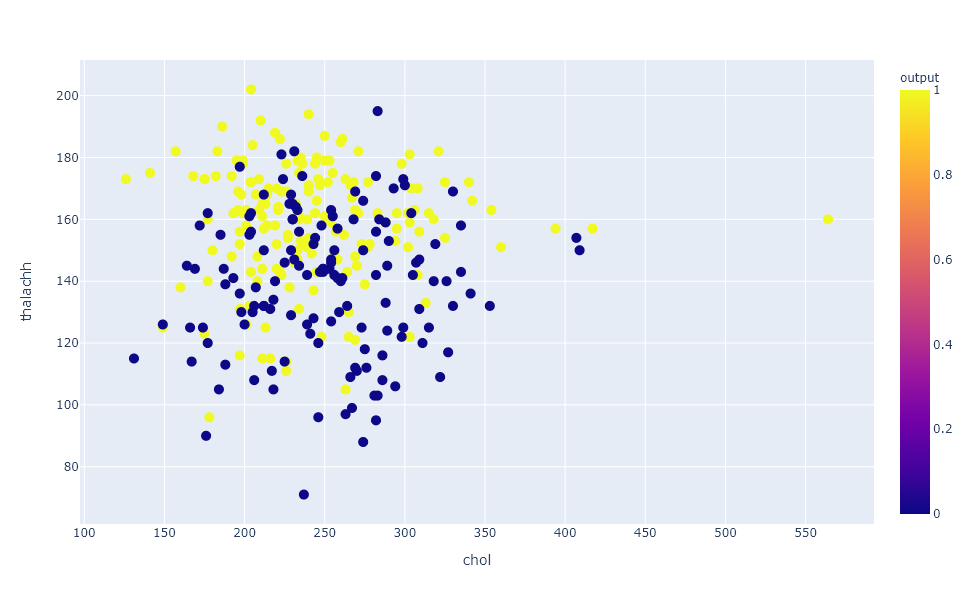 In this guide, we've taken a look at how to plot a Scatter Plot using Python and Plotly.