In Python, there are two options/methods for running code:

In this article, we will see the difference between the modes and will also discuss the pros and cons of running scripts in both of these modes.

Interactive mode, also known as the REPL provides us with a quick way of running blocks or a single line of Python code. The code executes via the Python shell, which comes with Python installation. Interactive mode is handy when you just want to execute basic Python commands or you are new to Python programming and just want to get your hands dirty with this beautiful language.

To run your Python statements, just type them and hit the enter key. You will get the results immediately, unlike in script mode. For example, to print the text "Hello World", we can type the following:

Here are other examples:

We can also run multiple statements on the Python shell. A good example of this is when we need to declare many variables and access them later. This is demonstrated below:

Using the method demonstrated above, you can run multiple Python statements without having to create and save a script. You can also copy your code from another source then paste it on the Python shell.

The above example also demonstrates how we can run multiple Python statements in interactive mode. The two print statements have been indented using four spaces. Just like in script mode, if you don't indent properly you will get an error. Also, to get the output after the last print statement, you should press the enter key twice without typing anything.

You can also get help with regards to a particular command in interactive mode. Just type the help() command on the shell and then hit the enter key. You will see the following:

Now to find the help for a particular command, simple type that command, for instance, to find help for the print command, simply type print and hit the enter key. The result will look like this:

As shown in the above output, the help utility returned useful information regarding the print command including what the command does and what are some of the arguments that can be used with the command.

To exit help, type q for "quit" and then hit the enter key. You will be taken back to the Python shell.

Pros and Cons of Interactive Mode

The following are the advantages of running your code in interactive mode:

The following are the disadvantages of running your code in the interactive mode:

Next, we will be discussing the script mode.

If you need to write a long piece of Python code or your Python script spans multiple files, interactive mode is not recommended. Script mode is the way to go in such cases. In script mode, You write your code in a text file then save it with a .py extension which stands for "Python". Note that you can use any text editor for this, including Sublime, Atom, notepad++, etc.

If you are in the standard Python shell, you can click "File" then choose "New" or simply hit "Ctrl + N" on your keyboard to open a blank script in which you can write your code. You can then press "Ctrl + S" to save it.

After writing your code, you can run it by clicking "Run" then "Run Module" or simply press F5.

Let us create a new file from the Python shell and give it the name "hello.py". We need to run the "Hello World" program. Add the following code to the file:

Click "Run" then choose "Run Module". This will run the program: 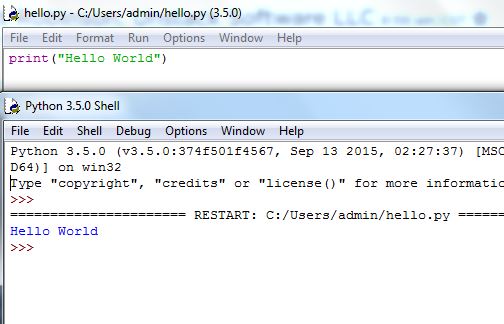 Other than executing the program from the graphical user interface, we can do it from the terminal of the operating system. However, you must be aware of the path to the directory where you have saved the file.

Open the terminal of your operating system then navigate to the location of the file. Of course, you will use the "cd (change directory)" command for this.

Once you reach the directory with the file, you will need to invoke the Python interpreter on the file. This can be done using the following syntax:

To run the Python file from the terminal, you just have to type the python keyword followed by the name of the file. In our case, we need to run a file named "hello.py". We need to type the following on the terminal of the operating system:

If you want to get to the Python shell after getting the output, add the -i option to the command. This is demonstrated below:

The following example demonstrates how to execute the multiple lines of code using the Python script. 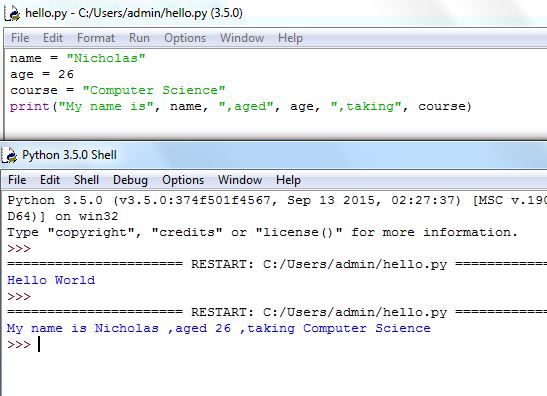 Pros and Cons of Script Mode

The following are the advantages of running your code in script mode:

The following are the disadvantages of using the script mode: