What is Python zlib

The Python zlib library provides a Python interface to the zlib C library, which is a higher-level abstraction for the DEFLATE lossless compression algorithm. The data format used by the library is specified in the RFC 1950 to 1952, which is available at http://www.ietf.org/rfc/rfc1950.txt.

The zlib compression format is free to use, and is not covered by any patent, so you can safely use it in commercial products as well. It is a lossless compression format (which means you don't lose any data between compression and decompression), and has the advantage of being portable across different platforms. Another important benefit of this compression mechanism is that it doesn't expand the data.

The main use of the zlib library is in applications that require compression and decompression of arbitrary data, whether it be a string, structured in-memory content, or files.

One of the best things, in my opinion, about the zlib library is that it is compatible with the gzip file format/tool (which is also based on DEFLATE), which is one of the most widely used compression applications on Unix systems.

Compressing a String of Data

The zlib library provides us with the compress function, which can be used to compress a string of data. The syntax of this function is very simple, taking only two arguments:

An example of using the compress method on a simple string is shown below:

And the result is as follows:

If we change the level to 0 (no compression), then line 5 becomes:

And the new result is:

You may notice a few differences comparing the outputs when using 0 or 2 for the compression level. Using a level of 2 we get a string (formatted in hexadecimal) of length 38, whereas with a level of 0 we get a hex string with length 44. This difference in length is due to the lack of compression in using level 0.

If you don't format the string as hexadecimal, as I've done in this example, and view the output data you'll probably notice that the input string is still readable even after being "compressed", although it has a few extra formatting characters around it.

Large data streams can be managed with the compressobj() function, which returns a compression object. The syntax is as follows:

The main difference between the arguments of this function and the compress() function is (aside from the data parameter) the wbits argument, which controls the window size, and whether or not the header and trailer are included in the output.

The possible values for wbits are:

The method argument represents the compression algorithm used. Currently the only possible value is DEFLATED, which is the only method defined in the RFC 1950. The strategy argument relates to compression tuning. Unless you really know what you're doing I'd recommend to not use it and just use the default value.

The following code shows how to use the compressobj() function:

After running this code, the result is:

As we can see from the figure above, the phrase "Hello world" has been compressed. Typically this method is used for compressing data streams that won't fit into memory at once. Although this example does not have a very large stream of data, it serves the purpose of showing the mechanics of the compressobj() function.

You may also be able to see how it would be useful in a larger application in which you can configure the compression and then pass around the compression object to other methods/modules. This can then be used to compress chunks of data in series.

You may also be able to see how it would be useful in a scenario where you have a data stream to compress. Instead of having to accumulate all of the data in memory, you can just call compress.compress(data) and compress.flush() on your data chunk and then move on to the next chunk while leaving the previous one to be cleaned up by garbage collection.

We can also use the compress() function to compress the data in a file. The syntax is the same as in the first example.

In the example below we will compress a PNG image file named "logo.png" (which, I should note, is already a compressed version of the original raw image).

The example code is as follows:

In the above code, the zlib.compress(...) line uses the constant Z_BEST_COMPRESSION, which, as the name suggests, gives us the best compression level this algorithm has to offer. The next line then calculates the level of compression based on the ratio of length of compressed data over length of original data.

The only difference between this example and our first one is the source of the data. However, I think it is important to show so you can get an idea of what kind of data can be compressed, whether it be just an ASCII string or binary image data. Simply read in your data from the file like you normally would and call the compress method.

Saving Compressed Data to a File

The compressed data can also be saved to a file for later use. The example below shows how to save some compressed text into a file:

The above example compresses our simple "Hello world" string and saves the compressed data into a file named "outfile.txt". The "outfile.txt" file, when opened with our text editor, looks as follows: 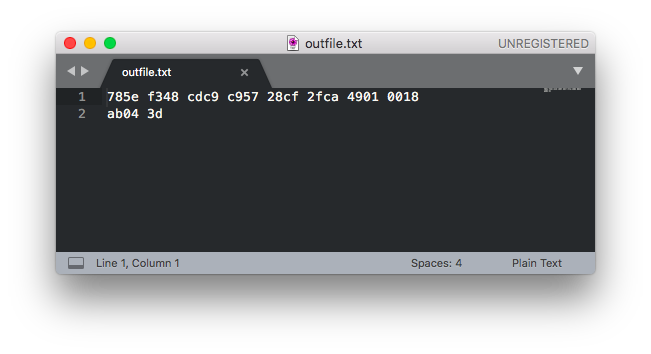 Decompressing a String of Data

A compressed string of data can be easily decompressed by using the decompress() function. The syntax is as follows:

This function decompresses the bytes in the data argument. The wbits argument can be used to manage the size of the history buffer. The default value matches the largest window size. It also asks for the inclusion of the header and trailer of the compressed file. The possible values are:

The initial value of the buffer size is indicated in the bufsize argument. However, the important aspect about this parameter is that it doesn't need to be exact, because if extra buffer size is needed, it will automatically be increased.

The following example shows how to decompress the string of data compressed in our previous example:

Decompressing big data streams may require memory management due to the size or source of your data. It's possible that you may not be able to use all of the available memory for this task (or you don't have enough memory), so the decompressobj() method allows you to divide up a stream of data in to several chunks which you can decompress separately.

The syntax of the decompressobj() function is as follows:

This function returns a decompression object, which what you use to decompress the individual data. The wbits argument has the same characteristics as in decompress() function previously explained.

The following code shows how to decompress a big stream of data that is stored in a file. Firstly, the program creates a file named "outfile.txt", which contains the compressed data. Note that the data is compressed using a value of wbits equal to +15. This ensures the creation of a header and a trailer in the data.

The file is then decompressed using chunks of data. Again, in this example the file doesn't contain a massive amount of data, but nevertheless, it serves the purpose of explaining the buffer concept.

The code is as follows:

After running the above code, we obtain the following results:

Decompressing Data from a File

The compressed data contained in a file can be easily decompressed, as you've seen in previous examples. This example is very similar to the previous one in that we're decompressing data that originates from a file, except that in this case we're going back to using the one-off decompress method, which decompresses the data in a single method call. This is useful for when your data is small enough to easily fit in memory.

This can be seen from the following example:

The above program opens the file "compressed.dat" created in a previous example, which contains the compressed "Hello world" string.

In this example, once the compressed data is retrieved and stored in the variable compressed_data, the program decompresses the stream and shows the result on the screen. As the file contains a small amount of data, the example uses the decompress() function. However, as the previous example shows, we could also decompress the data using the decompressobj() function.

After running the program we get the following result:

Keep in mind that the zlib library also has quite a few more features than what we were able to cover in this article. For example you can use zlib to compute the checksum of some data to verify its integrity when decompressed. For more information on additional features like this, check out the official documentation.