The Prototype Design Pattern in Python In this guide, we'll take a look at the theory and implementation of the Prototype Design Pattern in Python and when you can benefit from leveraging it.

Design Patterns are solutions to common issues, typically present, but not limited to, the Object-Oriented Programming (OOP) architectures. OOP is one of the most most common programming paradigms, due to its intuitive nature and how well it can reflect the real world. Through OOP, we abstract the physical world into software, allowing us to naturally observe and write code. Each entity becomes an object and these objects can relate to other objects - forming a hierarchy of objects in a system.

While this approach is very intuitive and natural for us - things can get hectic real quick, just like the real world can. With many relationships, interactions and outcomes - it's hard to maintain everything in a coherent manner. Be it creation, structure or behavior, scaling these systems can become very tricky, and with each wrong step - you're deeper entrenched into the problem. This is why Design Patterns are applied and widely-used today.

The OOP paradigm commonly leverages the usage of abstract classes, which are not a built-in feature in Python. To achieve this funcntionality, we use the ABC (Abstract Base Classes) library.

Through ABC, we'll be able to define abstract classes and form subclasses based on them, which allows us to implement this pattern.

Again, Design Patterns are standardized practices and structures that help us build scalable, clean implementations in OOP architectures. They typically provide a base structure to follow when writing code, and can be customized as long as you follow the fundamental concept of the pattern.

The Prototype Design Pattern is typically applied when cloning is a cheaper operation than creating a new object and when the creation necessitates long, expensive calls. These calls are commonly tied to expensive database operations, but can be other expensive processes.

To simulate this - we'll mock an expensive process call in the creation of our objects, lasting entire three seconds. Then, using the Prototype Design Pattern - we'll create new objects while avoiding this limitation.

To facilitate this functionality, we'll make use of two classes: 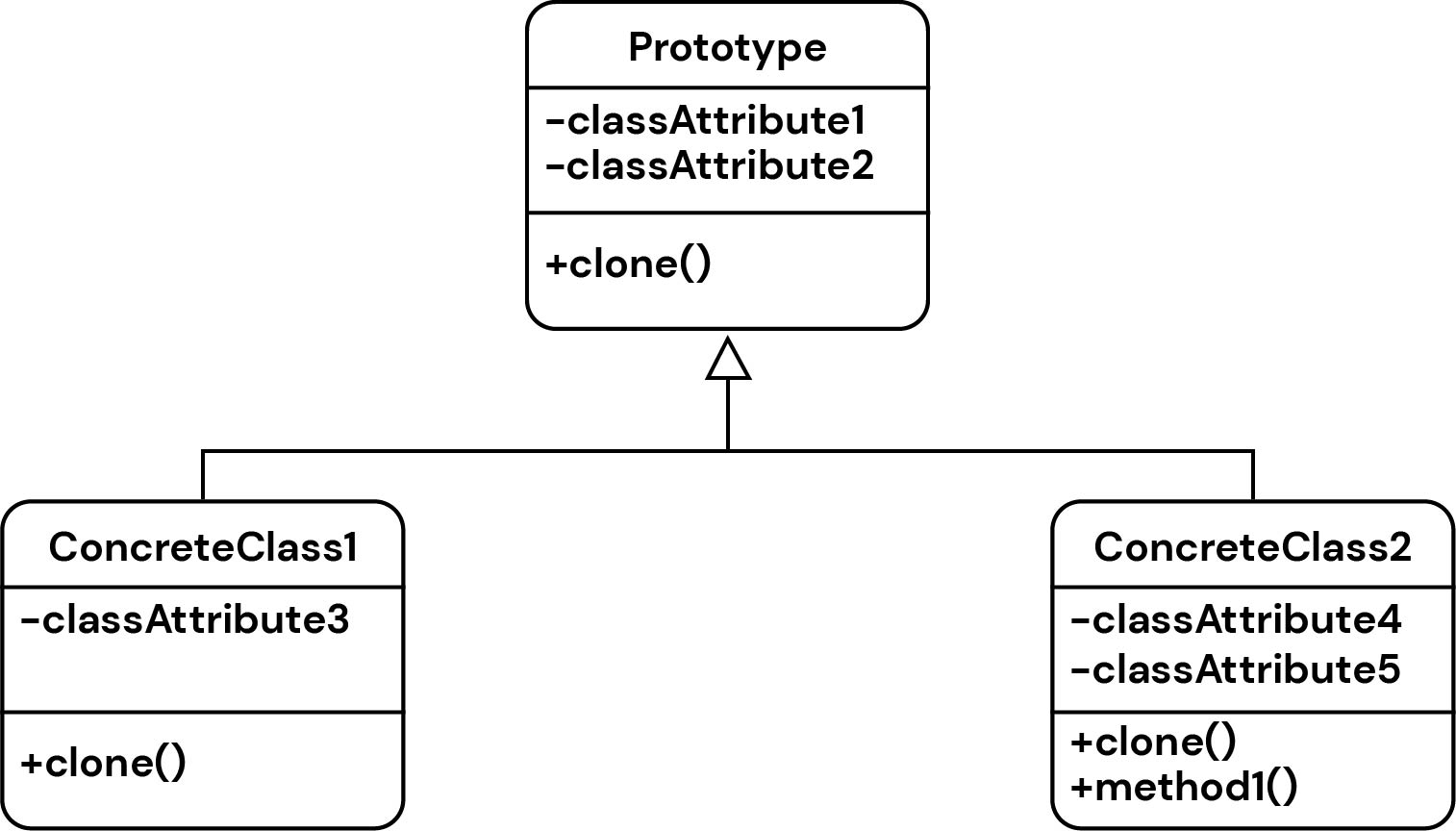 The Prototype Pattern Implementation in Python

We'll be creating a couple of NPC types for a fictional video game - a Shopkeeper, a Warrior and a Mage.

Each of them are an NPC, a common superclass - but they'll have different attributes. The Shopkeeper has charisma, so they can barter better, while the Mage has mana instead of stamina, like the Warrior does.

Finally, since the classes would be unusable in a reasonable manner otherwise - we'll leverage the Prototype pattern to mitigate this issue and regain performance.

Let's start off with the superclass - the Prototype for the NPCs. Its clone() method will be empty, but its subclasses will implement it. Naturally, it'll also contain all of the base attributes for the subclasses. Since we want all subclasses to necessarily implement the clone() method, it's marked as an @abstractmethod. The annotation stems from the ABC library and abstract methods don't provide an implementation, but have to be implemented by subclasses:

Now, let's define our concrete classes based on the Prototype. We'll be overriding the clone() method and actually provide an implementation for it. To copy the objects, we'll make use of the copy library, which is built-in into Python. The copy() method of the library performs a shallow copy of an object, while a deepcopy() creates a deep copy of an object. Depending on the structure of your objects - you'll prefer one or the other.

A shallow copy will just copy the references to non-primitive fields, such as dictionaries, lists, sets or other classes. A deep copy will create new instances, with the same data. This means that for shallow copies - you might end up changing the fields of multiple classes instead of one, since multiple objects may share the same field through the same reference.

Shallow copies are cheaper operations, since they don't instantiate anything new for non-primitive types. In general, these types might not be expensive to instantiate, so you won't gain much. But, if you class has expensive fields as well - those that take time to instantiate, a shallow copy will be much more performant than a deep copy, at the cost of sharing the same objects in memory.

That being said, let's define our subclasses. Instead of accepting values through the constructor, we'll supply some base-values for all instances of these concrete classes:

The Warrior NPC has another set of base-values:

And finally, the Mage:

Now, we can test out the pattern. First, we'll create an instance of a Shopkeeper as it is, keeping note of the time it takes:

This results in a 6 second wait - 3 from the Prototype and 3 from the Shopkeeper, but ultimately creates the object 6 seconds later:

As expected, this is a painfully slow operation. What happens if we need another shopkeeper? Or better yet - what if we need 5 more shopkeepers? Let's instantiate a guild that contains 5 shopkeepers:

Instead, we can clone the first shopkeeper, considering the fact that they all follow the same pattern, and can be substituded:

Now, all it takes is the first template Shopkeeper to be instantiated, and we can clone it in nanoseconds. The entire 5 clones took only 0.001 seconds to perform.

Now, we can create an entire population of different NPCs without an issue:

In this guide, we've taken a look at how to implement the Prototype Design Pattern in Python and demonstrated a tremendous boost in performance when using it to clone expensive instances rather than creating new ones.