Advanced OpenGL in Python with PyGame and PyOpenGL Following the previous article, Understanding OpenGL through Python where we've set the foundation for further learning, we can jump into OpenGL using PyGame and PyOpenGL.

As mentioned in the previous article, OpenGL is very old so you won't find many tutorials online on how to properly use it and understand it because all of the top dogs are already knee-deep in new technologies.

First off, we need to install PyGame and PyOpenGL if you haven't already:

Note: You can find a more detailed installation in the previous OpenGL article.

If you have problems concerning the installation, PyGame's "Getting Started" section might be a good place to visit.

Since there's no point in unloading 3 books worth of graphics theory on you, we'll be using the PyGame library to give us a head start. It will essentially just shorten the process from project initialization to actual modeling and animating.

Next, we get to the initialization:

While the initialization is only three lines of code, each deserves at least a simple explanation:

Double buffering means that there are two images at any given time - one that we can see and one that we can transform as we see fit. We get to see the actual change caused by the transformations when the two buffers swap.

Since we have our viewport set up, next we need to specify what we'll be seeing, or rather where the "camera" will be placed, and how far and wide it can see.

This is known as the frustum - which is just a cut off pyramid that visually represents the camera's sight (what it can and can't see).

A frustum is defined by 4 key parameters:

So, let's go ahead and implement the camera with these parameters in mind, using OpenGL C code:

To better understand how a frustum works, here's a reference picture: 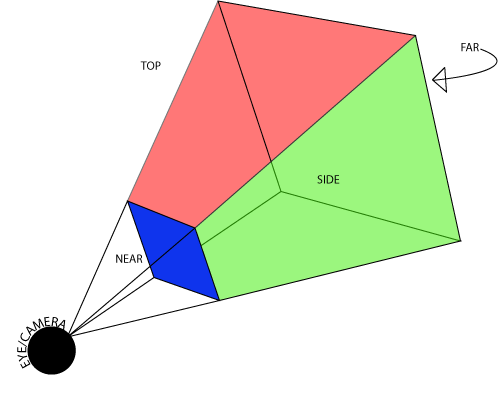 Near and far planes are used for better performance. Realistically, rendering anything outside our field of vision is a waste of hardware performance that could be used rendering something that we can actually see.

So everything that the player can't see is implicitly stored in memory, even though it isn't visually present. Here's a great video of how rendering only within the frustum looks like.

After this setup, I imagine we're asking ourselves the same question:

Well this is all fine and dandy, but how do I make a Super Star Destroyer?

Well... with dots. Every model in OpenGL object is stored as a set of vertices and a set of their relations (which vertices are connected). So theoretically if you knew the position of every single dot that is used to draw a Super Star Destroyer, you could very well draw one!

There are a few ways we can model objects in OpenGL:

So, to draw a cube for example, we first need to define its vertices: 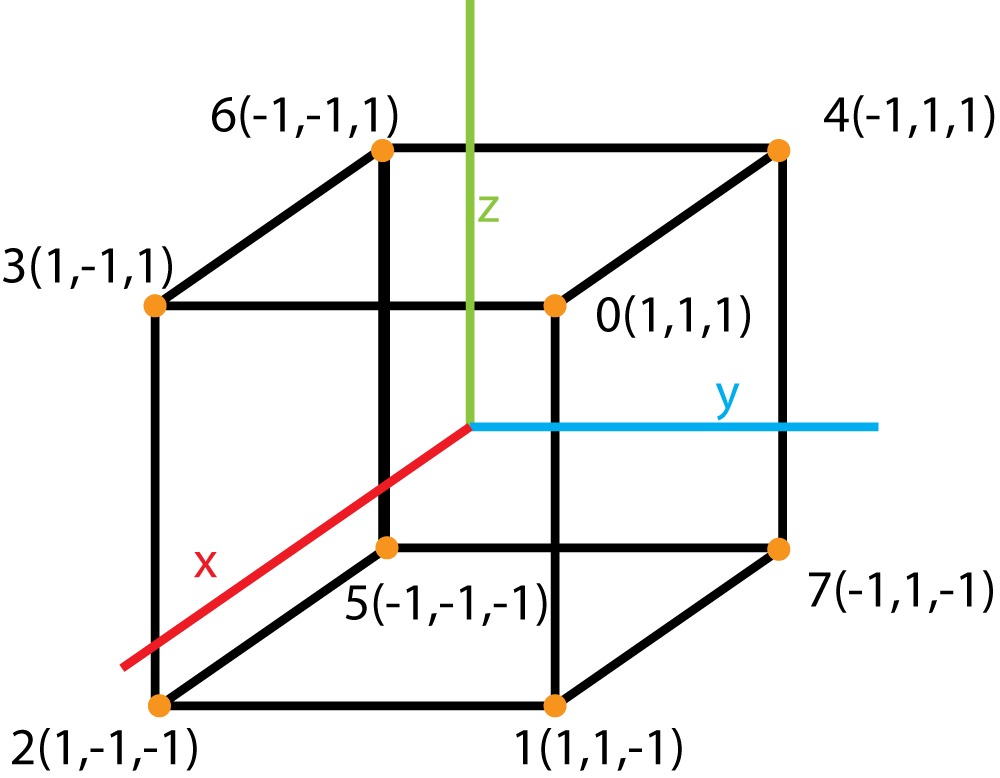 And if we want to make a solid cube, then we need to define the cube's quadrilaterals:

This is also intuitive - to make a quadrilateral on the top side of the cube, we'd want to "color" everything in-between the points 0, 3, 6, and 4.

Keep in mind there's an actual reason we label the vertices as indexes of the array they're defined in. This makes writing code that connects them very easy.

The following function is used to draw a wired cube:

glBegin() is a function that indicates we'll defining the vertices of a primitive in the code below. When we're done defining the primitive, we use the function glEnd().

GL_LINES is a macro that indicates we'll be drawing lines.

glVertex3fv() is a function that defines a vertex in space, there are a few versions of this function, so for the sake of clarity let's look at how the names are constructed:

Following similar logic, the following function is used to draw a solid cube:

For our program to be "killable" we need to insert the following code snippet:

It's basically just a listener that scrolls through PyGame's events, and if it detects that we clicked the "kill window" button, it quits the application.

We'll cover more of PyGame's events in a future article - this one was introduced right away because it would be quite uncomfortable for users and yourselves to have to fire up the task manager every time they want to quit the application.

In this example, we'll be using double buffering, which just means that we'll be using two buffers (you can think of them as canvases for drawing) which will swap in fixed intervals and give the illusion of motion.

Knowing this, our code has to have the following pattern:

glClear has to be used because if we don't use it, we'll be just painting over an already painted canvas, which in this case, is our screen and we're going to end up with a mess.

Next, if we want to continuously update our screen, just like an animation, we have to put all our code inside a while loop in which we:

In the previous article, we explained how, in theory, we need to construct a transformation that has a referral point.

OpenGL works the same way, as can be seen in the following code:

In this example, we did a z-axis rotation in the xy-plane with the center of rotation being (1,1,1) by 30 degrees.

Let's have a little refresher if these terms sound a bit confusing:

But there's a catch - OpenGL understands the code above by constantly remembering and modifying one global transformation matrix.

So when you write something in OpenGL, what you're saying is:

As you might imagine, this poses a huge problem, because sometimes we want to utilize a transformation on a single object, not on the whole source code. This is a very common reason for bugs in low-level OpenGL.

To combat this problematic feature of OpenGL, we're presented with pushing and popping transformation matrices - glPushMatrix() and glPopMatrix():

These work in a simple Last-in-First-Out (LIFO) principle. When we wish to perform a translation to a matrix, we first duplicate it and then push it on top of the stack of the transformation matrices.

In other words, it isolates all the transformations we're performing in this block by creating a local matrix that we can scrap after we're done.

Once the object is translated, we pop the transformation matrix from the stack, leaving the rest of the matrices untouched.

This means that the transformations are executed in reverse order. For example:

The code below draws a solid cube on the screen and continuously rotates it by 1 degree around the (1,1,1) vector. And it can be very easily modified to draw a wire cube by swapping out the cubeQuads with the cubeEdges:

Running this piece of code, a PyGame window will pop up, rendering the cube animation:

There is a lot more to learn about OpenGL - lighting, textures, advanced surface modeling, composite modular animation, and much more.

But fret not, all of this will be explained in the following articles teaching the public about OpenGL the proper way, from the ground up.

And don't worry, in the next article, we'll actually draw something semi-decent.