Creating a Neural Network from Scratch in Python

This is the first article in the series of articles on "Creating a Neural Network From Scratch in Python".

Have you ever wondered how chatbots like Siri, Alexa, and Cortona are able to respond to user queries? Or how the autonomous cars are able to drive themselves without any human help? All of these fancy products have one thing in common: Artificial Intelligence (AI). It is the AI which enables them to perform such tasks without being supervised or controlled by a human. But the question remains: "What is AI?" A simple answer to this question is: "AI is a combination of complex algorithms from the various mathematical domains such as Algebra, Calculus, and Probability and Statistics."

There are many deep learning libraries that can be used to create a neural network in a single line of code. However, if you really want to understand the in-depth working of a neural network, I suggest you learn how to code it from scratch in any programming language. Performing this exercise will really clear up many of the concepts for you. And this is exactly what we will do in this article.

Since this is an introductory article, the problem that we are going to solve is pretty simple. Suppose we have some information about obesity, smoking habits, and exercise habits of five people. We also know whether these people are diabetic or not. Our dataset looks like this:

In the above table, we have five columns: Person, Smoking, Obesity, Exercise, and Diabetic. Here 1 refers to true and 0 refers to false. For instance, the first person has values of 0, 1, 0 which means that the person doesn't smoke, is obese, and doesn't exercise. The person is also diabetic.

It is clearly evident from the dataset that a person's obesity is indicative of him being diabetic. Our task is to create a neural network that is able to predict whether an unknown person is diabetic or not given data about his exercise habits, obesity, and smoking habits. This is a type of supervised learning problem where we are given inputs and corresponding correct outputs and our task is to find the mapping between the inputs and the outputs.

Note: This is just a fictional dataset, in real life, obese people are not necessarily always diabetic.

In the beginning, the neural network makes some random predictions, these predictions are matched with the correct output and the error or the difference between the predicted values and the actual values is calculated. The function that finds the difference between the actual value and the propagated values is called the cost function. The cost here refers to the error. Our objective is to minimize the cost function. Training a neural network basically refers to minimizing the cost function. We will see how we can perform this task.

The neural network that we are going to create has the following visual representation. 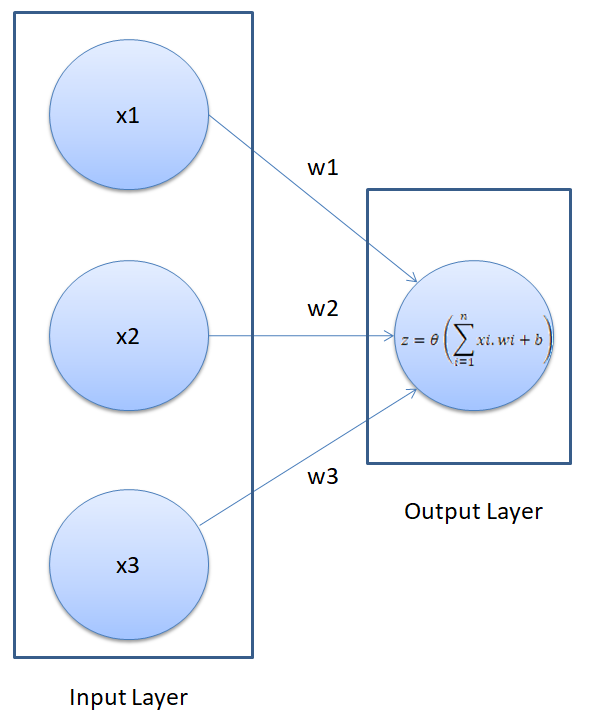 A neural network executes in two steps: Feed Forward and Back Propagation. We will discuss both of these steps in details.

In the feed-forward part of a neural network, predictions are made based on the values in the input nodes and the weights. If you look at the neural network in the above figure, you will see that we have three features in the dataset: smoking, obesity, and exercise, therefore we have three nodes in the first layer, also known as the input layer. We have replaced our feature names with the variable x, for generality in the figure above.

The weights of a neural network are basically the strings that we have to adjust in order to be able to correctly predict our output. For now, just remember that for each input feature, we have one weight.

The following are the steps that execute during the feedforward phase of a neural network:

Step 1: (Calculate the dot product between inputs and weights)

The bias term is very important here. Suppose if we have a person who doesn't smoke, is not obese, and doesn't exercise, the sum of the products of input nodes and weights will be zero. In that case, the output will always be zero no matter how much we train the algorithms. Therefore, in order to be able to make predictions, even if we do not have any non-zero information about the person, we need a bias term. The bias term is necessary to make a robust neural network.

Mathematically, in step 1, we perform the following calculation:

Step 2: (Pass the result from step 1 through an activation function)

Mathematically, the sigmoid function can be represented as:

Let us try to plot the sigmoid function: 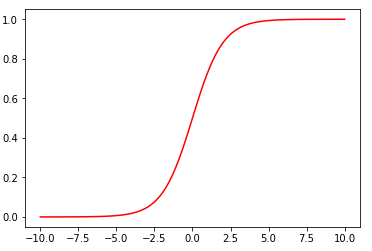 This sums up the feedforward part of our neural network. It is pretty straightforward. First we have to find the dot product of the input feature matrix with the weight matrix. Next, pass the result from the output through an activation function, which in this case is the sigmoid function. The result of the activation function is basically the predicted output for the input features.

In the beginning, before you do any training, the neural network makes random predictions which are far from correct.

There are several other ways to find the cost, but we will use the mean squared error cost function. A cost function is simply the function that finds the cost of the given predictions.

The mean squared error cost function can be mathematically represented as:

In order to minimize the cost, we need to find the weight and bias values for which the cost function returns the smallest value possible. The smaller the cost, the more correct our predictions are.

This is an optimization problem where we have to find the function minima.

On the other hand, if the cost is decreasing with an increase in weight, a negative value will be returned, which will be added to the existing weight value since negative into negative is positive.

In Equation 1, we can see there is an alpha symbol, which is multiplied by the gradient. This is called the learning rate. The learning rate defines how fast our algorithm learns. For more details about how learning rate can be defined, check out this article .

We need to repeat the execution of Equation 1 for all the weights and bias until the cost is minimized to the desirable level. In other words, we need to keep executing Equation 1 until we get such values for bias and weights, for which the cost function returns a value close to zero.

And that's pretty much it. Now is the time to implement what we have studied so far. We will create a simple neural network with one input and one output layer in Python.

In the above script, we create our feature set. It contains five records. Similarly, we created a labels set which contains corresponding labels for each record in the feature set. The labels are the answers we're trying to predict with the neural network.

The next step is to define hyper parameters for our neural network. Execute the following script to do so:

In the script above we used the random.seed function so that we can get the same random values whenever the script is executed.

In the next step, we initialize our weights with normally distributed random numbers. Since we have three features in the input, we have a vector of three weights. We then initialize the bias value with another random number. Finally, we set the learning rate to 0.05.

And the method that calculates the derivative of the sigmoid function is defined as follows:

Now we are ready to train our neural network that will be able to predict whether a person is obese or not.

Look at the following script:

Don't get intimidated by this code. I will explain it line by line.

In the first step, we define the number of epochs. An epoch is basically the number of times we want to train the algorithm on our data. We will train the algorithm on our data 20,000 times. I have tested this number and found that the error is pretty much minimized after 20,000 iterations. You can try with a different number. The ultimate goal is to minimize the error.

Next we store the values from the feature_set to the input variable. We then execute the following line:

Here we find the dot product of the input and the weight vector and add bias to it. This is Step 1 of the feedforward section.

We pass the dot product through the sigmoid activation function, as explained in Step 2 of the feedforward section. This completes the feed forward part of our algorithm.

Now is the time to start backpropagation. The variable z contains the predicted outputs. The first step of the backpropagation is to find the error. We do so in the following line:

We then print the error on the screen.

Now is the time to execute Step 2 of backpropagation, which is the gist of this code.

We know that our cost function is:

can be calculated as:

Here, 2 is constant and therefore can be ignored. This is basically the error which we already calculated. In the code, you can see the line:

Next we have to find:

Here "d_pred" is simply the sigmoid function and we have differentiated it with respect to input dot product "z". In the script, this is defined as:

Finally, we have to find:

Take a look at the following three lines:

Here we have the z_delta variable, which contains the product of dcost_dpred and dpred_dz. Instead of looping through each record and multiplying the input with corresponding z_delta, we take the transpose of the input feature matrix and multiply it with the z_delta. Finally, we multiply the learning rate variable lr with the derivative to increase the speed of convergence.

We then looped through each derivative value and update our bias values, as well as shown in this script:

Once the loop starts, you will see that the total error starts decreasing as shown below:

You can see that error is extremely small at the end of the training of our neural network. At this point of time our weights and bias will have values that can be used to detect whether a person is diabetic or not, based on his smoking habits, obesity, and exercise habits.

You can now try and predict the value of a single instance. Let's suppose we have a record of a patient that comes in who smokes, is not obese, and doesn't exercise. Let's find if he is likely to be diabetic or not. The input feature will look like this: [1,0,0].

In the output you will see:

You can see that the person is likely not diabetic since the value is much closer to 0 than 1.

Now let's test another person who doesn't, smoke, is obese, and doesn't exercises. The input feature vector will be [0,1,0]. Execute this script:

In the output you will see the following value:

You can see that the value is very close to 1, which is likely due to the person's obesity.

Want to learn more about creating neural networks to solve complex problems? If so, try checking out some other resources, like this online course: