Python for NLP: Introduction to the TextBlob Library

In this article, we will explore TextBlob, which is another extremely powerful NLP library for Python. TextBlob is built upon NLTK and provides an easy to use interface to the NLTK library. We will see how TextBlob can be used to perform a variety of NLP tasks ranging from parts-of-speech tagging to sentiment analysis, and language translation to text classification.

The detailed download instructions for the library can be found at the official link. I would suggest that you install the TextBlob library as well as the sample corpora.

Here is the gist of the instructions linked above, but be sure to check the official documentation for more instructions on installing if you need it:

And to install the corpora:

Let's now see the different functionalities of the TextBlob library.

Tokenization refers to splitting a large paragraph into sentences or words. Typically, a token refers to a word in a text document. Tokenization is pretty straight forward with TextBlob. All you have to do is import the TextBlob object from the textblob library, pass it the document that you want to tokenize, and then use the sentences and words attributes to get the tokenized sentences and attributes. Let's see this in action:

The first step is to import the TextBlob object:

The next step is to pass this document as a parameter to the TextBlob class. The returned object can then be used to tokenize the document to words and sentences.

Now to get the tokenized sentences, we can use the sentences attribute:

In the output, you will see the tokenized sentences along with the number of sentences.

Similarly, the words attribute returns the tokenized words in the document.

Lemmatization refers to reducing the word to its root form as found in a dictionary.

To perform lemmatization via TextBlob, you have to use the Word object from the textblob library, pass it the word that you want to lemmatize and then call the lemmatize method.

In the script above, we perform lemmatization on the words "apples", "media", and "greater". In the output, you will see the words "apple", (which is singular for the apple), "medium" (which is singular for the medium) and "great" (which is the positive degree for the word greater). Notice that for the word greater, we pass "a" as a parameter to the lemmatize method. This specifically tells the method that the word should be treated as an adjective. By default, the words are treated as nouns by the lemmatize() method. The complete list for the parts of speech components is as follows:

Like the spaCy and NLTK libraries, the TextBlob library also contains functionalities for the POS tagging.

To find POS tags for the words in a document, all you have to do is use the tags attribute as shown below:

In the script above, print the tags for all the words in the first paragraph of the Wikipedia article on Artificial Intelligence. The output of the script above looks like this:

The POS tags have been printed in the abbreviation form. To see the full form of each abbreviation, please consult this link.

Convert Text to Singular and Plural

TextBlob also allows you to convert text into a plural or singular form using the pluralize and singularize methods, respectively. Look at the following example:

In the output, you will see the plural of all the words:

Noun phrase extraction, as the name suggests, refers to extracting phrases that contain nouns. Let's find all the noun phrases in the first paragraph of the Wikipedia article on artificial intelligence that we used earlier.

To find noun phrases, you simply have to use the noun_phrase attributes on the TextBlob object. Look at the following example:

You can see all the noun phrases in our document.

Getting Words and Phrase Counts

In a previous section, we used Python's built-in len method to count the number of sentences, words and noun-phrases returned by the TextBlob object. We can use TextBlob's built-in methods for the same purpose.

To find the frequency of occurrence of a particular word, we have to pass the name of the word as the index to the word_counts list of the TextBlob object.

In the following example, we will count the number of instances of the word "intelligence" in the first paragraph of the Wikipedia article on Artificial Intelligence.

Another way is to simply call the count method on the words attribute, and pass the name of the word whose frequency of occurrence is to be found as shown below:

It is important to mention that by default the search is not case-sensitive. If you want your search to be case sensitive, you need to pass True as the value for the case_sensitive parameter, as shown below:

Like word counts, noun phrases can also be counted in the same way. The following example finds the phrase "artificial intelligence" in the paragraph.

In the output, you will see 2.

Converting to Upper and Lowercase

In the output, you will the string in the upper case:

Similarly to convert the text to lowercase, we can use the lower() method as shown below:

In TextBlob, N-grams can be found by passing the number of N-Grams to the ngrams method of the TextBlob object. Look at the following example:

This is especially helpful when training language models or doing any type of text prediction.

Spelling correction is one of the unique functionalities of the TextBlob library. With the correct method of the TextBlob object, you can correct all the spelling mistakes in your text. Look at the following example:

In the script above we made three spelling mistakes: "watchf" instead of "watch", "footbal" instead of "football", "neter" instead of "never". In the output, you will see that these mistakes have been corrected by TextBlob, as shown below:

One of the most powerful capabilities of the TextBlob library is to translate from one language to another. On the backend, the TextBlob language translator uses the Google Translate API

To translate from one language to another, you simply have to pass the text to the TextBlob object and then call the translate method on the object. The language code for the language that you want your text to be translated to is passed as a parameter to the method. Let's take a look at an example:

Let's take another example where we will translate from Arabic to English:

Finally, using the detect_language method, you can also detect the language of the sentence. Look at the following script:

In the output, you will see es, which stands for the Spanish language.

The language code for all the languages can be found at this link.

Suppose we have the following training and test data:

We will train our dataset on the train_data and will evaluate it on the test_data. To do so, we will use the NaiveBayesClassifier class from the textblob.classifiers library. The following script imports the library:

To train the model, we simply have to pass the training data to the constructor of the NaiveBayesClassifier class. The class will return an object trained on the dataset and capable of making predictions on the test set.

Let's first make a prediction on a single sentence. To do so, we need to call the classify method and pass it the sentence. Look at the following example:

It looks like a negative review. When you execute the above script, you will see neg in the output.

Similarly, the following script will return pos since the review is positive.

Finally, to find the accuracy of your algorithm on the test set, call the accuracy method on your classifier and pass it the test_data that we just created. Look at the following script:

In the output, you will see 0.66 which is the accuracy of the algorithm.

In this section, we will analyze the sentiment of the public reviews for different foods purchased via Amazon. We will use the TextBlob sentiment analyzer to do so.

The dataset can be downloaded from this Kaggle link.

As a first step, we need to import the dataset. We will only import the first 20,000 records due to memory constraints. You can import more records if you want. The following script imports the dataset:

To see how our dataset looks, we will use the head method of the pandas data frame:

From the output, you can see that the text review about the food is contained by the Text column. The score column contains ratings of the user for the particular product with 1 being the lowest and 5 being the highest rating.

Let's see the distribution of rating: 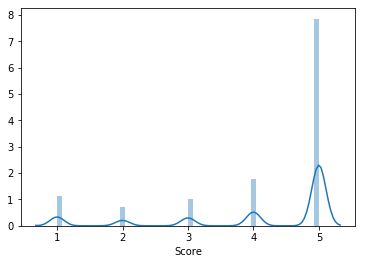 You can see that most of the ratings are highly positive i.e. 5. Let's plot the bar plot for the ratings to have a better look at the number of records for each rating. 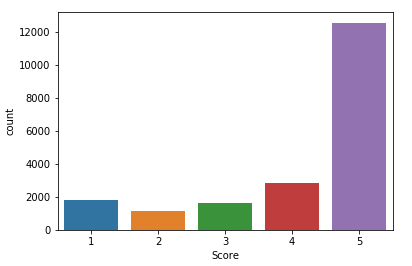 The output shows that more than half of reviews have 5-star ratings.

It looks like the review is positive. Let's verify this using the TextBlob library. To find the sentiment, we have to use the sentiment attribute of the TextBlog object. The sentiment object returns a tuple that contains polarity and subjectivity of the review.

Let's find the sentiment of the 350th review.

The output shows that the review is positive with a high subjectivity.

Let's now add a column for sentiment polarity in our dataset. Execute the following script:

Now let's see the distribution of polarity in our dataset. Execute the following script: 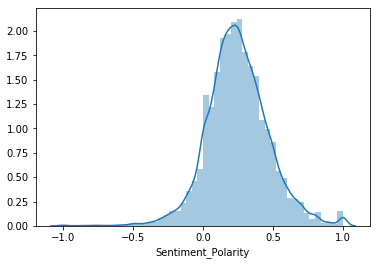 Let's now plot the average polarity for each score rating. 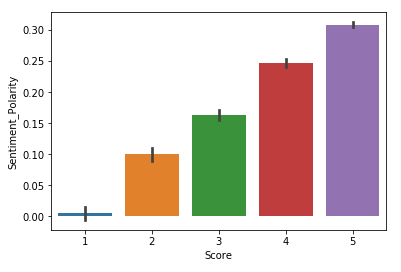 The output clearly shows that the reviews with high rating scores have high positive polarities.

Let's now see some of the most negative reviews i.e. the reviews with a polarity value of -1.

In the output, you will see the following review:

The output clearly shows that the review is highly negative.

Let's now see some of the most positive reviews. Execute the following script:

You can see that though the review was not very positive, it has been assigned a polarity of 1 due to the presence of words like excellent and reputation. It is important to know that sentiment analyzer is not 100% error-proof and might predict wrong sentiment in a few cases, such as the one we just saw.

Let's now see review number 223 which also has been marked as positive.

The output clearly depicts that the review is highly positive.

Python's TextBlob library is one of the most famous and widely used natural language processing libraries. This article explains several functionalities of the TextBlob library, such as tokenization, stemming, sentiment analysis, text classification and language translation in detail.

In the next article I'll go over the Pattern library, which provides a lot of really useful functions for determining attributes about sentences, as well as tools for retrieving data from social networks, Wikipedia, and search engines.