There are multiple ways to solve a problem using a computer program. For instance, there are several ways to sort items in an array. You can use merge sort, bubble sort, insertion sort, etc. All these algorithms have their own pros and cons. An algorithm can be thought of a procedure or formula to solve a particular problem. The question is, which algorithm to use to solve a specific problem when there exist multiple solutions to the problem?

In this article, we will briefly review algorithm analysis and Big-O notation. We will see how Big-O notation can be used to find algorithm complexity with the help of different Python functions.

Why is Algorithm Analysis Important?

To understand why algorithm analysis is important, we will take help of a simple example.

Suppose a manager gives a task to two of his employees to design an algorithm in Python that calculates the factorial of a number entered by the user.

The algorithm developed by the first employee looks like this:

The manager has to decide which algorithm to use. To do so, he has to find the complexity of the algorithm. One way to do so is by finding the time required to execute the algorithms.

The output says that the algorithm takes 9 microseconds (plus/minus 45 nanoseconds) per loop.

The execution time shows that the first algorithm is faster compared to the second algorithm involving recursion. This example shows the importance of algorithm analysis. In the case of large inputs, the performance difference can become more significant.

However, execution time is not a good metric to measure the complexity of an algorithm since it depends upon the hardware. A more objective complexity analysis metrics for the algorithms is needed. This is where Big O notation comes to play.

The following are some of the most common Big-O functions:

To get an idea of how Big-O notation in is calculated, let's take a look at some examples of constant, linear, and quadratic complexity.

Let's write a simple algorithm in Python that finds the square of the first item in the list and then prints it on the screen.

In the above script, irrespective of the input size, or the number of items in the input list items, the algorithm performs only 2 steps: Finding the square of the first element and printing the result on the screen. Hence, the complexity remains constant.

If you draw a line plot with the varying size of the items input on the x-axis and the number of steps on the y-axis, you will get a straight line. To visualize this, execute the following script: 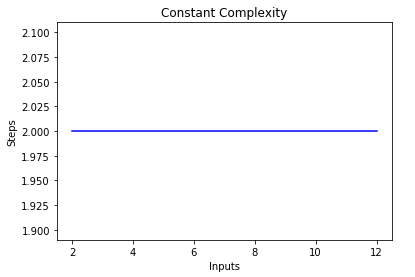 In this example, let's write a simple program that displays all items in the list to the console:

The plot for linear complexity with inputs on x-axis and # of steps on the x-axis is as follows: 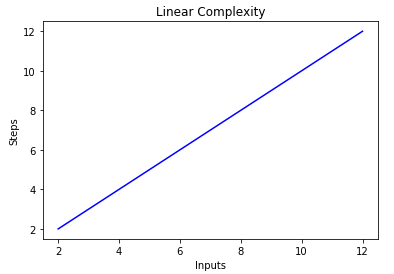 Another point to note here is that in case of a huge number of inputs the constants become insignificant. For instance, take a look at the following script:

In the script above, there are two for-loops that iterate over the input items list. Therefore the complexity of the algorithm becomes O(2n), however in case of infinite items in the input list, the twice of infinity is still equal to infinity, therefore we can ignore the constant 2 (since it is ultimately insignificant) and the complexity of the algorithm remains O(n).

We can further verify and visualize this by plotting the inputs on x-axis and the number of steps on y-axis as shown below:

In the script above, you can clearly see that y=2n, however the output is linear and looks like this: 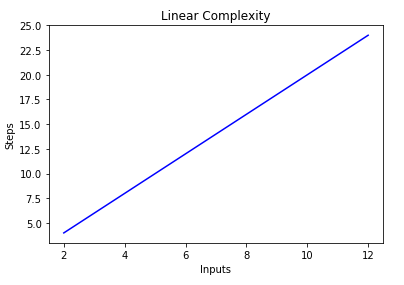 The following graph plots the number of inputs vs the steps for an algorithm with quadratic complexity. 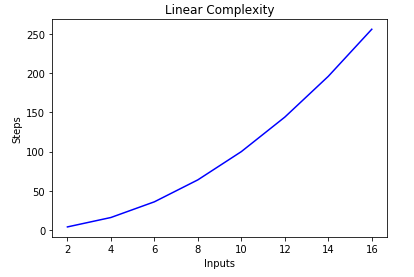 Finding the Complexity of Complex Functions

In the script above several tasks are being performed, first, a string is printed 5 times on the console using the print statement. Next, we print the input list twice on the screen and finally, another string is being printed three times on the console. To find the complexity of such an algorithm, we need to break down the algorithm code into parts and try to find the complexity of the individual pieces.

Let's break our script down into individual parts. In the first part we have:

The complexity of this part is O(5). Since five constant steps are being performed in this piece of code irrespective of the input.

We know the complexity of above piece of code is O(n).

Similarly, the complexity of the following piece of code is also O(n)

Finally, in the following piece of code, a string is being printed three times, hence the complexity is O(3)

To find the overall complexity, we simply have to add these individual complexities. Let's do so:

Simplifying above we get:

We said earlier that when the input (which has length n in this case) becomes extremely large, the constants become insignificant i.e. twice or half of the infinity still remains infinity. Therefore, we can ignore the constants. The final complexity of the algorithm will be O(n).

In addition to best and worst case complexity, you can also calculate the average complexity of an algorithm, which tells you "given a random input, what is the expected time complexity of the algorithm"?

Have a look at the following example:

In the script above, the function accepts a list of integers and returns a list with the corresponding squares of integers. The algorithm has to allocate memory for the same number of items as in the input list. Therefore, the space complexity of the algorithm becomes O(n).