This is the second article in the series of articles on "Creating a Neural Network From Scratch in Python".

If you are absolutely beginner to neural networks, you should read Part 1 of this series first (linked above). Once you are comfortable with the concepts explained in that article, you can come back and continue with this article.

In this article, we will build upon the concepts that we studied in Part 1 of this series and will develop a neural network with one input layer, one hidden layer, and one output layer. We will see that the neural network that we will develop will be capable of finding non-linear boundaries.

For this article, we need a non-linearly separable data. In other words, we need a dataset that cannot be classified using a straight line.

Luckily, Python's Scikit Learn library comes with a variety of tools that can be used to automatically generate different types of datasets.

Execute the following script to generate the dataset that we are going to use, in order to train and test our neural network.

In the script above we import the datasets class from the sklearn library. To create non-linear dataset of 100 data-points, we use the make_moons method and pass it 100 as the first parameter. The method returns a dataset, which when plotted contains two interleaving half circles, as shown in the figure below: 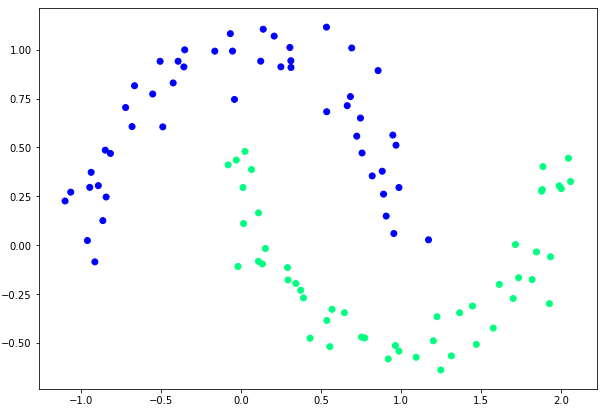 You can clearly see that this data cannot be separated by a single straight line, hence the perceptron cannot be used to correctly classify this data.

Let's verify this concept. To do so, we'll use a simple perceptron with one input layer and one output layer (the one we created in the last article) and try to classify our "moons" dataset. Execute the following script:

You will see that the value of mean squared error will not converge beyond 4.17 percent, no matter what you do. This indicates to us that we can't possibly correctly classify all points of the dataset using this perceptron, no matter what we do.

Neural Networks with One Hidden Layer 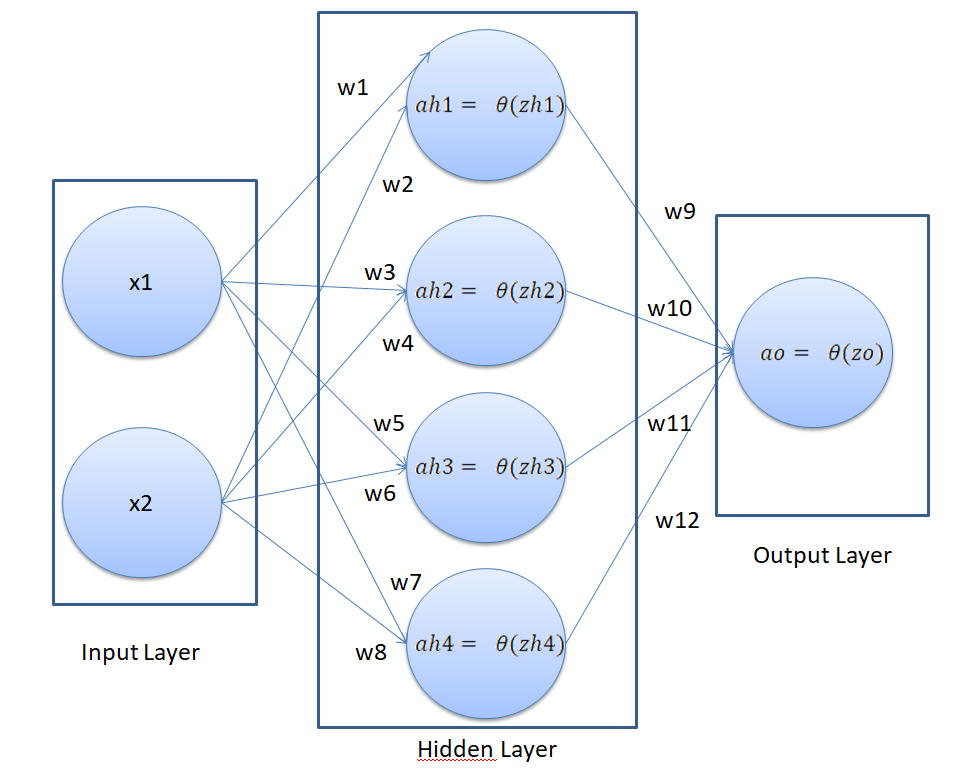 No matter how many nodes and hidden layers are there in the neural network, the basic working principle remains the same. You start with the feed-forward phase where inputs from the previous layer are multiplied with the corresponding weights and are passed through the activation function to get the final value for the corresponding node in the next layer. This process is repeated for all the hidden layers until the output is calculated. In the back-propagation phase, the predicted output is compared with the actual output and the cost of error is calculated. The purpose is to minimize the cost function.

This is pretty straight-forward if there is no hidden layer involved as we saw in the previous article.

However, if one or more hidden layers are involved, the process becomes a bit more complex because the error has to be propagated back to more than one layer since weights in all the layers are contributing towards the final output.

In this article, we will see how to perform feed-forward and back-propagation steps for the neural network having one or more hidden layers.

For each record, we have two features "x1" and "x2". To calculate the values for each node in the hidden layer, we have to multiply the input with the corresponding weights of the node for which we are calculating the value. We then pass the dot product through an activation function to get the final value.

Here "a0" is the final output of our neural network. Remember that the activation function that we are using is the sigmoid function, as we did in the previous article.

Note: For the sake of simplicity, we did not add a bias term to each weight. You will see that the neural network with hidden layer will perform better than the perceptron, even without the bias term.

In the back-propagation phase, we will first define our loss function. We will be using the mean squared error cost function. It can be represented mathematically as:

In the first phase of back propagation, we need to update weights of the output layer i.e w9, w10, w11, and w12. So for the time being, just consider that our neural network has the following part: 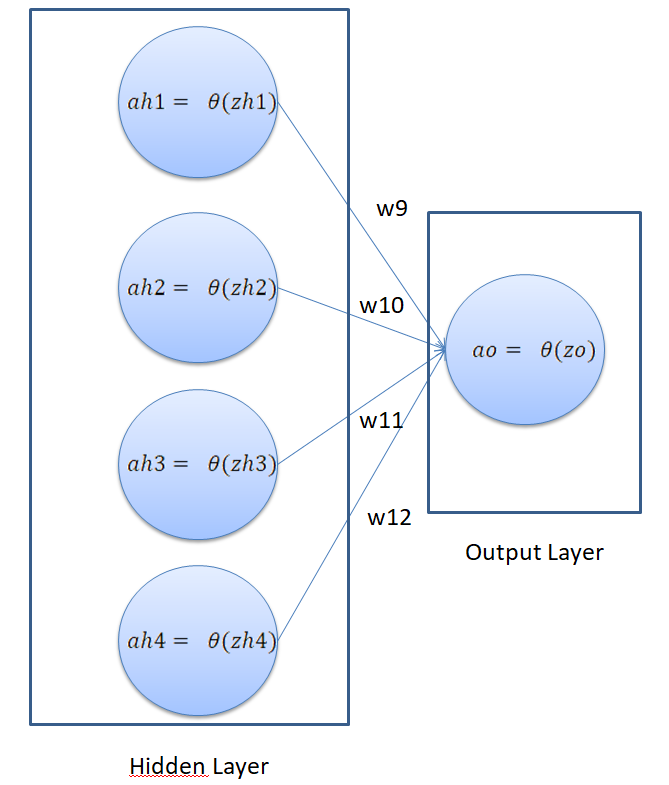 This looks similar to the perceptron that we developed in the last article. The purpose of the first phase of back propagation is to update weights w9, w10, w11, and w12 in such a way that the final error is minimized. This is an optimization problem where we have to find the function minima for our cost function.

In our neural network, the predicted output is represented by "ao". Which means that we have to basically minimize this function:

The differentiation of the cost function with respect to weights in the output layer can be mathematically represented as follows using the chain rule of differentiation.

Here "wo" refers to the weights in the output layer. The letter "d" at the start of each term refers to derivative.

Let's find the value for each expression in Equation 1.

Here 2 and n are constant. If we ignore them, we have the following equation.

Next, we can find "dao" with respect to "dzo" as follows:

Finally, we need to find "dzo" with respect to "dwo". The derivative is simply the inputs coming from the hidden layer as shown below:

Let's collectively denote hidden layer weights as "wh". We basically have to differentiate the cost function with respect to "wh". Mathematically we can use chain rule of differentiation to represent it as:

Here again we will break Equation 2 into individual terms.

Let's again break the Equation 3 into individual terms. Using the chain rule again, we can differentiate "dcost" with respect to "dzo" as follows:

Now we need to find dzo/dah from Equation 3. If we look at zo, it has the following value:

Now we can find the value of dcost/dah by replacing the values from Equations 7 and 4 in Equation 3.

Coming back to Equation 2, we have yet to find dah/dzh and dzh/dwh.

One of the reasons that neural networks are slower than the other machine learning algorithms is the fact that lots of computations are being performed at the back end. Our neural network had just one hidden layer with four nodes, two inputs and one output, yet we had to perform lengthy derivation and multiplication operations, in order to update the weights for a single iteration. In real world, neural networks can have hundreds of layers with hundreds of inputs and output values. Therefore, neural networks execute slowly.

Code for Neural Networks with One Hidden Layer

Now let's implement the neural network that we just discussed in Python from scratch. You will clearly see the correspondence between the code snippets and the theory that we discussed in the previous section. We will again try to classify the non-linear data that we created in the Dataset section of the article. Take a look at the following script.

In the script above we start by importing the desired libraries and then we create our dataset. Next, we define the sigmoid function along with its derivative. We then initialize the hidden layer and output layer weights with random values. The learning rate is 0.5. I tried different learning rates and found that 0.5 is a good value.

We then execute the algorithm for 2000 epochs. Inside each epoch, we first perform the feed-forward operation. The code snippet for the feed forward operation is as follows:

As discussed in theory section, back propagation consists of two phases. In the first phase, the gradients for the output layer weights are calculated. The following script executes in the first phase of the back-propagation.

Finally, the weights are updated in the following script:

When the above script executes, you will see minimum mean squared error value of 1.50 which is less than our previous mean squared error of 4.17, which was obtained using the perceptron. This shows that the neural network with hidden layers performs better in the case of non-linearly separable data.

However, we may need to classify data into more than two categories. In our next article, we will see how to create a neural network from scratch in Python for multi-class classification problems.