Hierarchical Clustering with Python and Scikit-Learn

In this article we will focus on agglomerative clustering that involves the bottom-up approach.

Following are the steps involved in agglomerative clustering:

Role of Dendrograms for Hierarchical Clustering

In the last section, we said that once one large cluster is formed by the combination of small clusters, dendrograms of the cluster are used to actually split the cluster into multiple clusters of related data points. Let's see how it's actually done.

Suppose we have a collection of data points represented by a numpy array as follows:

Let's plot the above data points. To do so, execute the following code:

The script above draws the data points in the X numpy array and label data points from 1 to 10. In the image below you'll see that the plot that is generated from this code: 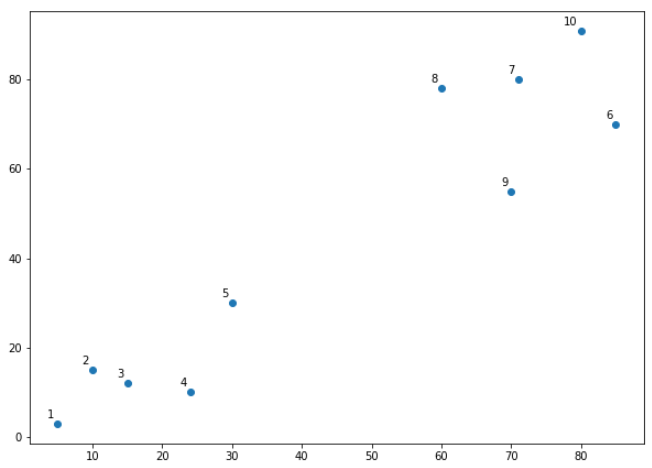 However, in the real world, we may have thousands of data points in many more than 2 dimensions. In that case it would not be possible to spot clusters with the naked eye. This is why clustering algorithms have been developed.

Coming back to use of dendrograms in hierarchical clustering, let's draw the dendrograms for our data points. We will use the scipy library for that purpose. Execute the following script:

The output graph looks like the one below. Let's name this plot Graph2. 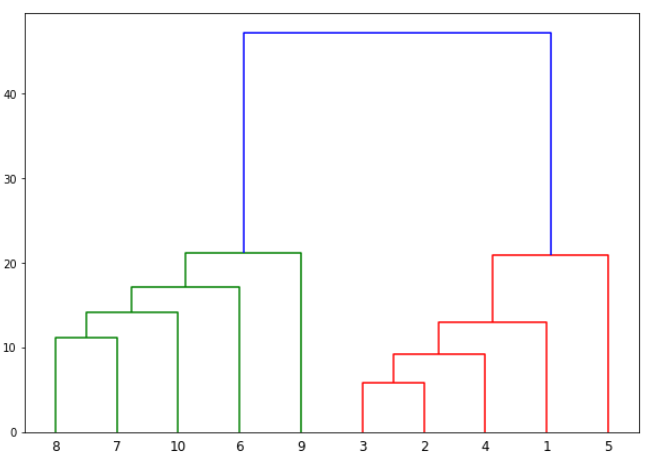 The next step is to join the cluster formed by joining two points to the next nearest cluster or point which in turn results in another cluster. If you look at Graph1, point 4 is closest to cluster of point 2 and 3, therefore in Graph2 dendrogram is generated by joining point 4 with dendrogram of point 2 and 3. This process continues until all the points are joined together to form one big cluster. 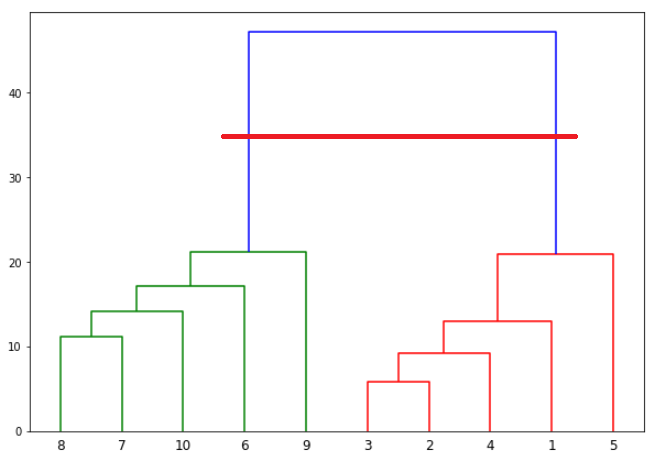 We can see that the largest vertical distance without any horizontal line passing through it is represented by blue line. So we draw a new horizontal red line that passes through the blue line. Since it crosses the blue line at two points, therefore the number of clusters will be 2.

Basically the horizontal line is a threshold, which defines the minimum distance required to be a separate cluster. If we draw a line further down, the threshold required to be a new cluster will be decreased and more clusters will be formed as see in the image below: 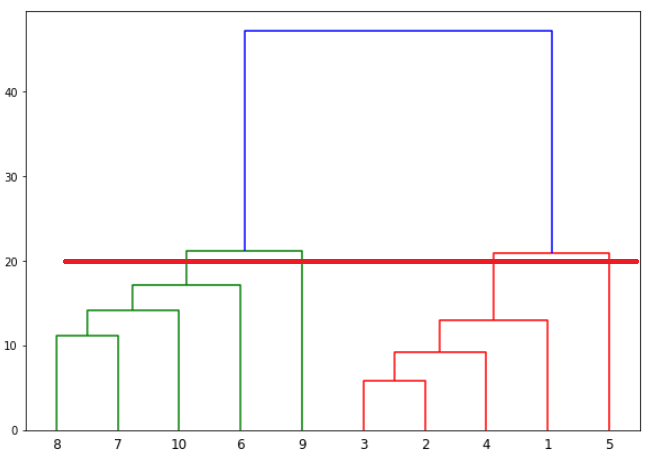 In the above plot, the horizontal line passes through four vertical lines resulting in four clusters: cluster of points 6,7,8 and 10, cluster of points 3,2,4 and points 9 and 5 will be treated as single point clusters.

In our first example we will cluster the X numpy array of data points that we created in the previous section.

The process of clustering is similar to any other unsupervised machine learning algorithm. We start by importing the required libraries:

The next step is to import or create the dataset. In this example, we'll use the following example data:

The next step is to import the class for clustering and call its fit_predict method to predict the clusters that each data point belongs to.

In the code above we import the AgglomerativeClustering class from the "sklearn.cluster" library. The number of parameters is set to 2 using the n_clusters parameter while the affinity is set to "euclidean" (distance between the datapoints). Finally linkage parameter is set to "ward", which minimizes the variant between the clusters.

Next we call the fit_predict method from the AgglomerativeClustering class variable cluster. This method returns the names of the clusters that each data point belongs to. Execute the following script to see how the data points have been clustered.

The output is a one-dimensional array of 10 elements corresponding to the clusters assigned to our 10 data points.

Finally, let's plot our clusters. To do so, execute the following code: 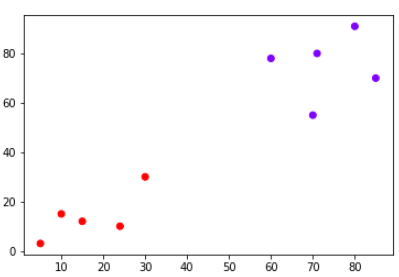 The problem that we are going to solve in this section is to segment customers into different groups based on their shopping trends.

The dataset for this problem can be downloaded from the following link:

Place the downloaded "shopping-data.csv" file into the "Datasets" folder of the "D" directory. To cluster this data into groups we will follow the same steps that we performed in the previous section.

Execute the following script to import the desired libraries:

Next, to import the dataset for this example, run the following code:

Let's explore our dataset a bit. To check the number of records and attributes, execute the following script:

The script above will return (200, 5) which means that the dataset contains 200 records and 5 attributes.

To eyeball the dataset, execute the head() function of the data frame. Take a look at the following script:

Our dataset has five columns: CustomerID, Genre, Age, Annual Income, and Spending Score. To view the results in two-dimensional feature space, we will retain only two of these five columns. We can remove CustomerID column, Genre, and Age column. We will retain the Annual Income (in thousands of dollars) and Spending Score (1-100) columns. The Spending Score column signifies how often a person spends money in a mall on a scale of 1 to 100 with 100 being the highest spender. Execute the following script to filter the first three columns from our dataset:

Next, we need to know the clusters that we want our data to be split to. We will again use the scipy library to create the dendrograms for our dataset. Execute the following script to do so:

In the script above we import the hierarchy class of the scipy.cluster library as shc. The hierarchy class has a dendrogram method which takes the value returned by the linkage method of the same class. The linkage method takes the dataset and the method to minimize distances as parameters. We use 'ward' as the method since it minimizes then variants of distances between the clusters. 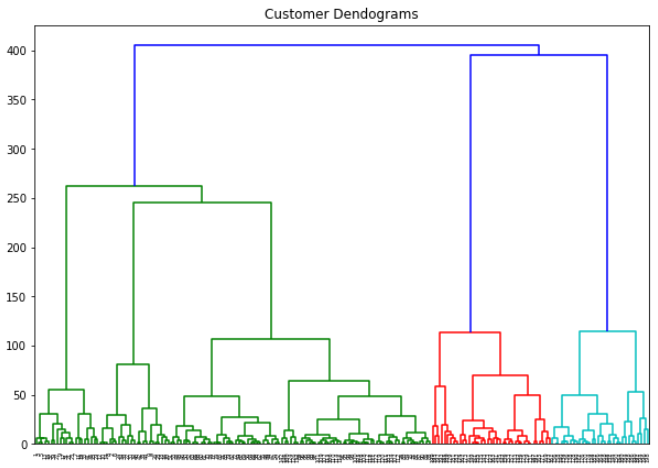 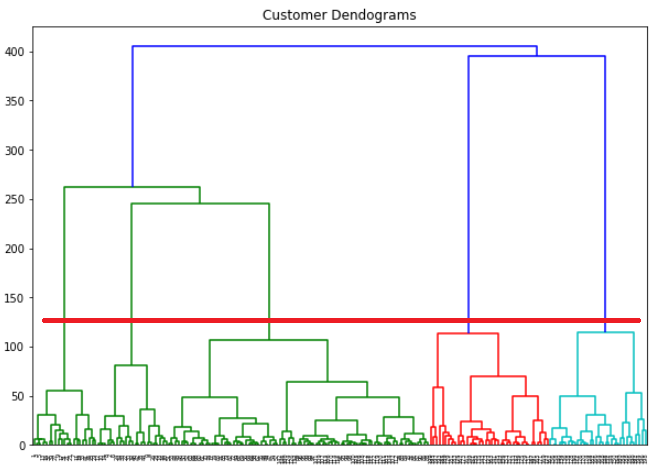 Now we know the number of clusters for our dataset, the next step is to group the data points into these five clusters. To do so we will again use the AgglomerativeClustering class of the sklearn.cluster library. Take a look at the following script:

You can see the cluster labels from all of your data points. Since we had five clusters, we have five labels in the output i.e. 0 to 4.

As a final step, let's plot the clusters to see how actually our data has been clustered:

The output of the code above looks like this: 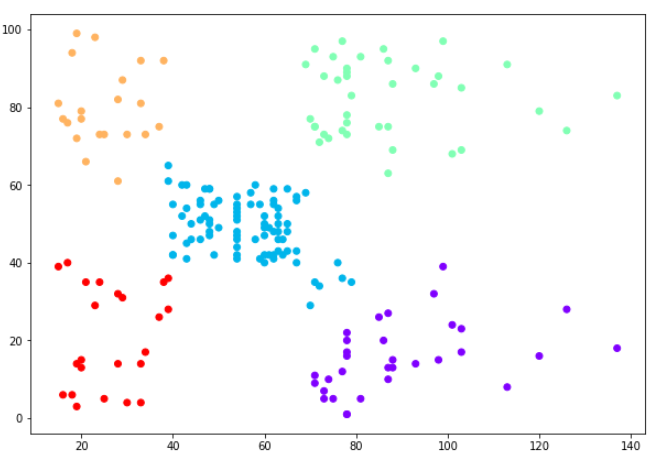 Between all of the different Python packages (pandas, matplotlib, numpy, and sklearn) there is a lot of info in this article that might be hard to follow, and for that reason we recommend checking out some more detailed resources on doing data science tasks with Python, such as an online course:

We've found that these resources are good enough that you'll come away with a solid understanding of how to use them in your own work.

In this article we explained hierarchical clustering with help of two examples. For more machine learning and data science articles, keep visiting this site. Happy Coding!