In this tutorial, we're going to learn how to use Bokeh library in Python. Most of you would have heard of matplotlib, numpy, seaborn, etc. as they are very popular python libraries for graphics and visualizations. What distinguishes Bokeh from these libraries is that it allows dynamic visualization, which is supported by modern browsers (because it renders graphics using JS and HTML), and hence can be used for web applications with a very high level of interactivity.

Bokeh is available in R and Scala language as well; however, its Python counterpart is more commonly used than others.

The easiest way to install Boken using Python is through pip package manager. If you have pip installed in your system, run the following command to download and install Bokeh:

Note: If you choose this method of installation, you need to have numpy installed in your system already

Another method to install Bokeh is through Anaconda distribution. Simply go to your terminal or command prompt and run this command:

After completing this step, run the following command to ensure that your installation was successful:

If the above command runs successfully i.e. the version gets printed, then you can go ahead and use bokeh library in your programs.

In this part, we will be doing some hands-on examples by calling Bokeh library's functions to create interactive visualizations. Let's start by trying to make a square.

Note: Comments in the codes throughout this article are very important; they will not only explain the code but also convey other meaningful information. Furthermore, there might be 'alternative' or additional functionality that would be commented out, but you can try running it by uncommenting those lines.

Here we specify the x and y coordinates for points, which will be followed in sequence when the line is being drawn. The figure function instantiates a figure object, which stores the configurations of the graph you wish to plot. Here we can specify both the X range and Y range of the graph, which we set from 0 to 4, which covers the range of our data. The line method then draws a line between our coordinates, which is in the shape of a square.

When you run the above script, you should see the following square opening in a new tab of your default browser. 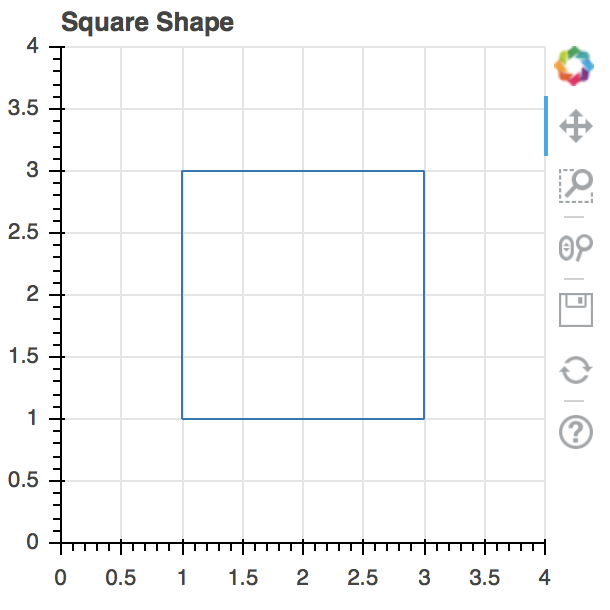 In the image above, you can see the tools on the right side (pan, box zoom, wheel zoom, save, reset, help - from top to bottom); these tools enable you to interact with the graph.

The reset_output method resets the figure ID that the show function currently holds so that a new one can be assigned to it.

What we've done so far is rather basic, let's now try to make multiple lines/map equations in a single graph. The most basic example for that would be to try and draw lines for the equations y = x, y = x^2, and y = x^3. So let's see how we can make a graph to display them all at once using Bokeh: 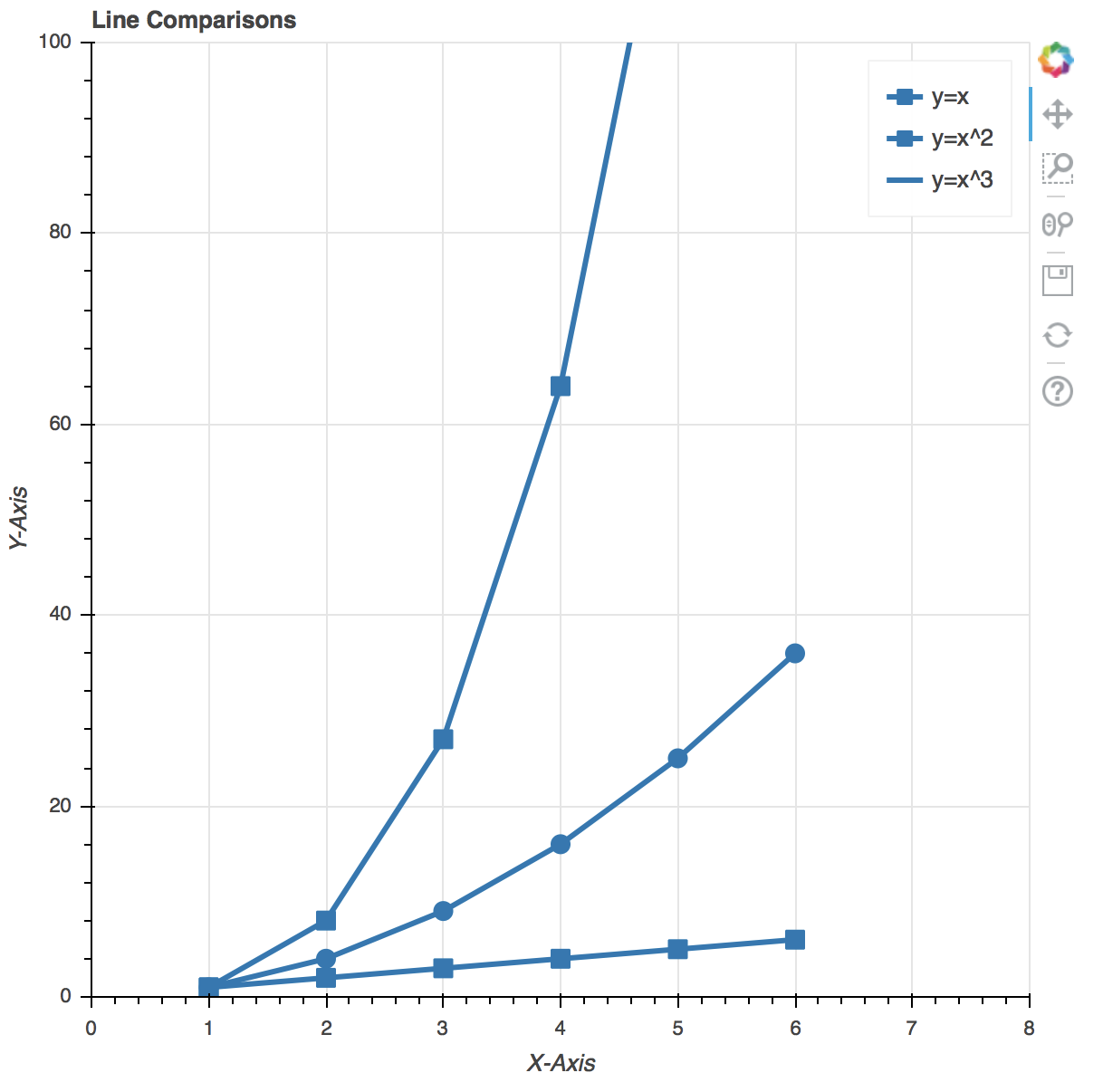 Before we continue to plot a few more graphics, let's first learn a few cool tricks to make your graphics more interactive, as well as aesthetic. For that we'll first of all learn about the different tools that the Bokeh Library uses apart from the ones that are displayed alongside (either on top or on the right side) the graph. The explanations will be provided in the comments of the code below: 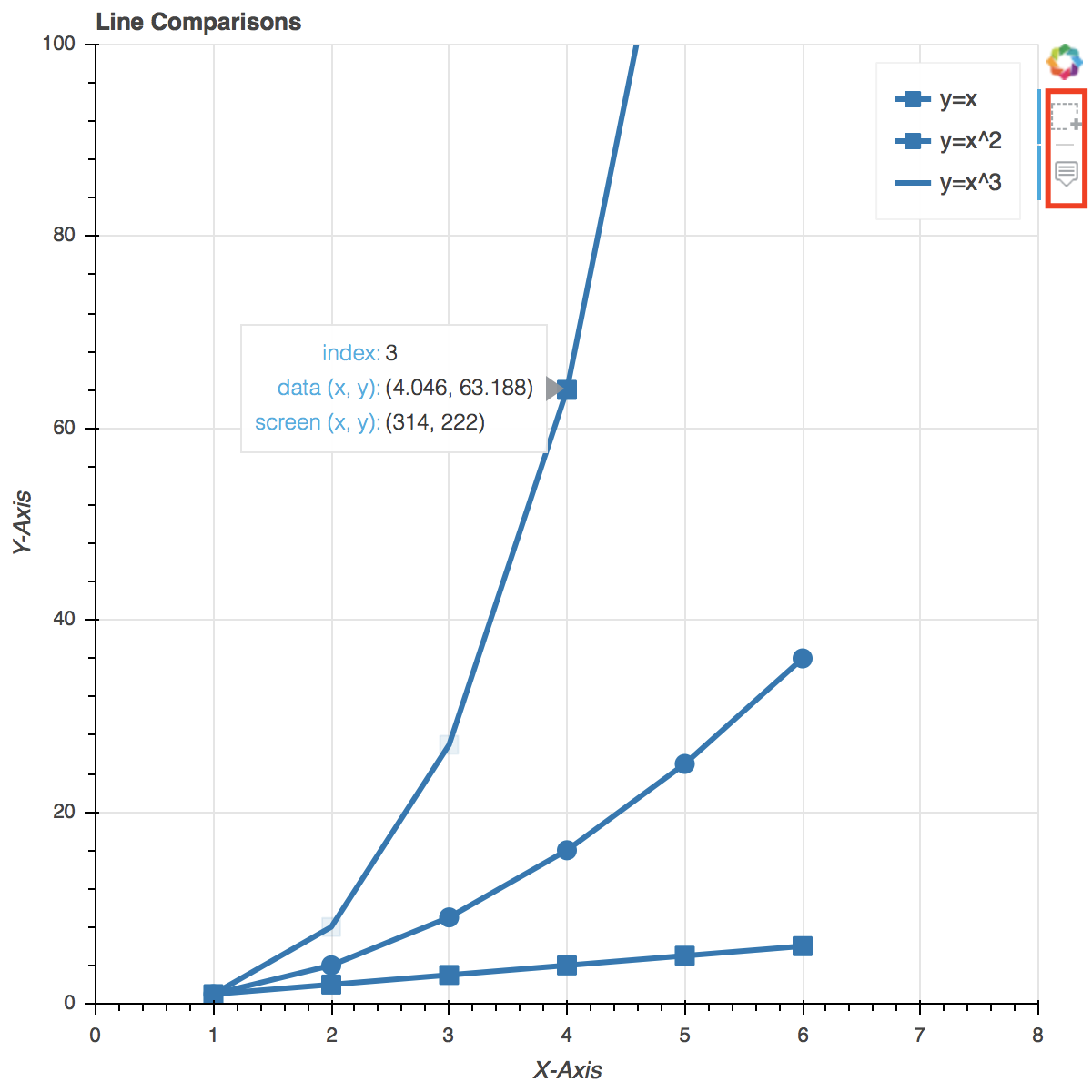 In the above picture, you can see the two extra options added to the previously available tools. You can now also hover over any data point and its details will be shown, and you can also select a certain group of data points to highlight them.

Next thing that we'll learn to do using Bokeh library is handling categorical data. For that, we'll try and make a bar chart first. To make it interesting, let's try and create a chart which represents the number of world cups won by Argentina, Brazil, Spain, and Portugal. Sounds interesting? Let's code it.

Do you notice something in the graph above? It's quite simple, and unimpressive, no? Let's make some changes in the above code, and make it a bit more colorful and aesthetic. Bokeh has a lot of options to help us with that. Let's see what we can do with it:

Evidently, the new graph looks a lot better than before, with added interactivity.

Before concluding this article, I'd like to let you all know that this was just a glimpse of the functionality that Bokeh offers. There are tons of other cool things that you can do with it, and you should try them out by referring to Bokeh's documentation and following the available examples.

Although, there are a lot of other great resources out there other than the documentation, like Data Visualization in Python. Here you'll get an even more in-depth guide to Bokeh, as well as 8 other visualization libraries in Python.

To sum it up, in this tutorial we learned about the Bokeh library's Python variant. We saw how to download and install it using the pip or anaconda distribution. We used Bokeh library programs to make interactive and dynamic visualizations of different types and using different data types as well. We also learned, by seeing practical examples, the reason why Bokeh is needed even though there are other more popular visualization libraries like matplotlib and Seaborn available. In short, Bokeh is very resourceful and can pretty much do all kinds of interactive visualizations that you may want.